What do 500Startups and Sequoia Capital have in common?

Sequoia is very active in China, India, and Israel. Sequoia does growth. But Sequoia does not do seed, instead working closely with Y Combinator and pioneering a secretive “scout” program that we uncovered four years ago and then the journal re-uncovered last year.

Still, Sequoia is one of the last firms I’d think of when I hear the words “Spray and Pray.”

500Startups on the other hand was a firm started to invest widely not only in the US, but around the world, and around the world in places that even firms like Sequoia don’t go. It not only does seed, it has an incubator.

Dave McClure’s pitch on 500Startups was that venture capital was broken and instead of going for huge home runs he was gonna go for base hits. He compared himself of course, to the Oakland Athletics. If you’ve read your Money Ball, you know that Billy Beane also developed talent like Jason Giambi and brought it aging sluggers like the Big Hurt because he prized home runs too. Home runs are great when three guys have walked on base just before him.

But where McClure and Beane agree: Good things can only happen when you get on base so you should get on base as much as possible.

The styles of McClure and Sequoia could not be more different. To stretch the baseball analogy, 500Startups would have a mascot that was like some kind of loud swearing peg leg pirate, and Sequoia’s mascot would wipe its brow with trillion dollar bills, talk in hushed intense tones during crucial game play, and have a monocle. Do not expect cheerleading from Mr. Sequoia. Expect Pirate 500Startups to be on top of the dugout doing a goofy dance with a T-shirt cannon.

So which of these two would you guess was the most active global venture firm of 2015, the year we’re calling peak venture capital? Sequoia Capital, not 500Startups, according to Pitchbook’s annual report.

Sequoia Capital: Higher than 500Startups, higher than the original venture megafund NEA, and way higher than Andreessen Horowitz. Note: Benchmark nowhere to be found on any charts in this report. It says it doesn’t do volume, and it doesn’t.

Now the key there is the word global. If you look at US only, Sequoia’s tally falls substantially and it starts to look deliberate compared to its Valley bretheren. 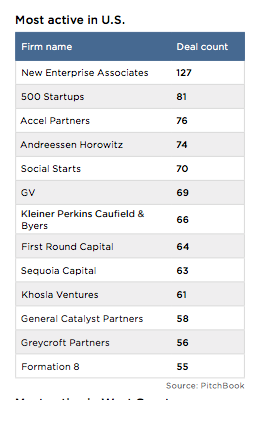 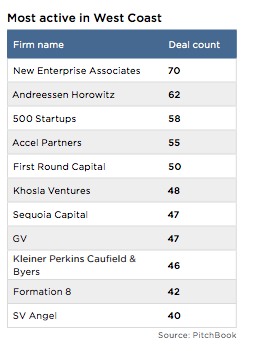 We think of Sequoia as so dominant in the Valley, it’s remarkable how much international has taken over the firm, at least in terms of deal volume.

One place that neither of these firms are investing is healthcare. I found the charts on most active healthcare investors interesting because other than NEA, there are no firms shared between the two categories: 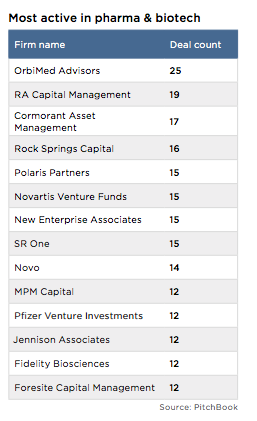 For most of the history of venture capital, a risk on high tech was seen as a similar type of gamble as a risk on a new drug. But the Internet forever drove a wedge between the life sciences and IT teams. When I first started covering the industry in the peak of the dot com bubble, firms were just starting to split from one another. Many firms bet that once the crash hit, the IT teams would crave the more stable, predictable healthcare side of the house. That didn’t turn out to be the case and the two disciplines have only gotten more distinct.

There are a few other interesting charts in this survey. This one showed that traditional VCs have really lost interest in hardware over the last year. No doubt disappointments like Ouya and Romotive and legions of Indiegogo scams have put a chill on the excitement around funding  things that do well on crowdfunded sites. And while FitBit was one of the better IPOs last year, Jawbone continues to struggle in near enough the same category with more money and equally good investors. 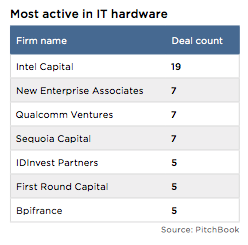 Like the saying goes: Hardware is hard. Firms may do a deal here or there, but only Intel Capital appears to be betting heavily on it.