MyFitnessPal's restaurant finder could be a game-changer

As I mentioned yesterday, our several month tests of various on demand and non demand food services had an unintended consequence: I gained 15 pounds.

These services are convenient, reasonably affordable and mostly delicious. But they are not low calorie. One meal has half the calories I used to eat in a day.

So years after I killed myself to lose the weight of two babies, two books, and my 30s, I’m back on a much older, less sexy prepared meal plan, Jenny Craig, and tracking every calorie I consume via MyFitnessPal.

I’ve discovered something surprising: MyFitnessPal seems to have innovated at an accelerated pace since its acquisition by UnderAmour a year ago.

The first is on the latest iPhone your steps are logged automatically. No need to wear a fitness tracker, plug it in, sync it and download an API to connect the two-- all things I had to do when I first used the app. And my little old iPhone seems to track my movements far better than my old UP used to. It shows steps even if I’m pushing a stroller, pulling a wagon, carrying a kid or have my hand in some other artificially fixed position.

It proves what many have long argued: These killer apps of fitness trackers for everyday folks are pretty replaceable, and not just by the Apple Watch, but an iPhone and a free app.

There is so much that’s depressing about tracking calories, suddenly opening the app and seeing you’ve gained back another chasing your kids all day or walking in between meetings 300 is nice. And since it’s such a passive part of the experience that requires you doing, wearing or downloading nothing new, it’s like a little “hey! you can have a glass of wine and not gain weight!” surprise.

The second is potentially more game changing. Unfortunately, it doesn’t yet work nearly as well. But I have hope.

MyFitnessPal has finally found a good reason to use your location: Restaurants. It can now show you nearby restaurants, you can pull up their menus and either make smarter calorie decisions or log what you just ate.

This is a game changer if you are trying to accurately record calories because restaurants are where it always goes wrong. It’s impossible to know what everything has been cooked in or with without turning into a bad SNL skit. One tablespoon of Olive Oil you didn’t account for can mean you are over or under your goal for the day, FFS.

This is a big reason that so many bullshit devices to “scan” calories keep getting funded. People want desperately to believe there is a way to know other than guessing and logging. There is not. And only large chains like McDonalds have to disclose it. And if you are eating at McDonalds that much, let’s face it. You probably aren’t on too strict of a diet.

The problem is the feature isn’t very good…. yet. MyFitnessPal has always relied on the crowd to upload calorie data that isn’t immediately barcode scannable. They’ve requested menus and the resulting calorie counts seem mostly like guesswork.

I ordered an Ike’s turkey sandwich the other day and got this: 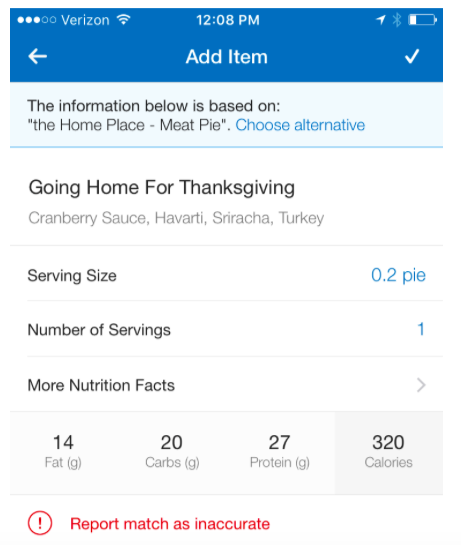 I don’t know what that sandwich has to do with a meat pie -- other than both sound delicious and I really shouldn’t be eating either when I’m trying to lose weight-- but it is most certainly not a mere 320 calories. If only. However the Tim Lincecum sandwich seemed to be logged accurately at some 600 calories. It had many of the same ingredients, so I logged that one instead.

This feature will get better. But my guess is where it’s going is towards proactively making more healthy recommendations. Last year in an interview with Pando, MyFitnessPal’s co-founder Mike Lee described where he wanted to take things.

Mike: We have this incredible view on food, that not only the nutritional contents, but what combination they're eaten in, what health outcomes they lead to, and even where they're eaten.

Sarah: It would be great to even know, if I am flying in to Chicago and I'm going to be in the airport for an hour. Where I can go to have something healthy?

Mike: Yes, absolutely. Yeah. People on the quantified self bandwagon focus on data, but it's much more about what you can do with it. What you just talked about, that's a great use case. We should be able to help you solve that problem. The data that you're logging will help us do that. That's the kind of thing we're working on it. That's exactly the kind of problem that we want to solve.

It's about making it easy.

You can move someone’s motivation, but it's hard. People smoke and they know it's going to kill them. It's a lot easier, we think, to just make it easier. In Chicago, in the airport, it should be easy for you to find something healthy.

Sarah: Yeah, I have 300 calories left, where can I get a sandwich?

Mike: Exactly. If you can't do that, that's enough of a barrier that you will make an unhealthy decision. Those are the kinds of things that we think about all the time. That is where data gets really interesting.

Movement is a super interesting data set, I think. What if you were at the elevator here? This is a product concept, we're not doing it today, but just imagine if you had Google Glass or something. All of a sudden, as we're going to the elevator, a glowing line will show you, here's how you go down the stairs, and here's the extra number of calories that you would burn. It's just a little nudge, right? But you need the data to be able to create that kind of experience for something.

The app may never tell me how many calories are in a Flour + Water pasta dish. But if it can tell me where I can get a lunch in the Chicago airport for under 300 calories and how far of a walk it is, that’d be almost better.

When I go to Flour + Water, I know I’m not adhering to any diet. It’s a splurge. The annoying times you break your diet are when you just need food and you don’t have time to find a healthy option.