As the rest of the gig economy squeezes its workforce, once-hated 99designs looks downright cuddly

Remember when 99designs used to be considered the Internet’s most egregious abuse of contract labor?

Seriously, you only had to write a story about 99designs and your email, Twitter feed and comments would get blown up for days. How dare they offer a platform by which graphic designers could set their own fees and find clients then get paid in a timely fashion!

To be fair, the scandal around 99designs was more nuanced. It was specifically around “spec work” or designers competing to win a logo contest. The concern: It cheapened what they do because they may not get paid, if their design wasn’t chosen. And if it was, it was for a cheaper rate. And 99designs took a cut.

As the gig economy has sought bigger and bigger market opportunities, it has expanded from labor with specific skills to labor anyone can do. From “Hey! You are a coder! how about get paid by the job with oDesk!” to “Hey! You are a designer, pick up extra cash banging out logos with 99designs!” to “Hey! You are able bodied how about come move my furniture” to “Hey! You’ve got a car can you take me to the airport!” to “Hey! You have a bike go get my Chinese food!” And the wages keep falling with each iteration, while the cuts of the platforms-- along with their fundraising ability and valuations-- increases.

Today the king of the sharing economy and vast recipient of most of its investment dollars Uber fights off a unionization drive, as it cuts workers rates below what cabs were paid in the 1970s, expecting drivers to make it up in volume, while real safety concerns are raised about both cabs and Uber drivers working a dangerous amount of hours to make ends meet. Meanwhile 99designs is going in the opposite direction. The fastest growing part of its business are companies working one-on-one with specific designers on bigger jobs than just a logo. As a result the average shopping cart on 99designs has gone from $330 to over $500. It pays out $3.5m per month to designers, with 1.2 million of them in their community.

About 18 months ago, the company started to notice the shift and decided to reorient the company and its site around it. Today, it’s rolling out a rebrand, redesign and-- oh yeah-- a company who has probably brought you more startup logos than anyone finally replaced its old one.

The new focus? Being the place where designers and clients have an ongoing relationship, beyond just logos, contests and spec work.

99designs has ridden the waves of Silicon Valley austerity, boom and newly found austerity both as a startup and a logo supplier to them. It was originally bootstrapped out of Australia, and one of those companies Accel found and hunted as part of its late stage/ never raised capital portfolio that also includes Prezi, Atlassian, Lynda.com, Lightspeed, and Qualtrics. [Disclosure: Accel is a Pando investor]

One reason Accel was so hot on the deal? It was 2011 and so many of its startups were using the service. Asana, Task Rabbit, and any small startup that was celebrating an era of capital efficiency, moving fast and breaking things, and trying to get an initial product out as cheaply and quickly as possible.

How that changed over the last four years of unicorns and heavily funded companies with multiple designers on staff. Remember the grand Homerian epic Wired wrote about Uber’s new logo? The one that was supposed to make Uber seem nicer but really just had bad kerning that looked like a butt?

So how did 99designs keep growing by double digits amid this shift? Well a lot of small businesses and regular old horse startups were still using it, in addition to a surprising new client base: Agencies. That’s right, the same guys 99designs was supposedly disrupting.

Agencies began using 99designs to get in more of its own freelancers on big jobs, giving themselves more staffing flexibility, says CEO Patrick Llewellyn.

Today 15% of the business are so called “1-to-1 projects” where a client is working directly with one designer, not putting a project out for a wild contest-bid. And it’s the fastest growing part of the business.

The new site highlights some of the more active designers on the platform and the work they’ve done, along with providing a work space for the two to collaborate.

Of course, there’s also a nod to 99designs roots about it: They put their own logo redesign out for bid to some 4,000 designers. The response was slightly overwhelming according to Llewellyn. And some of the designers were a little chagrined with the simple design the company chose: 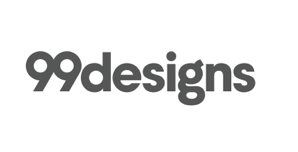 But Llewellen defends the decision by saying they didn’t want their design to be the focus, but rather the work on the site. It’s far better than the old logo…

Believe it or not it’s the first redesign the design company has ever done. (Insert cobbler’s kids have no shoes joke here…)

The gamble of 99designs’ future is whether ongoing, larger projects will still operate through its platform or just start working directly, without a middleman. Here’s where 99designs story diverges even further from the rest of the gig economy. It recently took out of its terms of service any language forbidding it. Instead, it tries to make staying on the site as valuable as possible. For one thing, your work is more likely to be featured on the homepage, the more work you do through 99designs and the more repeat work you do. The site also handles all the billing and communication and serves as a middleman if someone doesn’t pay or deliver work.

And here’s the thing: 99designs only charges 9% on follow up work. Sure designers can email and PayPal, but they’d only bring that down by a few percentage points, Llewellyn argues. And, 99designs lets designers set their rates, and all their other employment terms.

Compared to the 35% or so Uber takes for a far smaller hourly wage with no driver control, once controversial 99designs looks like what the gig economy always promised: A place where you can actually be your own boss.

Of course, it’s also growing far slower than Uber with nowhere close to the money raised or valuation. But 99designs has never had unicorn ambitions. It has grown steadily by double digits for the last five years, and was one of the first companies to take the plunge to move over to Oakland when rents got sky high in San Francisco. It’s only raised $45 million, and the bulk of that went to secondaries, similar to the deal Accel did with Atlassian back in 2010. It’s always had the mindset of a bootstrapped company, helping other bootstrapped companies get affordable design work from up and coming bootstrapped designers who need the cash.

Contrast that to a company like Uber that has a Scrooge McDuck like vault of billions while its drivers make less than $1 per mile.

That alignment of purpose may be the reason 99designs eventually lost its stigma, while the rest of the “sharing economy” has brought the first real union fights to Silicon Valley.