Funding for female founders increasing. But what do we mean by “founder”?

Call me a cynic when it comes to women’s issues, but VCs love nothing more than “hacking” a problem. For those of us who don’t strut around in hoodies that typically means “a quick fix.” A way to solve the problem without actually solving it.

And becoming an industry more welcoming of women and minorities is a big problem. Tech companies have been pressured to release woeful diversity stats, meantime research after research shows the benefits of having women on your management team.

Companies have undergone unconscious bias training, and venture firms are starting to hire more female partners, after research showed that firms with one female partner are twice as likely to fund more women. Greylock recently hired Sarah Tavel formerly of Pinterest, and First Round recently hired Haley Barna formerly of Birchbox. One male serial entrepreneur I know who was hoping to make a career transition to a big venture firm recently bemoaned to me: “No one is hiring a white guy as partner for a long time.”

I don’t worry about him too much. If the world had tilted that much, it’d be what we call a good problem to have. But the point is: The pressure is being felt.

Enter the latest data from Pitchbook, showing that female founders have grabbed the highest amount of venture capital, at some 18%. While small, it’s nowhere near as depressing as other stats showing between 3% and 6%. For Europe and North America the number of venture funded female founders was record setting.

Certainly, I’m not going to complain about any consistent data set that shows this kind of steady increase in women getting more opportunity: 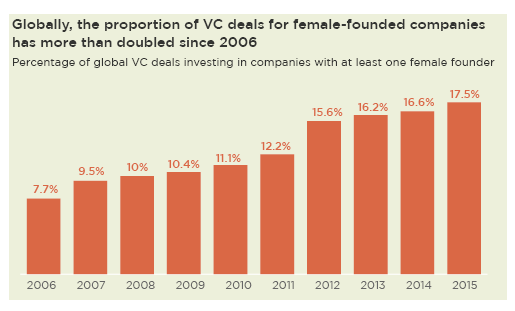 But assuming the data is accurate, there’s one flaw in the methodology: That pesky word “founder.” What exactly a founder is has been stretched and stretched in the last few years. Sean Parker is called a “founder” of Facebook, even though he joined well after it was started. Reid Hoffman argued that Jeff Weiner, LinkedIn’s current CEO, should be considered a “co-founder” of sorts, despite joining very late in the company’s life. Much of Tinder’s fight with Whitney Wolfe was around the use of the term “founder.”

“Founding team” is even more vague: It simply refers to the first people you hire.

There was even a cynical trend over the last seven or eight years in the Valley to throw a woman on your “founding team” just to fill out the diversity numbers. She is frequently relegated to the marketing side of a startup, is almost never the CEO, and doesn’t have equal economics to the other founders.

Now is that progress of a type? Sure. Ask anyone who the most influential role model women in tech are and they’ll say Marissa Mayer and Sheryl Sandberg. Only one of those is a CEO. You don’t have to be the top boss in order to change how women are viewed in the Valley and become a role model for other women who want a career in tech.

But any numbers looking at the “founding team” or “founders” aren’t the same as companies with women CEOs. That means it may or may not really be the same as “funding more women.” The Diana Project explains why. It’s data isn’t nearly as up to date as Pitchbook’s but it found that in 2013 some 18% of venture funded companies had women on their executive teams-- likely a similar data set to “founding teams.” But VC backed companies with women as CEOs represented less than 3% of deals.

The Diana Project went on to explain that the bulk of these were late stage and profitable companies. The kind where VCs had to rely less on a “gut feeling” to write a check.

Indeed, Pitchbook’s data shows that of that total number of female funded deals, the vast majority went to gender mixed teams. In fact, investment in female only teams actually declined as a percentage of the group:

It also bears noting that none of the VCs we consider in the top five or top ten were among the most active in backing female founders:

Again, I’ll take any progress. But let’s be precise about how female founders are making it.