The hot money has left the building

All last year the startup world was clicking to the top of the rollercoaster, quarter by quarter, mega-deal by mega-deal, unicorn by unicorn.

With each click, it was worrying about whether or not it was the top and what was coming next.

OK, this has gotta be it…right?

Just in case, a huge crash was coming that would make all those clicks look crazy in hindsight, VCs had a helpful scapegoat: The late stage money that was really driving up all those deals. The mutual funds. The hedge funds. The corporates. Foreign capital. “The tourists,” as they are derisively called.

While it’s accurate that most traditional VCs were not doing the craziest of the crazy unicorn rounds, they certainly benefited from these “tourists.” Their companies were able to raise capital at huge valuations with minimal dilution and weren’t forced to risk an IPO. If those late stage valuations get written down? No big deal for the VCs. Most of them were in early enough they’ll still make money.

As Pitchbook reported a big group of “tourists”-- the hedge funds-- have seriously soured on venture capital deals this year. Their interest peaked when mega deals peaked and has fallen since. It’s a clear sign that mega-deals, uprounds and unicorn births will also be low when the first quarter numbers come in.

Check out this graph: 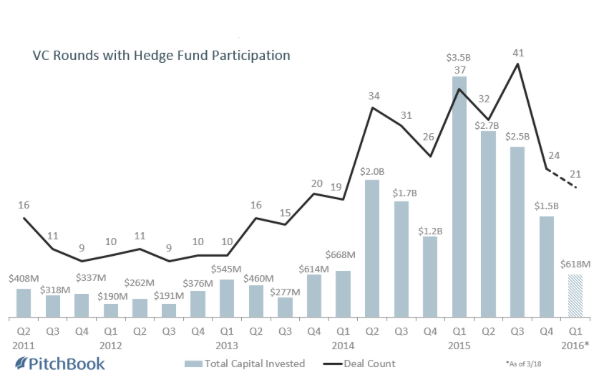 That’s a precipitous fall, particularly quarter over quarter. From Pitchbook:

Hedge funds have participated in venture deals worth just $617.8 million and involving only 21 startups in 2016 so far. This represents a massive change in pace from the same quarter last year, when VC deals with hedge fund involvement took in $3.5 billion ($4.4B including Tiger) across 37 rounds.

For comparison sake, venture capital’s decline over the same period was a far more modest 17% from the second quarter to the fourth quarter of last year.

And it comes at a particularly woeful time for mega-corporate acquisitions and IPOs. As we reported a few weeks ago, some 40% of  unicorns need to start raising their next rounds within the next six months-- exactly the time the biggest pool of late stage capital seems to be vanishing.

The rollercoaster hasn’t started its decent yet...