Internet music pure-plays are actually helping the RIAA. Google, on the other hand...
By Sarah Lacy
Mar 23, 2016 · 4 minutes

Last August at the Outside Lands Music festival in Golden Gate Park, I had a conversation with Cary Sherman.

The conversation was jovial, a lot of nodding and agreement. That alone was surprising because Sherman is the head of the Recording Industry Association of America and I’m 40 years old. That means I was not so long ago a, poor, music stealing college grad in the Napster era. I was conditioned and trained to hate Sherman and all he stood for, the same way Nancy Reagan convinced me if I did cocaine once I’d be living in a cardboard box the next day, my brain a fried egg.

Plenty of people disagree with the logic or morality, but the war on drugs and war on Cary Sherman were both very effective on me.

More surprising than the fact that Sherman didn’t have horns or a tail and made some pretty good points about the state of the industry was where he was standing: In a Pandora sponsored cabana. A few years ago, that would have been unimaginable.

An announcement yesterday by the RIAA makes clear part of the reason: Thanks in large part to streaming, the bloodletting of the music industry seems to have stopped. Revenues in 2015 were up .9% to $7 billion. It was the growth of streaming that offset the decline in sales of both digital and physical products. That was the retail value. At wholesale, the market was up .8% to $4.85 billion, the fifth year the wholesale market has grown.

For the first time streaming was the largest chunk of revenues, making up some 34.3% of the market, slightly higher than digital downloads. Streaming itself grew a whopping 30%.

The bad news is that per stream rates are lower. And likely the biggest culprit of that is the largest and worst-paying major service of all: YouTube. As Sherman pointed out in his letter, vinyl sales are kinder to artists: 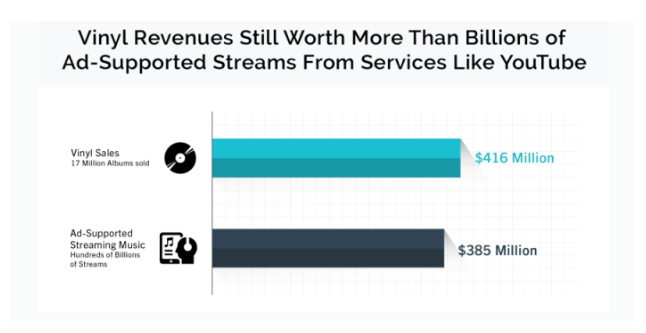 Still, as the Internet and digital music have evolved, so too has the willingness of users to pay something. And with it the attitudes of the RIAA and the digital music pure-plays have changed towards one another.

And that’s saying something: The RIAA blamed digital internet pure plays for ruining its industry, and VCs in turn argue the RIAA bled their companies out of money in unsustainable licensing deals. If we’ve achieved this, peace in the Middle East may be possible.

Spotify has probably played a bigger role than any other single company in getting us here. It was the first company that sought to work with the industry, versus Disruption! as Daniel Ek detailed at length in our PandoMonthly interview several years ago.

While many people in the music industry still blame Spotify and Pandora for low royalties three things are certain:

Many in the tech world who’ve been driven out of business by Google’s ability to subsidize free Web products, can likely relate to Sherman. The RIAA has made some noise about pulling music from YouTube, but in reality, Google has it over a barrel, and everyone knows it.

There may only be one thing that could stop Google, as we’ve written before: Europe.

It took almost all of my adult life for the Internet to deliver on the promise to save music after it destroyed it-- and a lot of people in the industry hardly feel “saved.” Likewise, Pandora is rumored to be on the block, Rdio just went bust, and no one knows if Spotify will live up to that hefty private valuation once it goes public-- particularly in an era of Apple Music.

For those who still feel $10 a month is too much to spend to have the bulk of your music wherever you want whenever you want, consider this: The entire retail value of the whole of the recording industry is just $7 billion. Think of how much music is all around us-- at sporting events, in the car, in commercials. I play pop songs for my kids at night as a reward for good behavior. I get my aggression out to loud music at SoulCycle. I listen to sappy songs when I want to cry. Music can evoke more powerful memories than nearly any other sense. If all the RIAA wants from me to keep that machine going is a $10 Spotify subscription, I can do that.