Huh? Median US valuations actually increased in the first quarter

Yesterday, I wrote about how only one little measly $17 billion stat made this quarter a quarter to cheer about in tech: How much money VCs had raised. It was the largest quarter in three years, in fact. While stocks have only now recovered from one of the worst beginnings of a year since the year 2000, IPOs have been in a deep freeze and venture funding-- we’re told-- is being done at some 30% cheaper valuations.

Only, it turns out that last one isn’t true for all of you. Pitchbook released a head fuck of a report yesterday -- sorry to repeat the phrase, but I struggle to come up with another one-- that showed that median US valuations actually increased in the first quarter. With the exception of Series B deals, they hit a new high.

Every VC has been swanning around saying, “Loooooooooooook, great companies will still get funded, they just need to accept that they are worth 30% less than they thought….” And this seemed to be anecdotally backed up. We saw this play out with DoorDash for one. While mutual funds slashed more than a dozen others.

So how could this chart be real? 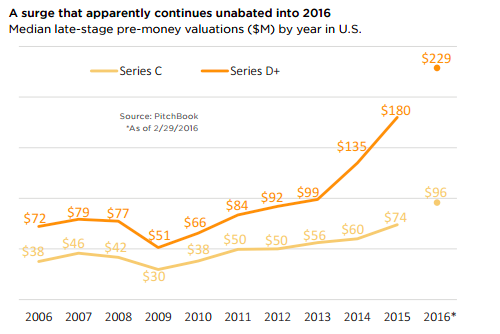 Because reporters love to invent an answer even where there may not be one, let me give you three possible suggestions.

Kevin wrote this about the public markets last week:

All of this sounds pretty good, as if the worst is behind us, even. And one hopes that it is, that the headwinds from other regions and industries were abating, that the US economy — seven years after the last US recession — could still eke out a few more years of growth, and that investors remain cheery enough to overlook once again the high valuations that have long been part and parcel of tech growth stocks.

As nice as it would be if that were the case, there are reasons to think that we are instead in a classic bear-market rally, during which stocks not only bounce back, but the stocks that have fallen the hardest typically bounce back the most. One reason for this phenomenon is that investors who have been shorting less promising shares close out their positions, triggering short-term buying demand for them.

I tend to agree on the private markets. Hot money is out. Mutual funds are writing down stocks. Nearly every VC is arguing their portfolio is overvalued.

At some point it can’t keep going up. That’s just not the startup economy.