Speaking to CNBC, Katrina Pierson -- who, you'll recall, once referred to President Obama as a "half-breed" -- suggested that Zuckerberg was a hypocrite to talk about immigration.

"I think I'll take Mark Zuckerberg seriously when he gives up all of his private security, moves out of his posh neighborhood, and comes live in a modest neighborhood near a border town, and then I'm sure his attitude would change,"

The jab against Zuckerberg for having private security to insulate him from the world might have some merit. The Facebook founder -- who has been directly threatened by ISIS -- does have a lot of security. As, of course, does Donald Trump who is protected by the United States Secret Service. The only real difference between the two men on that score is that Trump's safety is paid for by the US taxpayer, whereas Zuckerberg and Facebook pay privately for his safety team.

BUT, the wheels really come off Pierson's criticism after that first comma. For one thing, love him or hate him, Zuckerberg has done more personally for immigration reform that virtually any other white tech CEO. He is a major backer of Fwd.us and has been praised by none other than Jose Antonio Vargas for his work with undocumented Americans. Hell, Zuckerberg has repeatedly cited his work tutoring undocumented Americans as his inspiration for co-founding Fwd.us. His white, richness notwithstanding, it's very, very hard to suggest that Zuckerberg is insulating himself from immigrants.

But the real boneheaded part of Pierson's rebuttal is "moves out of his posh neighborhood, and comes live in a modest neighborhood near a border town."

In 2012, Zuckeberg and his (now) wife did almost exactly that. They moved their primary residence from swanky Palo Alto to San Francisco's Mission District. And before Team Trump plays the "but does he really live there?" card, there have been countless reports of Zuckerberg and his family wandering around the Mission. There have also been endless complaints from Mission residents about all that famous Zuckerberg security, idling at all hours of the day or night. So, yes, he does.

For those, like Donald Trump, who don't live in San Francisco and, apparently, don't understand what that means, here's a handy demographic chart for the Mission, courtesy of the most recent census... 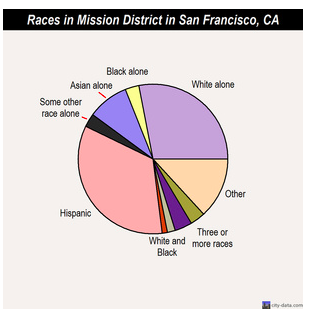 In other words, there are plenty of ways to attack Zuckerberg's anti-Trump comments. For my money, the best is to ask why he feels so comfortable attacking Donald Trump but won't say a word against Narendra Modi. But suggesting he should move to a less fancy, more diverse neighborhood than THE FUCKING MISSION is just insane.