The two spoilers in the much anticipated startup downturn? Corporate and international VCs

The first quarter was less about a downturn, and more about a shift in power.
By Sarah Lacy
Apr 13, 2016 · 6 minutes

Whenever research groups release their quarterly numbers there are always a few predictable story lines to seize on.

There are the overall numbers, of course. According to today’s release by CB Insights, the number of deals slid once again, while in North America at least the dollar amount ticked up just slightly from the fourth quarter to the first quarter. But we reported that off Pitchbook’s numbers last week, declaring that was more of a continuing trend of VCs playing larger bets with existing companies than it was any bubble popping.

There’s also the angle that only five new unicorns were minted in this past quarter-- and only one out of North America.

There’s the continuing decline of late stage deals, and yet a handful of big deals dominated the landscape. Just ten deals made up some $3 billion of the total $15.2 billion invested in North America. Without those deals, it would have been a far bleaker quarter, and some have argued several of those deals-- including DoorDash’s funding-- were in the works in 2015, they simply took longer to close. If true, that could signal a further decline in the second quarter.

There’s the strange fact that Series A deals took up more share of deals in the US than seed deals for the first time in several quarters. Indeed, overall early stage deals represented the biggest chunk of money, as the As that got done swelled in size to anticipate an uncertain funding climate.

And expect much to be made of the fact that New York actually saw a rise in deals, unlike California and Massachusetts. There’s the tightest delta between deals done in California and those done in New York that we’ve ever seen. 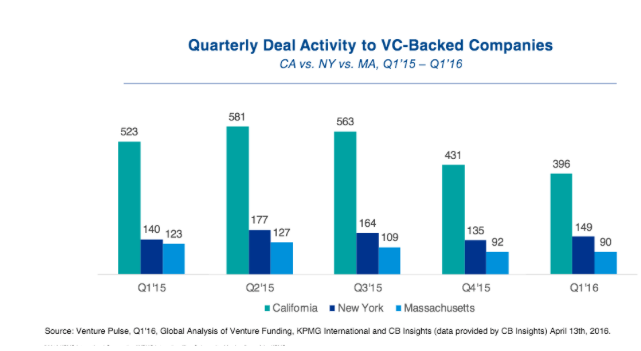 But I want to talk about power. Afterall, valuations and terms and amounts are all really dictated more by power in the venture world than they are by what a startup is-- or even could be-- doing. And for years founders have had most of the power. Many founders running companies today haven’t ever had to compete in a climate where raising capital was even a challenge.

Now that’s shifting. In this not-nearly-a-crash-but-definitely-a-deceleration stage, it’s interesting to think about how much of this may just be a shift in power more than it is a shift in any company fundamentals.

There’s still been no catalyst. No exploded IPO that couldn’t get out. Just “meh” results. VCs -- of course-- have plenty of capital. All those justifications for funding the unicorns to begin with like the rise of global smartphone usage are just as much trends today as they were in 2015. And on the private company side, we’ve seen little more than the normal attrition of companies that weren’t working. The worst of the “flame outs” this year has been Zenefits, which is humbled, but still very much in business with a new, more impressive board of directors.

VCs have mostly willed this deceleration into place. And in the process, it’s allowing them to take back power. Imagine how things have shifted in 2016: Public companies had the worst start to the year since the dot com crash, fewer private deals got done, and yet VCs had the largest quarter for raising new capital into their own funds in a decade.

Things look good for VCs in early 2016. They can use the macro mood to slow down deal making dramatically even for the largest deals in the offing, like DoorDash. They can pay lower prices because overall fewer deals are getting done quarter-on-quarter for most of the last year now. And hedge funds and mutual funds have pulled back dramatically, making VCs once again in control of “venture capital” funding. And thanks to the last three months, they have more money to invest than they have in a long time.

VCs have more power and control than they have in years.

There are basically two sources that are still causing havoc with the funding markets, and the hope on the part of many VCs to see a calm, rational, deceleration of investing: The role of corporates and international money.

Typically corporate investing dries up in a time on constriction. But either we’ve seen a systemic change in the role of corporate VC (which I predicted a year ago) or we just aren’t in a downturn, because corporate investing only took up a higher percentage of deals done this past quarter. Globally, it’s at 27%. And in Asia, corporates exert an uncomfortable amount of control in the venture markets, doing some 30% of the deal volume. The role of Alibaba, Tencent, and Baidu in corporate venture capital has far less of a track record than corporate VCs in the US. It’s anyone’s guess how committed they are to the sector. 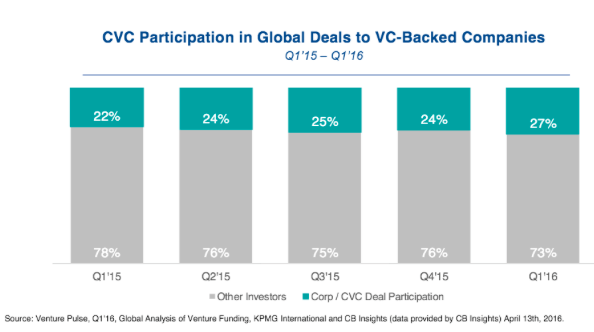 Meanwhile, KPMG expects that even more Asian companies will jump into the corporate VC game. It’s good news for Asian startups in the short term-- particularly given they experienced the sharpest drop in funding this past quarter. But a reversal in the trend would decimate them.

A reliance on corporates is far more of a risk than a reliance on VCs, because corporations don’t exist solely to fund startups, the way VCs do. VCs have the luxury of “taking a pause” for a quarter, as infuriating to startups as that may seem. But ultimately they are given money with the sole purpose of investing it.

The other wild trend spoiling any downturn predictions has been the rise of International cash. We’ve seen this anecdotally, but check out this chart. In the first quarter, just as many international investors put cash into US companies as California-based investors: 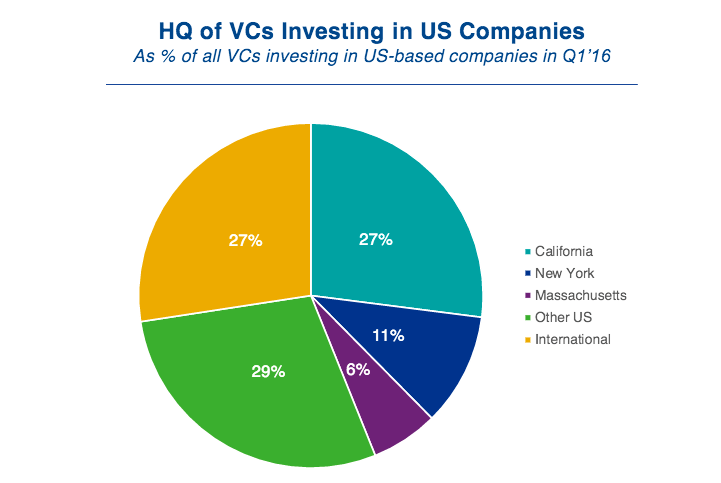 This is a huge, huge shift from when I first started covering the industry and three out of every four venture dollars came from Silicon Valley, and Massachusetts was a solid number two. And it explains a lot of what doesn’t make sense.

The strangest deal of the quarter was WeWork’s $430 million round at a $16 billion valuation, some 60% higher than its price last summer. The Journal didn’t get it, the traditional property industry certainly doesn’t get it, and we don’t get it either. The only capital confirmed to be participating? Chinese money. Again and again, when a deal doesn’t quite make sense, the source is frequently international capital. Even Uber’s latest round came from a sketchy Russian oligarch.

This isn’t to denigrate foreign capital. There is a lot of incredibly sharp foreign money that’s highly strategic for Valley companies trying to navigate global markets. Imagine Lyft’s tie up with Didi Kuaidi and its investors, for instance. But like anywhere else, there’s a lot of dumb money that just wants to get in the game too. And because the US press and entrepreneurs are typically navel-gazing, they don’t tend to know the difference.

LIke I said, the first quarter of 2016 was more about a shift in power than it was a downturn. With hedge funds and mutual funds pulling back, VCs are trying to control the game more than they’ve been able to. And the big wildcards are what corporates and international cash will do next.