Don’t believe the spin: So far there is absolutely no shakeout in on demand companies

Anyone saying otherwise is misinformed or spinning.
By Sarah Lacy
Apr 20, 2016 · 5 minutes

We need to set the record straight on something: There is absolutely no shakeout happening in the on-demand startup world right now.

I was one of the first to write the now popular analysis that Uber dominates the on demand economy in terms of cash, users, and valuation, and that the bulk of what makes ridesharing a great category aren’t attributes shared by categories like, say, home cleaning. I’ve been on the record saying I don’t think any of the meal kit companies will make it to an IPO, but if one does, it’ll be Blue Apron-- by far the best executed and best capitalized. There’s no reason dozens more keep getting funded. There’s no differentiation and a limited market.

So I’m not saying anything silly like these companies are “underfunded” or the prices are justified. I’m simply saying everyone telling you they can’t raise money, because we are in some on demand shakeout is either lying, spinning, or just wrong.

While some companies like Doordash have taken longer to get funded, and others like Instacart have reported they’ve pulled back on growth to focus on profitability, there is no evidence that there’s anything remotely close to a shakeout going on.

For one thing, we’d see more casualties. Nearly ten thousand on demand companies have been funded in the last few years. Most of the press can name less than ten that have gone under. Most articles talking about this “shakeout” name the exact same ones: Sidecar, Zirtual, Spoon Rocket, Homejoy and as of last week, Shuddle.

Forget for a moment how short that list is, and how frequently the same handful of names are listed as “evidence” of something broader. Even this small list of failures spans years. Homejoy and Zirtual went under last year, when we saw the peak of on demand funding. And the writing was on the wall for Sidecar for a while. Mostly these were simply cases of poor management, too vague of a market, or stronger competitors. As I wrote yesterday about Shuddle, its management tried to blame its failure a broader shakeout of on demand apps, even as their smaller competitor HopSkipDrive raised $10 million in the exact same quarter Shuddle failed to.

Consider the argument in this Salon story that got a ton of play recently, “Good riddance, gig economy.” It ignores all data showing the sector is still growing in jobs, valuations, users, and overall funding quarter after quarter. Instead, its “evidence” is mostly wishful thinking and the death of SpoonRocket.

Oh, wait, Salon also cites TaskRabbit. (Which hasn’t gone under.) Then it cites several little known players. There’s Cherry (which never made it past Series A to begin with), Prim (which had only one undisclosed small investment), SnapGoods (which Crunchbase has no funding info on), Rewinery (which similarly never seems to have raised capital), and everyone’s favorite, example, HomeJoy. The article also cites Zaarly and Exec, which like several companies in this list, started to decline well before the made up slow down of 2016 began. Zaarly last raised money in 2011, and Exec was closed in 2014.

Memo to writers: If you are going to list failed startups as evidence a sector has suddenly been decimated, pick ones that got funded by VCs to begin with or ones that went under in the last year. The argument simply doesn’t hold.

The strangest part of the Salon argument may be that the writer acknowledges that three out of every four startups fail even in normal times…. And yet, the entire article cites no more than ten on demand companies over more than five years that have gone under out of nearly ten thousand funded. Every entrepreneur should hope their sector has such “terrible” odds.

The remarkable thing isn’t that these ten or so companies failed. It’s that the writer couldn’t find more examples out of ten thousand companies funded.

I asked CB Insights if they had a list. They said they’re in the process of compiling one, and pointed me to a Tweet the other day listing about a dozen closures in the food space. I hadn’t heard of many of them. In all likelihood, there are scores more that never got more funding and have quietly closed as well. Maybe 100. Maybe 1,000. But nothing that would indicate any sort of mass carnage that would signal the “death” of a category and almost no high-profile ones.

Forget a shakeout. In a normal market, there would be a far higher death rate among these companies. Typically only 30% of companies make it from seed to Series A. We certainly have not seen 70% of on demand companies closed a year after the category’s funding hit its peak. Will we this year? Maybe. But there’s not only no sign of that now, there’s no sign of new capital going into the category abating.

Very smart people in the tech world say as fact that funding for on demand companies is slowing. And certainly the number of closed deals has gone down quarter-on-quarter industry wide for most of the last year. There’s some anecdotal evidence that rounds are taking longer to close. But the actual capital going into startups isn’t slowing on a macro level or for this category at all.

Look at this graph via Pitchbook: 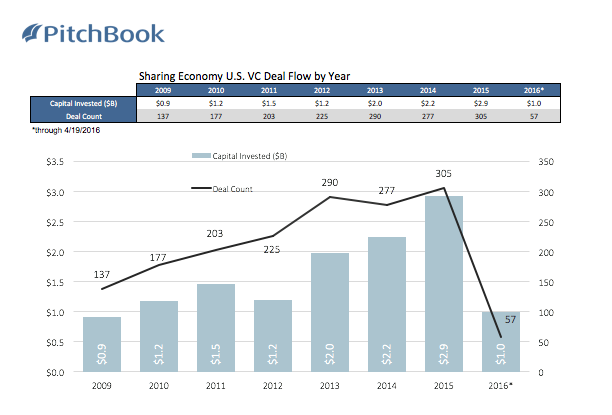 In the first quarter of 2016-- the year Shuddle’s CEO and Salon’s writers would have you believe there’s been an “apocalypse” in on demand funding-- more than $1 billion of new capital went into the category. In just one quarter, that’s already one-third of the capital committed to on demand companies last year. And that’s saying something as last year was the biggest year for on demand funding on record. In just one quarter, 2016 already has matched nearly half of the money that went into on demand apps in 2013 and 2014.

Numbers don’t lie. So far in 2016, there is no slowdown in funding, and we’ve haven’t seen anything like even a normal rate of company deaths.

LIke a lot of people, I believe it’ll happen. But it isn’t yet.