Why do startups keep trusting large tech companies to look out for them?

The biggest threat to venture capital funding that no one seems to be talking about.
By Sarah Lacy
Apr 26, 2016 · 2 minutes

(Our take on what the memo was really telegraphing is here…)

One -- perhaps the only?-- category he didn’t get into were corporate investors. I’ve written a few times about how dependent the global and domestic venture markets are on corporate investors-- historically total flakes with misaligned incentives. I’m stunned that no one else sees this as one of the most uncertain forces in the future of fundraising.

There are two schools of thought when it comes to corporate VC right now. The first is that companies like Alphabet and perhaps the Chinese powerhouses like Alibaba and Baidu and Tencent have such whopping amounts of cash that they’ve fundamentally changed the game. The second is that every time there’s a hot market, corporate venture capital surges. Then it goes away. And to bolster the latter point: We’ve seen some absurd examples of it like Jet Blue, Sesame Street, and even other startups creating “funds” out of their own unsustainably venture capital coffers to fund startups. Literally, there were jokes about corporate VCs on NPR yesterday. When NPR is riffing on you… that’s a bad sign.

It’s 25%-30% of funding volume depending on where you live in the world. We freak out about small dips in funding volume. The largest and most reliable force in corporate investing-- Intel Capital-- is rumored to be selling off a large chunk of its portfolio. And yet the industry was still voting for Intel Capital as a “dream” investor in CB Insight’s Series A bracket.

Entrepreneurs who should be the most concerned are those in categories that aren’t consistently funded by VCs. Should Comcast Ventures sour on content companies: Watch the fuck out, media folk. Should Intel and Qualcomm Ventures both go away or slow down? Internet of Things and hardware is fuuuuuckkkeeed.

Consider this graph from yesterday’s CB Insight’s newsletter a cautionary tale. Here’s what happened when corporates changed their minds about ed tech: 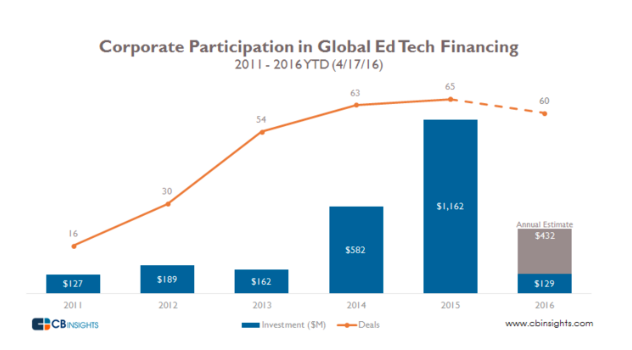 What’s potentially worse for ed tech than the drop in funding? Corporates are doing a larger percentage of the deals in 2016 than in years past. So a category that was already uncomfortably reliable on corporates is even more so now.

I’m not saying don’t take money from corporates. At some point-- especially in unsexy categories-- money is money. Just don’t expect it to always be there or always have your back.