Amazon is one volatile puppy

Amazon had a strong first quarter, but probably not for the reasons you've been reading about in breathless tweets and giddy commentary....
By Kevin Kelleher
Apr 29, 2016 · 6 minutes

Amazon had a strong first quarter, but probably not for the reasons you've been reading about in breathless tweets and giddy commentary.

To recap, Amazon blew away analyst estimates with revenue up 28 percent to $29 billion (against Wall Street expectations of $28 billion) and earnings per share of $1.07 (versus the consensus of 58 cents). And the stock rallied 13 percent on the news in after hours trading.

So all is good in the land of tech, right? First Facebook came in with as impressive a quarter as any tech company could have hoped for, driving its stock up 7 percent Thursday. Now Amazon is up an even more impressive 13 percent in afterhours trading. And in two short days, the dark clouds hanging over the tech sector after Intel, Netflix, Alphabet and Microsoft posted earnings are maybe, just maybe, gone.

Maybe not. Because while I'm as susceptible as any tech journalist to the “Earnings Up + Stock Up = Life Is Good” formula of thinking, there are exceptions to this rule. And Amazon is a prime exemption. To be clear, I don't think Amazon had a bad quarter, but I do think it was a more complicated quarter than what many of the headlines are indicating right now, as I'll try to explain.

First of all, Amazon blowing away estimates is like someone blowing some lint off their shoulder – the poor piece of lint never saw the gust of breath coming. This isn't to knock tech analysts, who despite the compromised calls that plagued the dot-com era 15 years ago, have since worked to regain credibility in a business that is frankly more art than science. Rather, it's to show how hard it is to predict what Amazon, quarter by quarter, is doing. 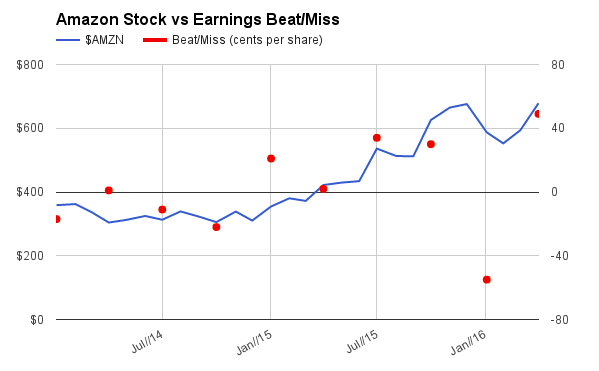 At times in fact, the stock seems to move less on actual growth in revenue and profit than on how much it exceeded or missed Wall Street expectations. Amazon and its investors are in this weird dance of expectations that depends as much on what analysts are predicting as on any actual news from the company.

Amazon shares this quirk with Netflix. Both companies have been investing money that could be near-term profits into longer-term growth. Unlike Google, Microsoft or Facebook, they have shown thin profit margins, when they have profits to report at all. Naturally, this practice of foregoing profits for future growth spurs both speculation and volatility in their stock prices.

This means Amazon isn't trying to manage its capital spending to please investors quarter by quarter, unlike many large-cap blue chips. Amazon invests from an offensive playbook rather than a defensive playbook. And that makes its profits especially lumpy from quarter to quarter. But longer term, provided Jeff Bezos knows what he's doing, it keeps revenue moving up and to the right: If Amazon senses a market where capital investments will lead to more revenue, it's making those investments.

That plan worked out this quarter. Amazon Web Services, for example, saw revenue grow 64 percent to $2.6 billion. While that segment made up only 9 percent of Amazon total revenue, its $604 million operating profit made up 56 percent of Amazon's total. And cloud services are not only expanding, they are becoming more profitable as they grow. AWS profit was equal to 24 percent of the segment's revenue last quarter, up from 12 percent a year ago.

Every quarter, AWS has given Amazon a growing buffer to meet its long-term plan of investing in its retail business. In retail, Amazon also had some encouraging news. International revenue, which has long lagged North American revenue in terms of growth, grew by 26 percent excluding currency exchange rates, up from 14 percent a year ago. Amazon said in a call discussing earnings that Prime adoption is increasing in Europe and Japan as it rolls out more features.

Which makes sense, if you take a step back, Amazon's strategy has been steady over time: Invest where it sees growth, dial back on things like the Fire phone that aren't working, and wait for the seeds to sprout. And yes, the harvest may be uneven quarter to quarter. “We're not trying to optimize for any particular number in any given quarter,” an Amazon executive said on the conference call. “We're juggling the investment, where we feel like we have long-term opportunity.”

This is a pro-forma warning the company issues every quarter, and one that almost always gets lost in the shuffle of beats, misses and subsequent stock swings. This quarter, Amazon laid out a long list of things it would be investing heavily in during 2016. All of them make sense, and taken as a whole they make you wonder about how lumpy profit will be in coming quarters.

On the earnings call, Amazon said it will bump up capital spending to AWS, to help expand it into 12 new regions around the world. And to devices like the $180 Echo and the $290 Kindle Oasis, both of which help foster the addictions of Prime lovers. Not to mention, truck purchases and Boeing 767 leases to smooth product shipments. And expansion into India, including a “studio on wheels” that helps sellers set up to market goods on Amazon's site.

And then there's video content. Amazon doesn't just resemble Netflix in its willingness to invest profits in future growth. It's becoming Netflix in its aggressive content spend. Amazon CFO Brian Olsavsky said the company would keep investing in Prime benefits primarily through video content. Asked what happens if Prime membership tapers off as the US market grows saturated, Olsavsky reiterated, “I don't think you see that [investment] dissipating.”

Given all these capital commitments, Amazon is laying out the groundwork it knows loyal subcribers have come to expect as well as the growth investors have come to demand. But it's also adding the dreaded “lumpiness” of the next few quarters, at least.

With some companies, Facebook being a good example, long-term growth is coming steadily. With a company like Amazon, evidence of progress is more likely to come in fits and starts. Which makes a one-quarter blip less of a thing to get worked up about. Longer-term, though, Amazon's promise looks just fine.