That's four less than it took the videotape in The Ring to kill people.
By Paul Bradley Carr
May 2, 2016 · 1 minute

When Arianna Huffington announced last week that she was joining the board of Uber, the nation's journalists went predictably batshit.

Such a brazen conflict of interest for the editor in chief of one of the world's highest trafficked news sites to take a job helping run the planet's nastiest tech company.

But don't worry dahling, Arianna assured her twitchy colleagues, I'm adding a mandatory disclosure to every Huffpost story mentioning Uber. Readers will be reminded of my second job every time we publish a story about Uber. No sneaky pro-Uber drum beat for us!

On Sunday, the front page of the Huffpost declared "Uber Drivers In New York Form Labor Association" -- the most promenent Uber-related headline on the site since Arianna announced her new job. And yet, readers looking  for the much-ballyhoo'd disclosure would have found... 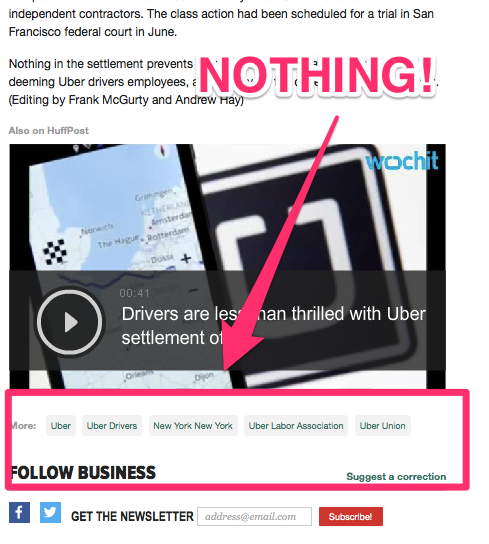 Y'see, despite the fact it appeared on the front page of Huffpost.com and was headed with Huffpost branding, the story wasn't actually written by Huffpost writers. It was written by Reuters and syndicated to Huffington's site. As such, it was apparently not covered by Arianna's disclosure pledge.

You probably don't need me to explain the problem here. On any given day, the front page of Huffpost cross-posts any number of articles from other sites. Those stories are just as visible as articles by the site's own writers, and just as influential. And yet, thanks to this loophole, Huffington could cross-publish a thousand pro-Uber stories on her homepage without a single disclosure.