Nick Bilton has got to be kidding you

Vanity Fair's new tech columnist is angry at all the reporters who gave Theranos an easy ride. Except one.
By Paul Bradley Carr
May 3, 2016 · 6 minutes

Nick Bilton has landed himself a gig as “special correspondent” for Vanity Fair, and by God doesn’t he want you to know it.

Not satisfied with lining up press interviews to talk about his new job -- press interviews! -- now Bilton has decided to neg his former colleagues in the tech press to make absolutely sure they're paying attention, and to show his bosses that he can deliver the young, hip Valley eyeballs he promised at his job interview.

What other explanation could there be for his latest column, eastcoastsplaining that the Theranos scandal was all the fault of the Silicon Valley tech press?

If you peel back all of the layers of this tale, at the center you will find one of the more insidious culprits: the Silicon Valley tech press. They embraced Holmes and her start-up with a surprising paucity of questions about the technology she had supposedly developed. They praised her as “the next Steve Jobs,” over and over (the black turtleneck didn’t hurt), until it was no longer a question, but seemingly a fact. At TechCrunch Disrupt, blogger Jon Shieber had his blood drawn onstage as he interviewed her. There were no tough questions about whether Theranos’s technology actually worked; just praise. When it seemed that the tech press had vetted Holmes, she subsequently went mainstream. She got her New Yorker profile, and her face appeared on the cover of T: The New York Times Style Magazine, among others.

Attentive readers will have noticed the (first) glaring flaw in Mr Bilton’s blaming of the “tech press in Silicon Valley” for the rise of Theranos.

Of the publications he cites by name -- the New Yorker, T: The New York Times Style Magazine, TechCrunch -- only one is actually a tech publication based in Silicon Valley.  That’s a curious thing for Bilton to be confused about given that the Times is his own former employer.

And that confusion turns to unmitigated nonsense when Bilton narrows the focus of his criticism further, to publications that rely on access to tech celebs for conferences.

So why did Holmes and Theranos get such a break? Was she an anomaly who somehow pulled one over on the tech press in Silicon Valley? Not even close.

The system here has been molded to effectively prevent reporters from asking tough questions. It’s a game of access, and if you don’t play it carefully, you may pay sorely... Writers who ask probing questions may not get to interview the C.E.O. next time he or she is doing the rounds. If you comply with these rules, you’re rewarded with page views and praise in the tech blogosphere. And then there’s the fact that many of these tech outlets rely so heavily on tech conferences. “If you look at most tech publications, they have major conferences as their revenue,” Jason Calacanis, the blogger and founder of Weblogs, told me. “If you hit too hard, you lose keynotes, ticket buyers, and support in the tech space.”

Helpfully for Bilton, that narrowing of focus rules out Buzzfeed, The Verge and Wired, all of which do great investigative tech reporting of the type he claims doesn’t exist. Arguably it could still include Pando -- we do have a conference after all -- but it’s not often we’re accused of going too easy on tech companies. Certainly, our scepticism over medical devices is not in question.

Really, then, the only two publications Bilton could possibly be referring to are TechCrunch and Re/Code. Both failed to criticise Theranos and both rely on access journalism to ensure a steady supply of conference speakers. They are the ones that Vanity Fair’s special correspondent blames for allowing Theranos to exist!

And yet, notice only one of those publications gets name checked: TechCrunch. Why does Re/Code get a pass? Perhaps it has something to do with the fact that Kara Swisher, when she’s not busy editing Re/Code, is another special correspondent for... Vanity Fair.  In fact, it was Swisher who famously wrote one of the most grotesque apologias for Uber’s Travis Kalanick, just days before it was revealed that Uber had a secret plan to smear critical journalists including Pando’s Sarah Lacy. Swisher didn’t write it for "Silicon Valley tech publication" Re/Code, mind you. She wrote it for "employer of Nick Bilton," Vanity Fair.

I should make clear that not every Vanity Fair writer is guilty of that kind of fluffing and gushing. For example, it was Vanity Fair that published Nancy Jo Sales incredible takedown of Sean Rad and Tinder, which prompted Rad to threaten an Uber-style smear campaign against Sales. (Ahem, you can hear Sales talk about this and more at our Pandoland conference in June. Also appearing: Sam Yagan, Vice Chairman of Tinder’s parent company, Match Group -- a company we have hit plenty hard.)

Now compare Sales’ excellent reporting with these puff pieces written about the same founder and same company by Vanity Fair’s Kara Swisher and Nick Bilton and you start to wonder if the magazine has deliberately hired Swisher and Bilton to balance out its existing critical journalim and curry favor with the west coast billionaires. Y’know, the kind of billionaires who would love to believe that it’s the nasty old tech press that’s to blame for their own bad behavior.

But, in fairness, Bilton’s complaints aren’t about Uber or Tinder, they’re about Theranos.

Buried deep in Mr Bilton’s column is an admission that, yes, Vanity Fair has written about Theranos too.  In fact, founder Elizabeth Holmes was included in the magazine’s “New Establishment” list of “ the most important visionaries, investors, and cultural leaders in 'the Year of the Unicorn.'".

Here, quoted in its entirety, is what the fierce tech journalists of Vanity Fair had to say about the Theranos founder...

In a market overrun with pizza-delivery apps, Holmes has become something of a heroine for starting Theranos, which offers cheaper and less invasive blood testing. Last year, she became the world’s youngest self-made female billionaire when Theranos raised money at a $9 billion valuation. This summer, a company test to diagnose herpes won F.D.A. approval.

What was it Bilton said about “Silicon Valley” reporters?

There were no tough questions about whether Theranos’ technology actually worked; just praise.

And “there’s the fact that many of these tech outlets rely so heavily on tech conferences.”

Who's this at the top of the speaker page of Vanity Fair's New Establishment conference…? 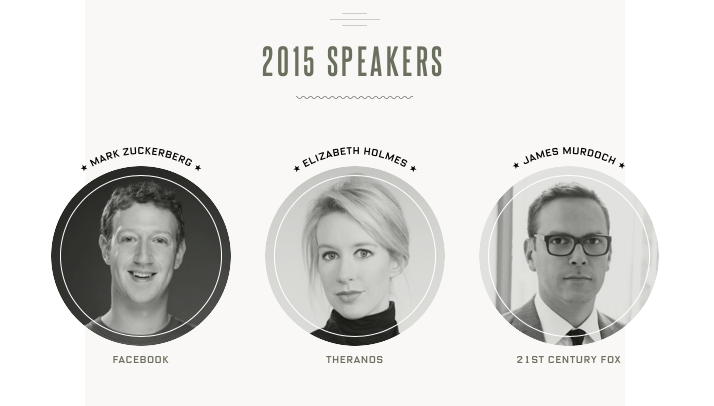 Yep, if Re/Code and TechCrunch are to blame for giving Theranos an easy ride then they pale next to the sedan chair provided by Vanity Fair.

Still, Bilton can’t be held responsible for every article that appears in Vanity Fair, only those which display his own byline. The responsibility for the grotesque hero worship of Theranos in Vanity Fair's "New Establishment" feature lies firmly with the authors of that piece. Those authors being Max Chafkin, Sarah Ellison, Peter Kafka, Kevin Roose, Bee Shapiro and, right there at the top... 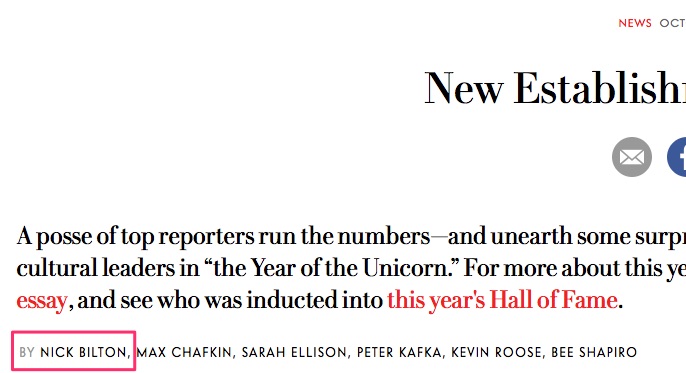