Will the New Republic's devastating profile of Narendra Modi give his tech CEO fans pause?

For over a year, Pando has been covering Indian Prime Minister Narendra Modi and his growing mutual love-in with Silicon Valley tech leaders.

At that same meeting Zuckerberg gushed “I am personally impressed by the way PM Modi has used social media to connect with [the] people of India, be it women’s issues or to spread messages of peace.” Modi thanked Zuck by yanking him aside to ensure photographers captured Modi’s best side.

Later Modi met with executives from Google, Microsoft, Tesla and… of course… 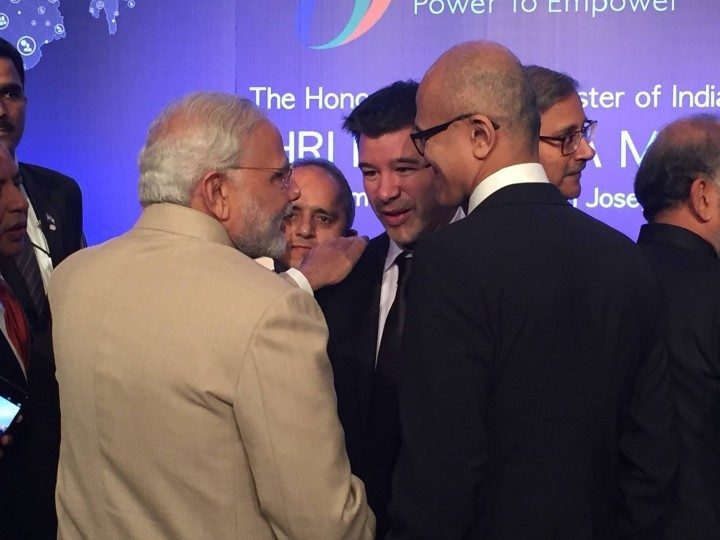 Still, Zuckerberg, Kalanick and co seem positively standoffish when compared to the friendship between eBay founder Pierre Omidyar and Modi. As we’ve previously reported, Omidyar and high ranking Omidyar Network executives actively helped Modi get elected and at least one ON staffer has join Modi’s government.

Given that outpouring of love, we weren’t particularly surprised when our coverage of Modi was met with howls of protest from India and the Valley. After all, while Modi’s supporters were likening him to Gandhi, Pando’s Yasha Levine was reminding readers that the Prime Minister previously oversaw pogroms and all manner of grotesque human rights abuses against his own people. So much so that Modi was previously barred from entering the US by the State Department. While tech titans were cosying up to Modi in exchange for most favored access to India’s billions of tech-hungry citizens, Mark Ames was exposing the Prime Minister’s real relationship with Silicon Valley leaders.

Now, finally -- finally -- other US publications have started to shatter the Modi myth. Yesterday the New Republic published a devastating profile of Modi, written by Siddhartha Deb. In it, Modi is shown less as India’s Gandhi 2.0 and more as their own homegrown Donald Trump:

Modi’s Gandhi, however, had nothing to do with anticolonial politics, mysticism, or nonviolence. Those had been left behind with the old India, as demonstrated by some of Modi’s supporters outside the venue. Gathered in large numbers, they heckled and jeered at the Indian television anchor Rajdeep Sardesai for being part of what they saw as the liberal wing of the Indian media, which is ill-disposed toward Modi. To Sardesai’s attempts to ask them questions, they responded with shouts of “Modi, Modi, Modi.” When he retorted, “Did Mr. Modi tell you to behave badly? Did America tell you to behave badly?” a brawl ensued, some of the men chanting, “Vande Mataram,” or “Praise Mother India,” while others shouted, “Motherfucker.”

This episode could be seen as an aberration, but the combination of adulation and violence, sanctimoniousness and abuse, is never far from Modi and those who support him. It is, in fact, the essence of his appeal. He is a representative Indian not merely because he signifies potential, outsider status, and an Indian form of DIY upward mobility, but also because he embodies violent sectarian and authoritarian tendencies: so much a modern man belonging to the new century that he has dispensed with the pacifism associated with Gandhi.

The profile echoes our own reporting on the pogroms, and even confirms the visa ban:

In the aftermath of the massacres, Modi demonstrated not a shred of remorse or regret. In fact, he decided early on to turn questions about the massacres and his role in them into an attack on Gujarat, and on India, especially when the Bush administration decided, in 2005, to deny Modi a diplomatic visa and revoked his tourist/business visa for the “particularly severe violations of religious freedom” that had taken place under him.

The timing of the profile is interesting. It comes just weeks after Facebook “co-founder” Chris Hughes announced he had sold the magazine to Tin House publisher Win McCormack. I wrote last month about Hughes’ disastrous leadership of the once-venerable publication and expressed some hope that McCormack would see it return to its roots.

The profile gives me hope. Certainly it’s unimaginable that the publication under Hughes would ever have published such a damning indictment of Mark Zuckerberg’s favorite world leader.

It’ll be interesting to see what happens next. Specifically whether Silicon Valley’s tech titans change their position on Modi, or whether they continue their policy of willful ignorance.

And yet, multiple sources close to First Look Media have told me that Omidyar requires his own employees to sign that exact same type of gagging order. When Pando asked Omidyar to confirm one way or the other, he didn’t respond. Interviewed by the Huffington Post about Omidyar, former employee Matt “fearless journalist” Tabbi said “I can’t, I can’t, I can’t talk about [Pierre Omidyar] unfortunately… No matter what my feelings toward First Look Media, I don’t think it’s appropriate to talk about my former employers.”

Shortly afterwards, Omidyar retweeted a MoveOn tweet demanding “the media needs to call @realdonaldtrump what he is, a dangerous, racist, bigot.” A description which could just as easily apply to Modi.

Unlike Trump, Modi’s victims are real rather than hypothetical but, also unlike Trump, Modi offers the key to billions of potential new tech consumers. For that reason it’s safe to assume tech leaders will continue their hypocritical and indefensible praise of Gandhi 2.0.