Sure Pinterest struggles globally. But it’s big in... Idaho?

A state-by-state analysis shows a worse picture for Pinterest than I painted a few weeks ago.
By Sarah Lacy
May 10, 2016 · 3 minutes

Last month, I argued that decacorn Pinterest which recently did a redesign so “ambitious” that it hoped no users would actually notice the changes was not the “quiet overachiever” that Wired argued for in a glowing profile on the redesign.

Rather, it was almost like a still private Twitter: A social network that burst out early on with a distinct and enviable demographic that simply failed to resonate more broadly, domestically or globally. And unfortunately, both are also valued just north of $10 billion based on the idea that it could monetize better, because of the intention to purchase in the case of Pinterest and the context of real time in the case of Twitter.

Guess what? We know that absolutely worked in the case of Twitter. Until this last quarter, analysts worried it was monetizing too well, and that without user growth it risked topping out. Put another way: At some point, you still need to grow. What else ya got, Pinterest bulls?

Of course Pinterest’s demographic is always said to be America’s heartland. “Real America,” you Silicon Valley bro-snobs. I’ve raised doubts about just how much Pinterest does resonate among 40-year old women, being as I am one and I totally don’t get it. But let’s look beyond anecdotal.

Yesterday, Similar Web published a map showing the second most popular social media properties by state. Why do we care about second place? Because Facebook is so utterly dominant with nearly 80% of the social media traffic share in the US, “Who is in second?” is the only conversation left to have about the entire space. And depending on you how define social network, there are investors holding more than $40 billion in combined shares of LinkedIn, Twitter, Pinterest, and other social networks who may find the question relevant. 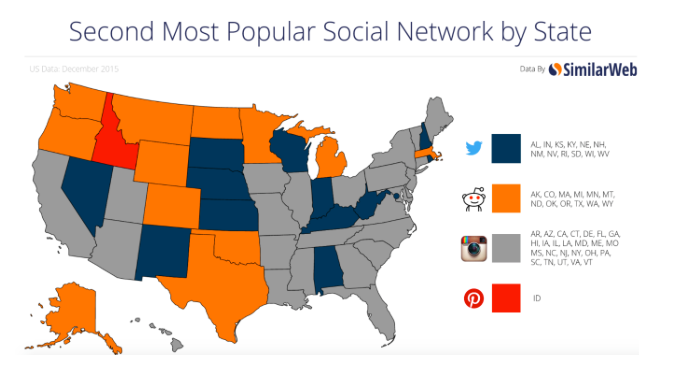 The first takeaway was that Facebook basically wins twice. A full half of the United States, both coasts, and four of the five most populous states are dominated first by Facebook and second by Instagram. Perhaps I’ve been watching too much CNN, but if you could interactively change the color and give those states to Twitter, you see just how pivotal losing Instagram was for the company. (Admittedly, Instagram would not have grown nearly so much without being part of Facebook, but without the Facebook-Instagram tie up, those states would have been “up for grabs.” Those CNN electoral maps are just as speculative and fictional.)

The second takeaway is how “dominant” Reddit is. It is the second largest social network in as many states as Twitter is. Both are havens for abuse and trolling and some of the ugliest parts of the Internet, or as apologists say, defenders of unfettered free speech. That hurts the growth and monetization of each. While Twitter struggles to maintain a ten billion dollar valuation, Reddit may be the most glaring example of when eyeball don’t translate into a large business.

But the biggest surprise may be the lack of “Pinterest red” in the Mid-West, the area we’re always lead to believe is Pinterest country. Pinterest is the second largest social network in exactly one state: Idaho. That fares significantly worse than Twitter. And I thought calling Pinterest a still-private Twitter was a pretty devastating line.

The map doesn’t show everything. Twitter for instance seems to fare far worse than Instagram in states, but in overall traffic ranks second to Facebook. There’s a little Twitter everywhere, just not in as great concentrations in certain states.

Going back to my CNN analogy, you have to wonder if a Pinterest-Facebook tie up could have been a smart move several years ago. Not so much for Facebook-- which is doing just fine-- but for Pinterest. Facebook is afterall an inherently image-driven medium, and Pinterest is very visual, and Facebook is also very female-dominated. And Facebook has always struggled around the idea of “social commerce.” Perhaps Pintrest needed someone like Facebook to help push it mainstream. Because a redesign no one noticed surely isn’t doing the trick.

Given the misogyny and abuse that lurks in both Twitter and Reddit, it would be interesting to actually compare this to the electoral map come November.