While even I can’t be too cynical about Benioff’s stands for the LGBT community and equal pay for women, I noted that he tends to pick causes that a bandwagon forms around and tends to pick causes that are easy from the perch of progressive San Francisco. Stands that win him points as a leader, but won’t cost him too much among the people he surrounds himself with. Stands that aren’t controversial in his world. For instance: You don’t become unpopular in San Francisco arguing for greater LGBT inclusion. Taking any remote sort of stand or even asking a hard question to Uber’s Travis Kalanick however… well, no sense rocking the boat.

But, yesterday, Benioff did something genuinely surprising. He took a stand that few tech leaders in San Francisco have and one I doubt very many will (publicly) echo: He called out San Francisco’s tech-friendly Mayor Ed Lee.

Sharing a picture of a San Francisco Chronicle story trumpeting the “great” news that George Lucas may be reconsidering the Mayor’s bid for its museum, Benioff wrote:

Im getting tired of @SuperBowl sell outs of our city without regard to our public schools, hospitals, & homeless. pic.twitter.com/wp3Ue7xXo6

SF @sfgov & @mayoredlee should only support Lucas Museum if GL does something for SF Schools, Hospitals, & Homeless. pic.twitter.com/XLcsn7WKY6

And late last night he was at it again:

While the Tweet got some attention in local politics press, it was little picked up by the tech blogs (obviously.) That’s a shame because Benioff’s comments represent an astounding breaking of ranks over a project that Ron Conway, and other tech leaders, had helped negotiate and push for. The interesting thing to watch will be if other tech founders follow suit.

Benioff is the master of orchestrating a bandwagon for maximum visibility. It’s worth noting that this wasn’t just an off the cuff remark. He’s pinned the original Tweet to the top of his timeline for more than 24 hours. He could have easily picked up a phone to Ed Lee to complain-- and maybe he has. But he wanted to make a public stand.

Up until now there’s been an uneasy coalition between the tech world and the Mayor’s office. The Mayor has been the first “pro-tech industry” leader, which isn’t necessarily a bad thing. After all, technology provides a lot of jobs and development for the city, for all the gripes about housing prices and inequality. Economic development is a core part of civic leadership.

But the other half of that bargain is the tech world feeling pressure-- both stated and not stated-- to blindly support Lee and his moves.

I’ve spoken to major CEOs of publicly traded tech companies in San Francisco who aren’t hugely impressed by Ed Lee, but feel like they could never criticize him publicly for fear of retaliation, or should we say, Ron-taliation.

I would have tossed Benioff in this camp before Monday. We had this exchange over Twitter a few months ago:

San Francisco is fortunate to have world class leadership with its @mayoredlee. Thank you Ed for all you are doing for our city.

Here’s how I responded and the public dialog on it: 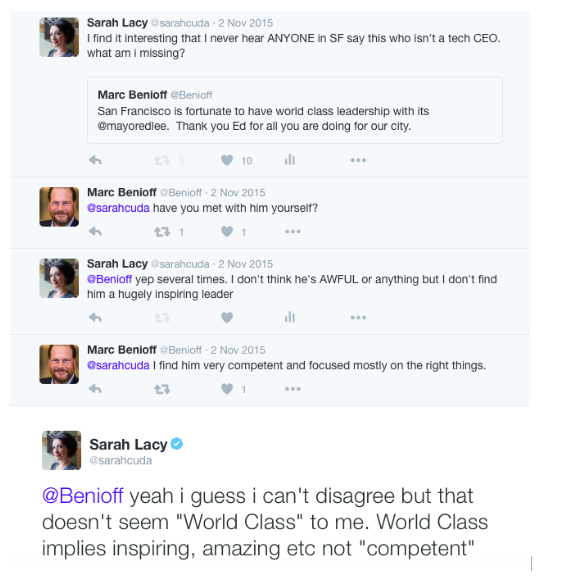 I guess one of those “right things” was not the Super Bowl-- an event a good number of tech CEOs enjoyed, but that many in the city found a horrible deal negotiated by…. Well, we don’t actually know who.

Joe Eskanezi has reported on the lousy deal at length for San Francisco magazine. His latest story detailed just how bad the Super Bowl was for the city, and the contortions civic leader have gone through to make it look good. According to the latest from Eskanezi by the most generous of math we made about $1 million of the Super Bowl as a city. Great use of resources, but we got a party right?

Only as Eskanezi details, the report doesn’t entail a lot of hidden costs:

QAlso not included are the hundreds and hundreds of city employees were were allowed to “volunteer” to do Super Bowl-related work instead of their city jobs, on the city’s dime. And, also not included is the $500,000 in round-the-clock construction costs the Transbay Center racked up in order to speed up work prior to Super Bowl street closures. (Is the Transbay Joint Powers Authority a vestige of city government? No. Is a quarter of a billion dollars of city money slated to bail out its cost overruns? Yes. That makes it harder to argue its half-million-dollar Super Bowl hustle shouldn’t be added to the ledger.)

And, finally, the supposed surplus the city came away with isn’t spread evenly. Certain elements of the city, such as the airport, came out ahead. Muni, the Giving Tree of this greedy city, came out $2.5 million in the hole. Rydstrom notes that San Francisco’s mad economy has led to several million dollars of extra tax money for Muni in 2016. But, he acknowledges, it lost millions in the two weeks of Super Bowl celebrations, and won’t specifically be made whole.

Lastly, while Peyton Manning and the Denver Broncos did not require overtime to put away the Carolina Panthers, San Francisco police officers did require 50,158 hours of overtime to oversee the event. That comes out to more than $4 million in police OT pay alone—the lion's share of the city's expenditures.

I’m with Benioff. Better uses for our capital than a vanity game that’s rapidly becoming a distant memory.

I reached out to Eskanezi who covers city politics far more closely that I do to get his thoughts on Benioff breaking ranks with the mayor this time. He wrote back, “It is rare for someone of Benioff's standing to so publicly call bullshit on something the mayor and his cadre were holding so dear.”