There's no possible way this could be a bad thing for drivers.
By Paul Bradley Carr
May 18, 2016 · 4 minutes

It hasn’t been a great few weeks for Uber, what with Apple giving a $1bn to some of its major competitors, a humiliating defeat in Austin, and the lead plaintiff in its $100m class action settlement now appealing the payout.

So you (and we) might be forgiven for missing an announcement that the company snuck under the news radar a few weeks ago. I missed it too, until a reader sent me a link to a Twitter discussion yesterday.

Or at least that’s what Uber would have you believe. Certainly they would prefer you not describe “Advance Pay” for what it really is.

As if Uber weren’t already bad enough, and as if its car loans offer did already turn enough drivers into indentured servants, Uber is getting into the payday loans business.  And worse, they're doing it while posing as a financial savior:

Research by the Federal Reserve has found that 47% of people in the U.S. would struggle to handle an unexpected bill costing $400 — with a third saying that they would be forced to borrow to pay. Oftentimes, people who face cash shortfalls have turned to payday loans at very high interest rates, or credit card debt.

Uber offers flexible work opportunities, where people can drive as much or as little as they want to meet their own goals and needs.

To understand why Advance Pay is so dangerous you only have to glance at the terms and conditions of Clearbanc, the company actually powering the loan service.

In the Advance Pay pilot, Clearbanc will offer eligible new drivers a cash advance of up to $1,000 with no interest. Participating drivers will receive some of the funds up front, and the remainder after they take their first trip.

Drivers can repay Clearbanc directly at any time or will have some of their weekly earnings with Uber automatically go to Clearbanc until their cash advance is paid back in full. In this pilot, each automatic payment will be capped so that drivers never have more than 50% of their weekly earnings automatically deducted. Participating Driver-partners can drive as often or as little as they like, just like any other driver-partner.

Instant Pay: The cost is $2 for each day that Clearbanc deposits funds into your account. You are only charged for days you work and you can cancel anytime by emailing: support@clearbanc.com Clearbanc's card provider partner may charge additional fees.

$2 a day for every day you are using the Clearbanc service to fast track your earnings. As several drivers have already pointed out, for drivers who want to advance each day’s earnings, that’s $60 a month. And in some markets $60 is more than a full day’s Uber earnings.

[Update: Clearbanc's Andrew D'Souza has emailed to clarify that there are in fact two different Uber lending products: Instant Pay and Advance Pay. Clearbanc is no longer accepting new customers for Instant Pay, and that service is now offered to Uber drivers by a separate company, GoBank. Instead, Clearbanc is offering Advance Pay, a service which advances drivers up to $1000 before they start driving for Uber. Asked if their receive (or pay) a commission from (or to) Uber for the partnership, D'Souza declined to comment.]

So let’s take Detroit, which is one of two places Uber has launched this program. Uber’s new reduced fare in Detroit is $0.30/mile. Just to pay back this $1000 loan, a driver would need to drive 3,333 miles in Uber rides over 15 weeks and literally make no ADDITIONAL money doing it!

3,333 miles. That’s the distance from New York to California.

And what if Uber decided to drop the fare by 30%. Sound familiar? That means it would take 4,327 miles just to pay back the loan.

The benefit here for Uber is simple: Drivers who receive $1000 advances are unlikely to pay them off in one go. Rather, they’re likely to use the service as a rolling cash advance, never quite paying off the balance. That keeps drivers locked in as they need to drive more hours to keep paying off the debt. Again, this is nothing new: It’s how payday loan companies keep you coming back for more.

Now. We live in a capitalist society and, as Uber keeps telling us, these aren’t employees, these are independent contractors who are old enough to make their own decisions. If someone wants to sign up for a payday loan provided by -- oh God -- Y Combinator backed Clearbanc then that’s their lookout.

Likewise, just because there are a growing number of negative reviews about Clearbanc on Facebook… well, every loan service has dissatisfied customers, right? 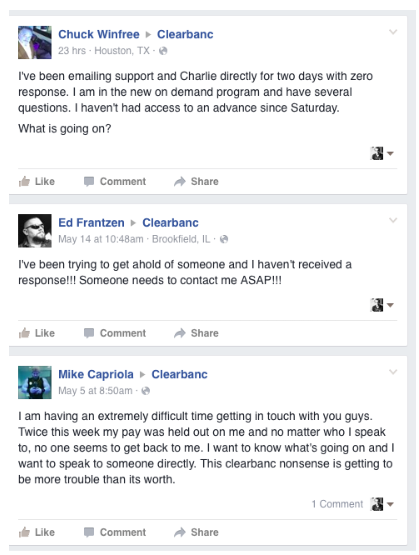 Still, wouldn’t it be nice if just one thing that Uber claims helps drivers didn’t actually turn out to totally screw them.