The big winner of the on demand world so far? Apparently, it’s Amazon and Craigslist

Watching the Tweets about a Pew Internet survey on the penetration of the sharing economy is like a Rorschach Test. Some trumpet the top line number that 72% of Americans have used some type of sharing or on demand service. 72%! No wonder all those valuations are so high!

Others have cited the fact that a scant 15% of people have ever used a ridesharing or ride hailing app. Twice as many had never heard of them. Only 3% use them on a daily or weekly basis. Only 11% have used home sharing services. 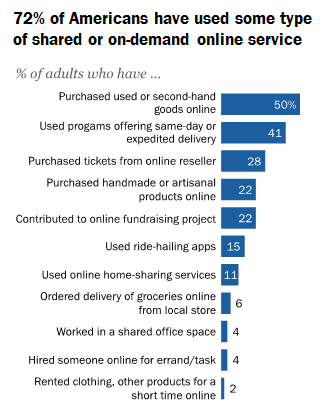 It’s a strange discrepancy given the vast majority of the valuations and venture dollars in the entire category of tens of thousands of on demand or sharing economy apps have gone to just four companies: Uber, Airbnb, Didi Chuxing, and Lyft.

The confusion is partially cleared up by the incredibly broad definition: 50% of that whopping headline number “purchased used or second-hand goods online.” That’s right. eBay and Craigslist are now in the “sharing economy” by that definition. The second largest category? 41% of people “used programs offering same-day or expedited delivery.” Or as I call it: Amazon Prime.

These are some of the oldest of ecommerce companies. No wonder usage was so widespread. Pew Internet has essentially polled people about using… the Internet.

Only one modern category was more widespread than ridesharing or home sharing and that was crowdfunding. Some 22% of people had contributed to online fundraising projects.

Other categories were even more nascent than ridesharing. Just 6% had ordered delivery of groceries online, just 4% had worked in shared office space, 4% had hired someone online for an errand or task, and just 2% had rented clothing or other products for a short period of time. I’d love to know how many people ordered meal kit services, but my guess is it’s not even a percentage.

Like the survey itself, you can look at this data one of two ways. The tiny percentages show how much room there is to grow-- in theory-- for companies like Uber, Lyft, Airbnb, Instacart, Thumbtack, and so many other unicorns. The downside is that growth is already baked into sky-high valuations. So if these services don’t become mainstream, there’s nowhere to go but down.

The perspective-- particularly when it comes to ridesharing-- is valuable to keep in mind. It explains why Lyft investors are still bullish on a company whose fate as a number two seems all but sealed. Because Lyft is still gaining market share, in its most mature markets most people have both Uber and Lyft on their phones, and because the US is so under penetrated. It explains (in part) the total shit fit over Austin requiring tougher safety regulations around Uber and Lyft: If companies are still this little penetrated in the broader economy, any turning tide in regulations that would hamper its growth could be devastating. It explains why Uber’s ascendancy to the rarified air of an Amazon, Google, or Facebook is so tenuous: It’s valued higher than any private Silicon Valley company ever has been reaching low double digits of the US population. And another major inflection point in its industry is looming: Self driving cars. And with self driving cars comes competition from Google, Apple, GM, and Tesla.

That’s like Facebook being worth $60 billion when just 10% of the US used its desktop social network, and mobile messaging was only a few years off. Desktop to mobile was a rapid and tough transition for Facebook that it was forced to spend tens of billions to survive. And its competition was mostly startups it could buy-- not the largest companies on the planet.

Uber will face a quicker transition, requiring more legislative uncertainty, with a harder technology problem, with a far smaller installed base and go up against far tougher competition.

And that’s the best positioned of the company from this era. Look again at the numbers: According to Pew one of the largest “on demand” companies is Amazon: Which is reportedly taking another step towards grocery delivery and domination with the roll out of private brands. Anyone in same day delivery of goods-- whether Instacart or Postmates-- can’t feel good looking at these numbers. If Amazon gets remotely serious about groceries, it has nearly 10x the installed base of customers who consider it to be “on demand.”

These apps are touted to be a way to help people make extra money and become their own bosses. But increasingly it’s just a way for half of the population to do the bidding of the other half-- with costs and earnings constantly being squeezed out of the equation. This survey doesn’t so much show disruption as it shows the growth of several premium services.