Revisionist history only works if no journalists are there to record the truth.
By Sarah Lacy
Jun 7, 2016 · 6 minutes

For the last ten years, I’ve tried to resist saying any variation of the following:

“We saw this last time around!”

I moved to the Bay area at the peak of the dot com bubble, and it was not then like it is now. The many differences have been described, over the past decade, in countless articles by me and others. Private money not public money. Bigger opportunities given the global growth of the Web and smartphone penetration, low cost of building a company -- yunno-- before it starts going apeshit with Saudi Princes and burn rate. Blah blah blah.

But finally I have a reason to say “We totally saw this last time around!”

What has finally caused a sense of deja vu? These Tweets from the New York Times Farhad Manjoo: 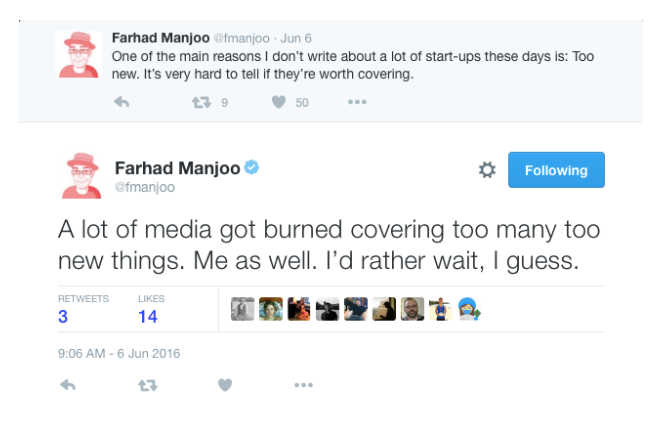 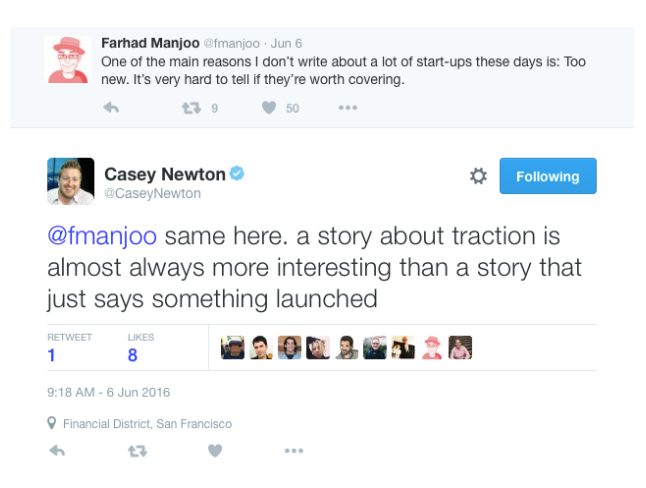 During the dot com bubble, startups and IPOs and venture capital were the only business stories that mattered. And a bunch of reporters-- and publications-- wound up with embarrassing clips when the bubble burst.

So the mainstream reporters and publications came up with a face-saving plan: They decided to stop covering startups until the industry press and analysts and the world’s traffic could all agree something was the next big thing. And then-- then! -- let the articles full of revisionist history, mythical founding stories and claims of overnight success fly.

You can understand why today’s mainstream reporters are having the same reaction. And it isn’t stories about a launch that’s causing it. It’s Theranos. It’s Zenefits. It’s articles like this by reporters who also didn’t call out any of this shit. The blame game, once again.

Where were the journalists! Not, why were these things funded at these prices and this behavior supported by professional VCs and boards?

Name one time someone harangued Casey Newton or Farhad Manjoo or any of the tech press for writing about a company launch that later resulted in a failed company? The truth is people typically don’t remember those stories. They get the odds are most companies launching will fail. What they remember are ones like these.

And here’s the thing: You are always more likely to be right if you wait until a company is profitable, has filed an S1, has already priced-- or whatever your metric is-- to publish analysis on whether its existence is a big deal or isn’t. But if you are waiting to make sure you are absolutely right before you publish, it’s gonna be a while.

Reminder: Both Theranos and Zenefits already had $1 billion-plus valuations before reporters were “wrong” on them. If reporters were wrong, the people paid to make bets with real cash were wrong too. Pando was mocked on Twitter by Y Combinator’s Sam Altman for not recognizing Zenefits’ clear genius at its demo day. It was literally part of the justification for banning us from future demo days.

With so many people insisting Zenefits was the real deal, you can understand why a lot of good journalists got it wrong. They made the mistake of listening to their sources. It happens.

If you want to be right 100% of the time, don’t do analysis. Just write up earnings reports. But don’t expect to add a lot of value either.

While it may have missed Zenefits flaws, part of the value of Farhad’s Zenefits story was exposing just how full of shit or wrong themselves the smartest people in the venture business also were during the peak of unicorn mania. A great follow up point that Farhad made in his subsequent story on Zenefits.

Sure, the two stories taken together may not have gotten everything right. But they did more to explain logic in investing at that the time in Silicon Valley than another thought piece on Facebook or another post-mortem on the Apple Watch published just to be safe.

And make no mistake: If reporters like Farhad and publications like the New York Times hadn’t written about Zenefits when it looked meteoric, no one would have given a shit that it was breaking the law and putting people’s health insurance at risk months later.

The reality is if you refuse to cover startups, you don’t cover tech. Especially as the definition of “startup” is now stretched to apply to companies worth tens of billions of dollars.

Private companies are secretive. Millions or even billions of dollars hang in the balance. Everyone has an agenda in swaying you. People will lie to your face “off the record” of course so that the only person that gets burned is you. If you dare write something critical, you get banned from all access that makes your job seem doable.

And all of us have been wrong. I was once an enthusiastic fan of Uber. But I credit the fact that I covered them from the earliest days and that I knew the founders for years before they started Uber, with Pando’s subsequent pattern of continually being right on them for much of the last few years. If nothing else, I know that false claims that they never wanted a fight and “an asshole named Taxi” brought it to them is total bullshit. They relished that fight from the very earliest days. Their eyes lit up talking about it.

Revisionist history only works if no journalists are there to record the truth.

There’ve been plenty of companies I’ve been wrong about. Plenty I’ve been right about. But the only reason I have a career as a tech reporter is because I’ve covered enough of these companies from cradle to grave over the last two decades that I know the right people to call, I can analyze what I see, or at a minimum, I was simply around and saw something so I can say it when I see it again later.

That’s not perfect, but it’s frequently more insight than the average reader or tech user has. It’s not as much as a board member who sees all the financials. But I’ll be honest with you about what I see, hear, and think, and he or she won’t. They can’t. It’s not their job.

Last time when big East Coast Publications decided they wouldn’t cover startups anymore, I was working for one. I know from experience that lack of coverage was the biggest thing that gave rise to blogs like TechCrunch, D, VentureBeat, and GigaOM. But the realities of staying afloat as a media company meant those same blogs have been sold for fractions of what they could have been worth, shifted to press release rewriting, or just plain shuttered.

Sadly, it’s been the bigger publications like the Wall Street Journal and Bloomberg and newly big publications like Buzzfeed that have consistently done the most watchdog reporting on the unicorn class. If those publications-- or even just their top reporters-- decide they’re just going to sit startups out in the name of never being wrong, they abdicate their role as tech reporters. And right now content economics haven’t left a great bench of smaller publications to pick up the slack.