Kudos to Uber: This actually be the first time they’ve been completely honest in marketing and advertising.
By Sarah Lacy
Jun 7, 2016 · 8 minutes

Uber’s political campaign had a new -- even novel-- message yesterday: We don’t hate our drivers!

As amplified by the New York Times and a boatload of other friendly press, Uber has rolled out several new pro-driver features and some great flowery language about how much drivers mean to them.

In China, however, the message to drivers-- and riders-- was somewhat more direct. Here’s what you would have see if you logged on to the Uber app in China yesterday... 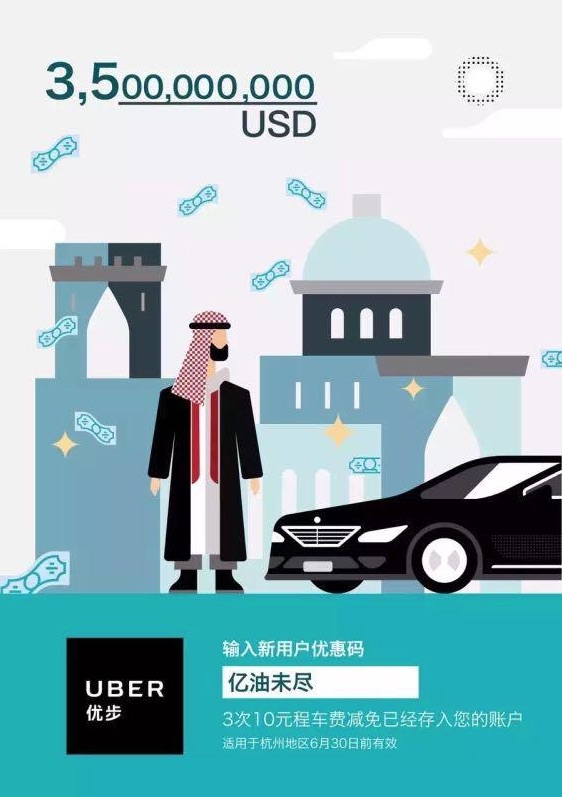 That’s right: Uber actually pushed out an ad boasting to riders and drivers that Saudi princes have just made $3.5 billion rain from the sky. More subsidies for everyone!

Kudos to Uber: This actually be the first time they’ve been completely honest in marketing and advertising.

It’s certainly far more direct that the silly justifications for the Saudi deal that it would help women achieve equality since… they aren’t allowed to drive themselves. Even Uber investors and supporters haven’t bought that. Even the usual Uber defenders like Fortune’s Dan Primack have worried what baggage this deal could entail, given the size of it, the oppressive regime it was raised from, and the fact that same oppressive regime is getting a board seat.

At least this ad justifies why Uber would risk all of that: Because it needs to keep making those same billions of dollars rain from the sky as subsidies in China.

Sources close to the situation have estimated that Uber’s spending in China is way over the $1 billion that Uber admitted it was spending a year ago, and could have even topped $1 billion already in the first six months of this year. That seems plausible given two facts: Uber has expanded dramatically to some 60 cities, and it also runs ads saying it’s 30% cheaper than its local rival Didi. If true, both have to cost more than Uber was spending a year ago. But it’s hard to know any real information, because this is Uber we’re talking about.

Uber China’s SVP of strategy Zhen Liu said last week that Uber would unequivocally be China’s number one Taxi app in a year.

See if this argument makes sense as reported by TechCrunch:

Liu claimed Uber is growing rapidly in China, to the point that it is only a matter of time before it snatches the top spot.

“Last year, we were only operating in eight cities and we were [at] about one percent marketshare. A year later, we are about one-third of the market share and operating in over sixty cities across China,” she said.

Let’s get this straight. Didi operates in more than 400 cities. In China, Didi completes several times more rides than all ridesharing companies in North America combined. It is the second largest ecommerce platform in China. And Uber’s Liu is claiming that in just sixty cities, from a position of 1% market share a year ago, Uber will overtake Didi in China-- full stop. Not in markets where they compete. Not just in services where they compete. There is no qualifier.

It’s worth noting that Uber has now spent two years trying to find a CEO of the $8 billion “company” that is Uber China. How many $8 billion companies do you know that have tried and failed to hire a CEO for two years? If Uber were truly poised to overtake Didi in just a year, every tech CEO in China would want that job.

We are to believe a company that can’t raise money on its own-- even when dangling shares in Uber Global as a sweetener-- or hire a CEO is about to topple Didi, a company backed by Apple, the Chinese Government, and nearly every Asian investing giant?

Uber’s Liu continued to explain that Uber China was raising more money, but even she seemed to intimate the lion’s share would come from Uber Global:

Uber China earlier this year raised more than $1 billion at a $7 billion valuation, and Liu said that the company is actively raising funding once again. From her comments and part history, it seems likely that some of that round will come from parent company, Uber Inc, which just closed a $3.5 billion investment from Saudi Arabia’s Public Investment Fund (PIF). Although Liu did not explicitly say that.

No shit. When the global press was claiming Uber was “killing it” in China a year ago, Uber China couldn’t raise money without Uber Global. Now spending even more on subsidies with no independent third party verifying that they’ve gained market share and competing against an even stronger, larger Didi, why would that be any different?

And if you were still in any doubt, they just published an ad showing Uber Global’s Saudi money being sprinkled over Chinese drivers. They basically drew you a cartoon map.

It’s a smart strategy. If I were an Uber driver in China, I’d be wondering how much longer those subsidies were going to last.

This reminds me of the time Groupon posted an job ad in China after its “like $1 billion” fundraising where it boasted “near endless resources” to compete in China. Unfortunately, what tends to happen when big Silicon Valley companies advertise themselves in China by the money they’ve raised is a little like what happens when online music companies go to labels with the same message. Smart locals bleed them out of money, and the companies have little to show for it in the end.

In China, we’ve already detailed reports that fraud is as high as 30% as drivers seek to cash in on all these subsidies. No doubt, there’s also some element of other “Groupon problem” -- where people will use a service at an artificially low price point, but won’t still be customers when the price rises to the level it needed to build a sustainable company.

Last summer, Didi was matching Uber’s subsidies, but according to both Didi’s own representatives and Uber’s own ads, that’s no longer the case. Didi still discounts to build new markets, but has said it’s profitable in half of its 400+ markets.

Both Didi statements and Uber’s ads fly in the face of Uber and Uber investors’ assertions that the company has to offer such insane subsidies in China, because the competition is doing the same. That’s what Uber wants the US business press and investors to believe. But in China, Uber is saying something different: We are 30% cheaper than Didi, because Saudi Princes are making dollar bills rain.

Note that the ads saying Uber is 30% cheaper actually name Didi-- they don’t just say “the competition.” Most companies in a position of strength don’t show their competitor’s name in the opening splash screen of their app.

Whatever benefit Uber is getting in China from the new infusion of cash, it’s sure to be short lived. Didi is itself closing a round that president Jean Liu said last week will be even larger. Apple has already put in $1 billion, and both Alibaba and Tencent are said to have reupped as well.

But you can drive yourself crazy trying to make long term sense of Uber’s strategy in China.

You can understand how they got here. It’s the largest ridesharing market in the world. They had to try. When they entered, Didi was still two companies that hadn’t yet merged. They had no real idea what they were going up against. And back then, cash was still readily available, so Uber did what it does: It used cash like a weapon. This was the first time that approach didn’t work.

The question isn’t so much the logic that got them here, it’s rapidly becoming what the breaking point will be. It isn’t an easy answer. Uber will not win this market, and it’s hard to see how they build a sustainable business there. And yet, six of its Chinese cities are its largest cities anywhere in the world. China is big enough that even 13% of the market is a lot. It’s an asset. And it’s an asset they’ve paid billions of dollars for.

Clearly the breaking point isn’t spending billions for low double digit market share. It’s doubling down on that. It’s willing to take further dilution and risk US optics of giving the Saudi government a board seat to keep making it rain in China.

So what is the end game for Uber in China? It can’t go public on the Asian stock exchange by the end of this year, as it promised investors one year ago. Not burning $1 billion to $2 billion a year in capital.

Maybe at some point they divest it in a sale, but to whom? I doubt Didi would pay as much as Uber would want, given they dominate the market and struggle with supply more than demand. If Didi isn’t having to pay subsidies in more mature markets, has no issues raising cash, do they need to pay up for Uber China? Why not take the Larry Ellison approach and grind them down year after year until they get the remaining assets for a bargain?

Would existing partner Baidu decide-- like Google-- it needs to be in this game and buy it or reconfigure as some sort of Uber-Baidu joint venture?

That might be the most reasonable option. Baidu at least has the balance sheet to give Uber a win.

Or maybe it’s just a waiting game. Maybe Uber is just waiting to go public on its global growth story, pointing to the US as a market it’s “proven” and stringing together a narrative of China growth, even if they are buying that growth for billions per year.

There’s exactly two things we know for sure: Uber won’t overtake Didi in a year, and it’s has no plans of reversing its China strategy now that it has $3.5 billion more in the bank to spend.