It may not be the biggest startup hub, but new data shows Chicago startups have some of the best returns

Next week on Pando, expect a lot of conversations about startup life outside the Valley.

In particular, expect to hear about how Chicago and the Midwest have evolved from a place where PayPal had to move away from to be successful more than a decade ago to one in which Braintree stayed and built a near $1 billion new payments company.

Both of the men who made those decisions-- Max Levchin and Bill Ready-- will be on stage for our annual Pandoland conference, along with Chicago natives like Dick Costolo, Chicago residents Brian Spaly, Sam Yagan, and Matt Maloney and people who have nothing to do with Chicago but are amazing speakers and thinkers, like Margaret Atwood and Nancy Jo Sales.

This event is the only one we’re doing this year and it has been more than a year in the making. Literally -- we booked Costolo and Atwood to speak nearly two years ago.

Why Chicago? As I’ve written before, Chicago and Chicagoans have been a vital force in the development of the Web since the earliest Mosaic days. And Chicago itself has emerged as an ecosystem, from one that mostly excelled at enterprise companies to one that’s had bona fide consumer hits like Grubhub and OKCupid.

One message you’ll likely hear a lot next week is that because there’s not quite as much money floating around, Chicago entrepreneurs tend to focus on revenues more than other hubs like New York and San Francisco.

A new study by Pitchbook shows the advantage in that approach when it comes to returns. Coming on the heels of a Fred Wilson post that lumped Chicago in with “third tier” startup hubs, Pitchbook wanted to look at startup cities by their actual returns.

In sheer number of deals separated by returns Chicago is clearly not the largest ecosystem, backing up Wilson’s grouping with cities like Seattle and Atlanta. (MOIC stands for multiple on invested capital) 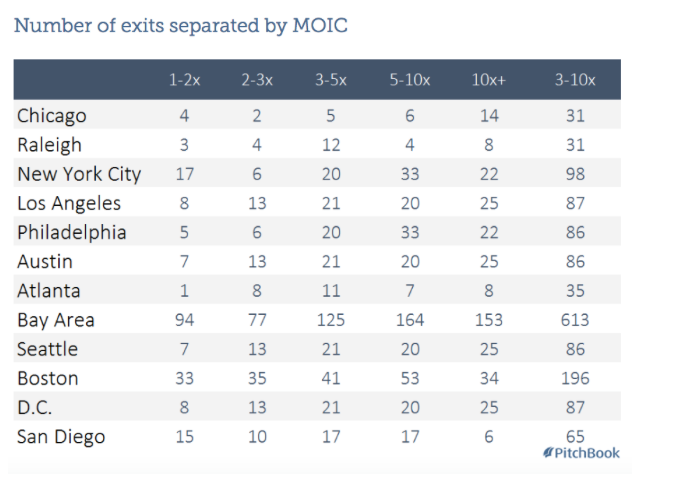 But when you look at exited deals on a percentage basis, Chicago had a higher percentage of companies in the 3x-10x category than any other market: 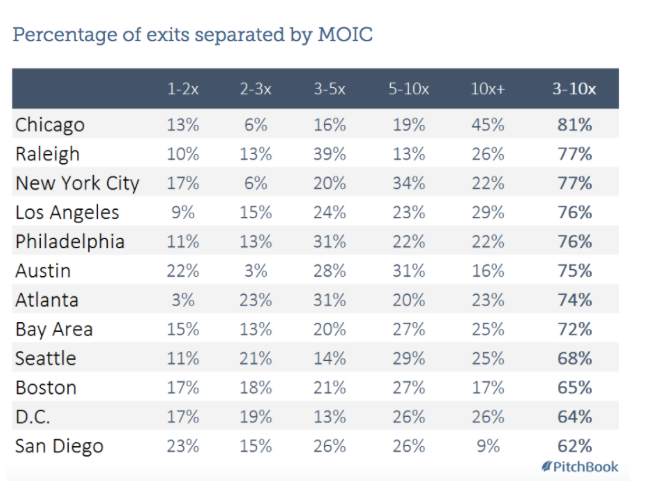 In other words: The companies that can get started, get capital, get traction and survive to an exit in Chicago have a greater likelihood of winning big.

It’s highlights two different ways of judging an ecosystem: Number of shots on goal versus the percentage of shots that score. Plenty of people would argue that too high of a percentage of wins means not enough ideas are getting funded overall. Others would just be glad their companies succeeded and returned capital in a market where capital is harder to come by.

(Both are better ways of assessing an ecosystems health than whether or not it allows Uber and Lyft to operate there or what hotels expect you to wear.)

If you are a Midwestern founder who’d like to maximize chances of being in that 3x-10x camp, we hope to see you at the event next week. There are a tiny number of tickets still available.