So much for Arianna and Travis' crusade against drowsy driving.
By Sarah Lacy
Jun 9, 2016 · 1 minute

This month: New driver bonuses all but guarantee it!

A New York source sends us the following: 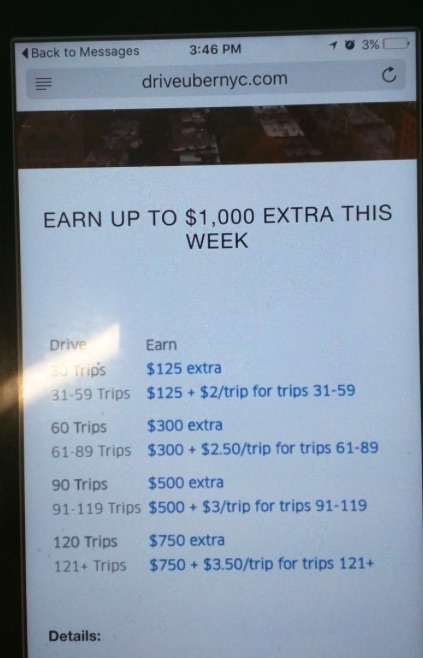 It’s a promotion by Uber in New York to encourage drivers to make more trips, with the promise of a $750 bonus for 121 or more trips a week.

What the offer doesn’t break down in how many hours an average driver might have to spend to make that many trips in a single week.

(There’s a similar promotion in San Francisco, although I can’t find any similarly published stats by Uber on the average trips per hour.)

Is this what Uber meant when it said drivers could easily offset the cut in wages through volume?

More importantly, is this what Arianna Huffington meant when she defended joining Uber’s board by claiming that the company shared her concern over drowsy driving.

As she explained to CNN: “Travis and I have also pledged to combat 'drowsy driving.' Uber has been instrumental in bringing drunk driving rates down, and we want to do the same for drowsy driving."

It’s hard to see how spending 18 hours a day behind the wheel just to make a living wage helps improve driver alertness.