A couple of weeks back, I wrote about Pando investor Peter Thiel's decision to become a delegate for Donald Trump.

Shortly afterwards, it was announced that Uber had taken over $3.5bn in funding from the Saudi government, tucking the company firmly in bed with some of the worst human rights abusers on the planet. (A bed, by the way, the Saudis now share with Uber's Russian oligarch investors.)

Meanwhile, Gawker -- currently being sued into oblivion by Peter Thiel -- is fighting back with help from its sole investor, Columbus Nova, run by Russian oligarch Viktor Vekselberg. You can read more about Vekselberg here. (As if that weren't gruesome enough, Gawker also secured a loan from Cerberus Capital --  yes, named after the dog that guards the gates of hell -- which has previously invested in gunmakers including Bushmaster and Remington.)

I get it: Silicon Valley tech companies -- and those, like Gawker, who aspire to be Silicon Valley tech companies -- have ceased giving a shit what you or I think. They'll gladly take money from the Saudis or the Russians or Skeletor or anyone else who can help them keep the coffers well stuffed. And the tech press has become so pathetically cowed -- so ass-kissingly terrible -- that they can do all of that with barely a peep of criticism.

I get all of that.

But at least until now I got the sense they were secretly ashamed of their new paymasters. That they didn't think palling around with murderers or racists or genocidal maniacs was actually something to boast about. After all, you rarely hear Gawker shouting out its Russian paymasters and even Uber felt the need to couch its Saudi investment in bullshit about how, hey, women might still not be able to drive in Saudi Arabia but at least they can get an Uber home!

And then, last night on Facebook, I saw this from Uber -- AND PANDO -- investor, Shervin Pishevar... 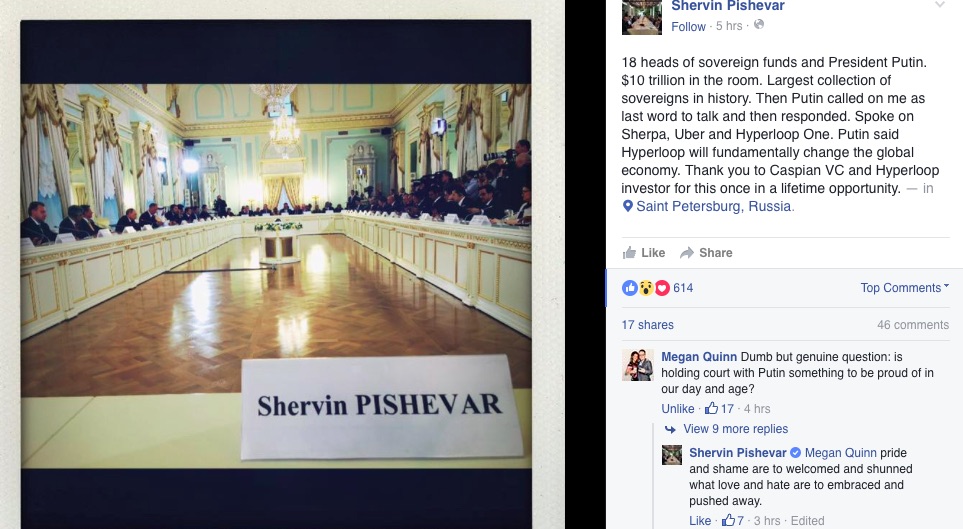 18 heads of sovereign funds and President Putin. $10 trillion in the room. Largest collection of sovereigns in history. Then Putin called on me as last word to talk and then responded. Spoke on Sherpa, Uber and Hyperloop One. Putin said Hyperloop will fundamentally change the global economy. Thank you to Caspian VC and Hyperloop investor for this once in a lifetime opportunity.

Just take a second to let that sink in. Pishevar is actually boasting that, not only did he sit down with Vladamir Putin, but the fucking psycho strongman actually declared himself a fan. "OMGYOUGUYS Putin  totally called on me for the last word and then totally responded and said he loves my work!" (Perhaps after the dinner they also discussed Putin's own claims to fame: throwing gay people in jail, murdering and beating his opponents, spying on his own citizens and once ordering the slow, painful murder by polonium of one of his critics, journalist Alexander Litvinenko. That last one being, admittedly, a very Uber thing to do.)

Kudos to venture capitalist Megan Quinn for asking the question we were all thinking:

Dumb but genuine question: is holding court with Putin something to be proud of in our day and age?

pride and shame are to welcomed and shunned what love and hate are to embraced and pushed away.

...an answer so incoherent it suggests that Putin might have slipped a little Polonium in Shervin's soup.

I don't really know what else to say. The ship has already sailed on Thiel and Pishevar. Neither of them is on our board (in fact no VC investors are) and we long ago spent the last of our investment cash and moved to a reader-supported model. But still a little part of me dies every time I have to write the words "disclosure: a Pando investor" next to a story about a Silicon Valley bigwig making out with satan or one of his minions.

So here's my ask: If any other Pando investors are reading this -- Saul Klein perhaps, or Zach Nelson, or someone from whatever Tennessee PD Investors LLC might be -- could you do me a favor? Next time your phone rings and the caller ID reads "BEELZEBUB HIMFUCKINGSELF" could you maybe just send it straight to voicemail?