Pew backs up what I’ve been saying for a year: Snapchat is utterly wasting its potential on Discover.
By Sarah Lacy
Jun 21, 2016 · 10 minutes

Contently has kindly read a myriad of new reports from Pew, Mary Meeker, and others to synthesize what you need to know about the ad business.

You know, the big pot of global revenues that you’re hoping makes your stock options worth something.

A lot of the numbers coming out are stunning, but not surprising. Mobile ads have gone from zero to $127 billion in less than ten years. And are poised to rapidly overtake desktop next year, according to researcher Zenith. And -- so much for the level playing field of the Web!-- power is getting more concentrated in the hands of a few companies.

The “big five” online ad companies get 65% of digital revenues. This trend of concentration will only accelerate, because right now Twitter and Yahoo make up two of those “top five.” (Another reason they should have merged back before things got quite so dire for each of them.) And really, the bulk of that is Facebook and Google. Elsewhere others have estimated the share of those two is already 74%, and Morgan Stanley has predicted it’ll be as high as 85%.

Facebook will only grab more market share as mobile grows. It’s dominating messaging, meanwhile Google has a lot to lose as desktop search gets less relevant.

This explains the stock market in 2016. Web 2.0 companies were founded on a belief that enough people were now online that the whole “eyeballs!” premise would work again. The key-- said many-- was getting big enough you could cram your own custom formats and units down the ad industry’s throat. That was enough for some companies not named Facebook to get public-- like Twitter and Yelp-- but they’ve struggled to grow.

Put another way: If the gargantuan audience of Facebook and Google carved a moat, and acquisitions like Instagram and YouTube filled it with water, the trend of custom formats filled the moat with alligators.

Like I said: All stunning in terms of just how well Google and Facebook have executed, just how powerful they’ve become in a pretty short time. Not quite how we expected the great democratizing force of the Web to turn out a few decades ago. But it’s not really surprising.

That’s the tech life cycle, isn’t it? Big get bigger, the weak die, the semi-strong consolidate, niches focus on steady profits and then a new powerful entrant comes in and disrupts it all. Right?

What is surprising is how poorly Snapchat fares. Not necessarily in ad spend, we know of course that Snapchat has only started to monetize. But in social media news consumption. You know, the thing they’ve gone deep on with Discover for several years now. 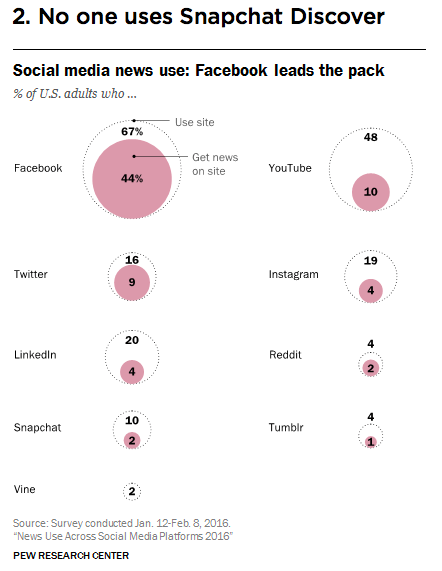 LinkedIn does better than Discover! And one of the reasons LinkedIn just sold was reportedly a view that its content strategy wasn’t going to be big enough to move the needle on a $20 billion business. Only slightly more people “get news” from Snapchat than Tumblr: A site that everyone is saying Yahoo has totally botched. Five times as many people get “news” from YouTube than Discover, despite the fact that the latter is the one that is ostensibly designed to be about news and the former excels at Haul videos and cats.

There has always been a lot of hype surrounding Snapchat. The ephemeral messaging app recently opened its advertising API to much fanfare—Adweek’s breathless cover story of the news called it a “colossal expansion” and a “new era” of the app—and everyone in advertising and publishing can’t seem to stop talking about its many promising features, including me.

But like all things in tech, hype is no guarantee for success. Despite the huge engagement numbers touted by publishers on Snapchat’s Discover feature—BuzzFeed CEO Jonah Perretti once said it made up 21 percent of the company’s traffic—Pew’s research suggests the numbers don’t add up.

According to its survey—which actually is from May but is referenced throughout the June report—only 2 percent of adults get their news from Snapchat. Compared to Facebook, the numbers are positively paltry. Perhaps Snapchat users don’t see Discover as “news” because of the unorthodox format, but even then it seems highly unlikely that a significant amount of people regularly use the feature.

I have spent the last year or more on a Bill Gurley-like campaign of concern trolling Snapchat on just how misguided betting this heavily on Discover is.

If Discover is the future of Snapchat the business, here’s where my bullishness on Snapchat is finally hitting a roadblock. Here’s the point where I say what so many reporters in their 30s and 40s before me have done: Throwing up their hands and saying “Well, I guess I’m just not the demographic, cause I don’t get it!”

And maybe that’s the point. Discover clearly isn’t built for me. Maybe it’s all about the 18-24 year olds, not the 40-year-old moms sending and receiving Snaps of their kids. But is Snapchat then saying that’s the only group on its platform worth building an ad business for? The genius of Facebook’s business is that it’s found a way to market to more than 1 billion people from all walks of life. Building a public company can’t just be about courting a young, faddish audience-- as much as that might be the sweetener that gets people excited about the platform.

It was Spiegel himself who argued to me in 2012 the power in Snapchat was how it was spanning generations, citing, for example, how many parents were using it to stay in touch with their kids who’d gone to college.

From September, explaining why going all in on stories was a no-brainer:

Stories simply extended the one-to-one messaging that made the service so popular to one-to-many for your story and many-to-many for live stories. It was as brilliant a migration of a product as Facebook’s paced, careful roll out from college social network to a place where more than a billion people in the world connect.

Discover, meanwhile, is a bizarre bolt-on that has nothing to do with why anyone goes to Snapchat. Worse: It’s so embarrassingly, self-consciously aimed at what aging content partners think millennials are into that it alienates anyone else… and probably a lot of millennials too.

Spiegel gets that his platform-- which rivals Facebook in video views despite having just 100 million users-- is the only thing standing between us and total Facebook social and mobile messaging domination right? He gets that for the -- what? billions?-- invested by most of Silicon Valley for the last decade trying and failing to challenge Facebook, and the billions more Facebook has spent taking every other would be competitor out of the market, he’s the only one left right? That we’re talking about a potential $20 billion, $50 billion, or even $100 billion opportunity if he executes right?

So why the hell does he keep wasting time, marketing power, and his brand position trying to be the next mobile VICE? Whenever a content company struggles it tries to rebrand as a platform. Snapchat has to be the only potentially insanely lucrative platform that for some insane reason is sitting around dreaming of being a millenials only content company.

I mean no disrespect to VICE. As the owner of a content company, I worship at the altar of VICE. They are the undisputed gods when it comes to content creation that we all wish we could be. In content, we’re all the “VICE of X.” But VICE is worth some $4 billion. Facebook is worth $330 billion. Hell, even a wounded Twitter is worth $11 billion. If you’ve got the choice-- and Snapchat does-- there’s no question which opportunity you go after.

Platforms outperform, resist fads and have far more impact in the universe than content creators, by a factor of nearly 3x even if you look at the best (VICE) and the weakest (Twitter.)

I’m actually dumb enough to bet my career on the content business, and I get this. How can Evan Spiegel not?

It seemed for last month he might have been backing away from it, with his comments in a keynote about the camera being the opening of the app for a reason, and it being all about user content, not lame repurposed WSJ articles for Millennials. Wrong. They’ve doubled right back down on it with a new redesign. As Snapchat focuses more on near-term monetization, sadly, this will likely continue because it’s easier to sell ads against content that looks like other social media content.

Shit, Twitter might even be a compliment. If you listen to Spiegel’s rhetoric about his goal being to “accommodate publishers” he sounds more like a nouveau Tribe. Say what you will about Facebook’s brutal treatment of those who trust it’s platform (and we have). But at least Facebook gets that it’s role in life is looking out for Facebook. Hence, it’s dominance.

It’s fate isn’t nearly as bad as Pinterest, which is also trapped in a high private market valuation, and I recently called a private Twitter because of its appeal to a stagnant, non-mainstream audience. But give it a few years continuing in this direction, and it could be.

This is interesting because of the inflection point we’re at in terms of mobile, and both Facebook and Google were legacy desktop companies. They should not be the ones coming into this with a position of strength. Indeed, they are only so strong because they “wildly overpaid” for would be competitors. They hacked the tech circle of life. While Facebook is far bigger, Google would be nowhere without YouTube.

We’ll never know exactly which benefitted the other more. The easy answer is usually Google and Facebook: They took out next generation competitors and built businesses off them that far outstrip what they paid. But we’ll never know what these startups could have done on their own, because the purchases were made so early. Would Instagram ever have gotten this big on its own? Would YouTube have been crushed by lawsuits? Are the ad engines and teams of Google and Facebook what has pushed video and mobile revenues so far so fast?

Facebook and (to a lesser degree) Google have so dominated with this playbook that they’ve started to make us all question the things we took for granted about acquisitions: IE, they always destroy the value of what they buy or at least diminish what it could have been. (PayPal)

So what about the Yahoo’s attempt to do the same with Tumblr? It goes to show the playbook only works when you are coming from a position of strength and acquiring a company that seems like it could become a huge threat. Yahoo had a position of weakness, and Tumblr-- while hot with a young demographic-- had been comparatively left in the dust by Twitter (Twitter!) and was said to struggle with monetization.

YouTube, Instagram, Whatsapp, and Oculus Rift on the other hand were all powerful forces with unknown futures. The same way Google and Facebook once were when Yahoo almost overpaid and ultimately passed on buying them.

Snapchat is the only surging mobile messaging app that has refused to sell. And Spiegel appears to be blowing his golden opportunity to become the next Facebook in a quest to become a mobile VICE.