I knew Britain was doomed the moment I saw Re/Code's headline, right after the polls closed. 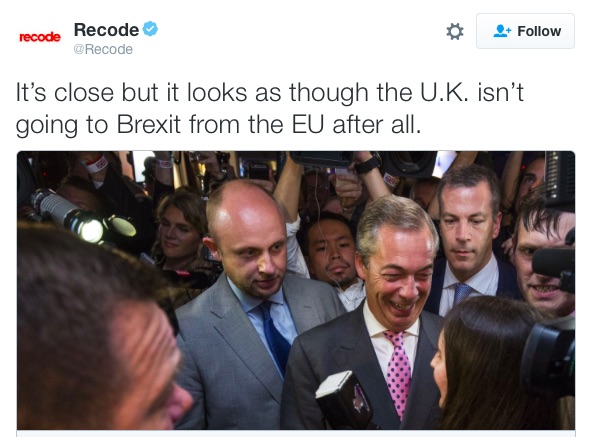 "It’s close but it looks as though the U.K. isn’t going to Brexit from the EU after all."

This, after all, is the publication whose editor once assured us that Travis Kalanick was a changed man, just days before it was revealed that Uber had plotted a million dollar smear camapaign against the familes of its critics.

A good rule of thumb: If Re/Code tells you something that wealthy, powerful people want you to believe is true... run. Run for the hills.

Sure enough, that headline has now been edited to read...

The U.K. votes to leave the EU and global markets are tanking

Yes, a complete surprise to anyone who knows diddly shit about the British electorare. To anybody who understands not a ha'penny jot about how voters outside London -- especially elderly, white voters --  feel about our European allies. To anybody who hasn't so much as glanced at a copy of the Sun or the Daily Mail, the two bestselling newspapers in the UK.

To everyone else the fact that the vote was tight, but that the xenophobes won the day, was shocking but certainly not surprising. There's a reason why one of the country's most popular comedy shows was called "Little Britain." We Brits are nothing if not self-aware.

So, yes, Britain has voted to pull the plug and sink into the channel, just to show Johnny Foreigner that we don't need his help to become an economic wasteland. The pound is plummeting, Sarah Palin is rejoicing and this guy… 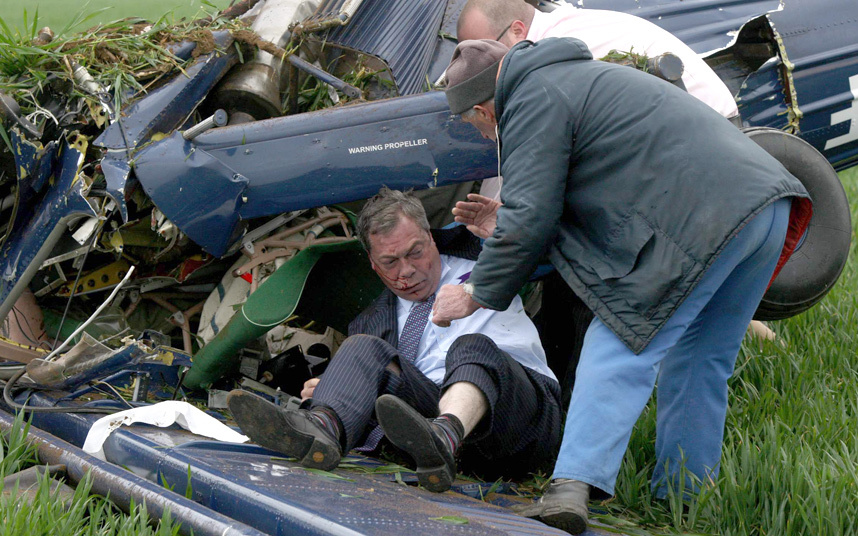 And yet. The last thing the world needs is another hot take on the last sad gasp of a once great country, or why this should be a warning for any American who thinks Trump can’t possibly win in November. You don’t need another British person whining about elderly racists or fretting about the prospect of Boris Johnson as Prime Minister. Donald Trump and Sarah Palin have said all that needs to be said.

What you need is some good news. A positive spin on these end times.

So here they are, my five reasons why Brexit is a good thing...

The city was already competing with London as the best beachhead for American tech companies looking to break into Europe.  It’s vibrant, cosmopolitan, packed with highly skilled workers and (even today) it’s a damn sight cheaper than the British capital. Now, with the UK poised to exit the EU’s free trade and free movement of labor zone, it’s the only smart choice for anyone building (or expanding) a tech startup in Europe. Congratulations, Germans!

2) Scottish independence is no longer a terrible idea

Even JK Rowling is on board. Those of us who were lucky enough to be born north of the border can now look forward to a year or so of campaigning, followed by a tidy "LEAVE" vote by the Scots. After which the newly-independent Scotland will be free to apply for EU membership, and its citizens -- who overwhelmingly voted to REMAIN -- will get back all the benefits and protections their idiot cousins in the South just voted away. We might even finally see a reunited Ireland too.

3) America got its “ghost of Shitmas yet to come" moment

A lot of young Britons thought the Brexit would never really happen. What developed nation would ever actually vote to euthanize itself? They underestimated how much angry old white racists love to vote against their own economic self interest. America faces a similar prospect in November and the Brexit is the wake up call that young, liberal Americans needed to register to vote. At least Boris (Boris!) Johnson and Nigel (Nigel!) Farage have succeeded only in becoming the most important men on a tiny, freshly-irrelevant island. President Trump will kill us all before the first brick is laid in his stupid fucking wall.

Ok, that's four. I was able to come up with four reasons why Brexit is a good thing.

To fill the last gap, here’s another picture of Nigel Farage making a dignified Brexit from his crashed plane…. 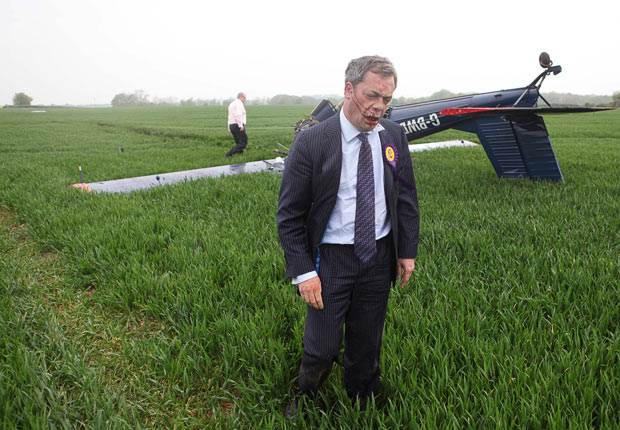