The business press really wants you to think Lyft is for sale. Is it?

My entire social media feed last night has been about how sad it is that Lyft is for sale. The reason: The news that Lyft is reportedly working with Qatalyst Partners.

Now, to be absolutely clear: I have no idea if Lyft is for sale or not. I have absolutely no reason to believe that it is.

What concerns me is how much of the business press wants you to believe it does. Just look at the headline or lede in nearly every major story on the news yesterday: 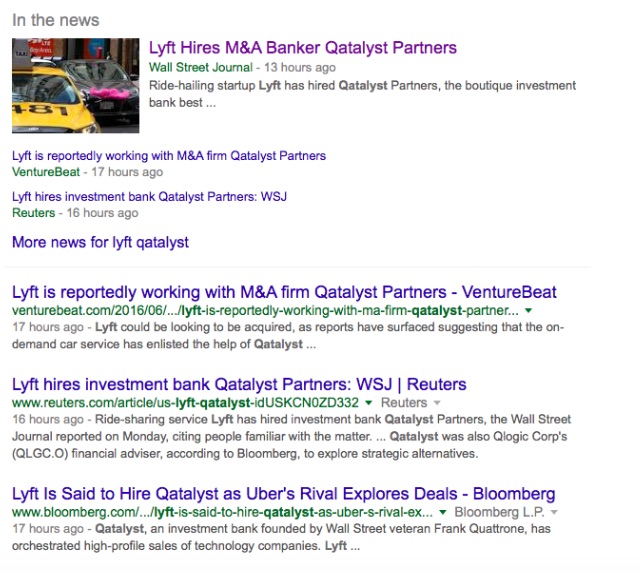 It’s telling that if you click through to read the stories in The Wall Street Journal-- which broke the news-- and others, they only say Qatalyst has reached out to automakers about buying a stake in the company. There’s no evidence or even a single cited rumor or anonymous source to suggest that the entire company is for sale. None. The headlines seem to rest solely on the fact that Qatalyst has sold other companies.

So why the fixation on Qatalyst’s history of selling companies? I suppose it’s entirely possible that Lyft is selling, and I’m the only reporter who doesn’t have the inside scoop. But if that’s the case, why isn’t it ever stated in the stories that reporters are hearing that?

It’s strange that all these publications would insinuate so strongly in a headline and/or lead that Qatalyst is “best known” for selling entire companies, but not even cite rumors in the story that Lyft itself is for sale.

Consider the Journal headline and deck, which-- let’s face it-- is all a lot of people read via social media:

But the story doesn’t cite any reporting to back up that Lyft itself might be for sale or might be struggling to raise funds:

Frank Quattrone, the founder and executive chairman of Qatalyst, has contacted companies including large auto makers about acquiring a stake in Lyft, the people said. It isn’t clear whether Lyft is aiming to sell itself or raise new funding.

That pattern was repeated in the rest of the business press. Here’s what Qatalyst is known for big up top, and yet, the only even “rumored” piece of information is that Qatalyst has contacted automakers about acquiring a stake in Lyft.

Many, like Vanity Fair, were even more direct in repeating the unsubstantiated claim:

The story cites no additional reporting or any new information suggesting Lyft would be selling more than just a stake in the company. Indeed, it notes that Postmates also hired Qatalyst. There’s no evidence Postmates is for sale either, and is also known to be raising a round right now. The farthest anyone went was ReCode which cited sources that Qatalyst “had approached” larger companies, but even it acknowledged it had no idea if those entreaties were for an investment or outright sale.

Here’s Reuters as picked up by Fortune:

Again, not even an anonymous source speculating on an outright sale is quoted in the piece.

It’s possible that Uber-- which is always incredibly adept at working these outlets-- is behind some sort of whisper campaign on this. After all, the rumors pretty much only benefit Uber. It convinces drivers that Lyft isn’t sustainable.

And that’s exactly how the story is being read. Here’s a snippet of the conversations happening on social, given the misleading headlines: 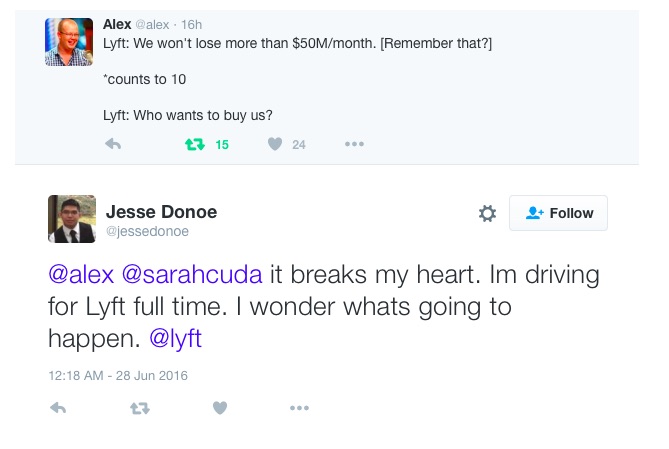 Although no one goes as far as actually making the case or citing reporting proving Lyft is for sale, there are a few other insinuations in the piece that might back that narrative up. The problem is they are just as easy to rebut.

The Journal -- and others-- emphasize that Lyft has raised less money that Uber, as seeming evidence it could be for sale. But remember: North of $2 billion per year of Uber’s burn are for overseas expansion. Uber itself has said its US business is “profitable.” Lyft only operates in the US. So basic logic tells you Lyft needs billions less per year than Uber.

And by any reasonable metric, Lyft has raised a shit ton of money: Some $2 billion. There’s no evidence Lyft has never struggled to raise cash before, even when Uber tried to strong arm investors not to invest in Lyft. It’s always had a more conservative strategy.

But what of the claim that acquisitions are simply what Qatalyst does, which is what these headlines and leads all seem to hang on. Well, it also does plenty of large private placement deals. The news reports also emphasize that Qatalyst has advised on some $33 billion in acquisitions this year. Wow! $33 billion! That sounds like a lot until you consider a full two-thirds of it was a single deal: LinkedIn/Microsoft. That deal was one of the largest in tech history and hardly typical of anyone’s business these days.

If Lyft were being forced into a sale, because it couldn’t raise cash now, that would be certainly bad news for Lyft. But it would also signal a major change in the macro funding environment. So far this year, foreign capital has still been propping up most of the decacorns and many of the unicorns. It would also fly in the face of Lyft and its partners’ claims that its market share in several major US cities is growing against Uber.

Indeed, Lyft and Uber are so similar as businesses-- right down to what they pay drivers and what rider pay them-- that if Lyft’s business was suffering that greatly, what would it say about Uber’s core business in the US? This category works or it doesn’t at these prices. If Lyft were that unsustainable as a business on the exact same model, how could Uber’s US business be so solid?

And this is-- to some degree-- just a cash game. Lyft and Uber are essentially commodity products in the US. The apps look the same, the business models are identical, the two have had years of rapidly matching each other feature-for-feature, and most of the drivers drive for both. Customers tend to go to whoever is cheaper, whoever isn’t surging, which drivers are closer.

Few analysts I’ve spoken to believe that this will be a winner-take-all market. Lyft is clearly the only major number two. It’s supposedly growing market share. It isn’t saddled with the billions in international burn.

Does that sound like a company being forced into a sale?

There’s also another reason this sounds implausible to me: A great many billionaires need Uber to have a strong US competitor. Most notably Didi Chuxing and its backers including Alibaba, Coatue, Softbank, Tencent, and others. Didi’s international coalition of non-Uber’s is so core to its long term strategy that it’s backed companies like Lyft, Grab, and Ola directly.

There’s one major weakness Uber has: It still needs constant infusions of capital. As long as its business in the US is profitable and dominant, it’s able to say it’s proven its model and it’s just a matter of time and capital to win other markets in the world. But if Uber is on the ropes in Europe, China, India and is losing market share in any major US cities, that’s a different narrative, and one Didi and its allies can use. Uber fighting a battle at home helps Didi, and its allies significantly.

These backers represent trillions in combined market cap and cash under management, and they’ve be heavily on Didi. Is it plausible to believe they’ve just given up on Lyft?

Again, it’s possible I’m missing something here. Or perhaps the bodies of these articles are more correct that the grabby headlines.

The obvious question is if Lyft isn’t for sale, why doesn’t it just come out and rebut the report like Didi does every time Uber insinuates or outright says false accusations against its business? It could be because the company is indeed open to a sale, the Journal and everyone else just don’t want to mention any reporting that backs that up.

Or it could be because it’s Lyft: The most milquetoast company in Silicon Valley when it comes to marketing or defending itself.