Tech product placement in Hollywood movies is nothing new.

Since Legally Blonde and Mission Impossible in the early 90s, Apple products have shown up in hundreds of movies. More amusing have been the desperate attempts by very uncool brands to buy coolness through the silver screen.

Take, for example, Yahoo’s placement in Inspector Gadget or the character in Hawai 5-0 urging his pal to “Bing it!” And who can forget the AOL love-fest You’ve Got Mail?

The tech companies get a brand uplift and movie studios make back some of the cash they’re losing through declining box office and piracy… facilitated by tech companies.

Today, though, there’s an even more lucrative revenue stream than product placement: China. Success in the fastest growing movie market in the world can turn a flop into a golden goose, which is why every big budget film this year has an obligatory Chinese co-star and, ideally, a scene where the entire cast goes to China for absolutely no reason. If you want to see that done brazenly but effectively, see Independence Day II. If you want to see the worst possible example, and have also lost the will to live, check out Now You See Me II.

And so I suppose it was inevitable that the two trends would collide and we’d start seeing Chinese tech companies paying to appear in expensive Hollywood movies. Sure enough, when Sarah and I went to see Independence II last night, we found two surprises. First, the movie isn’t nearly as dismal as the reviews suggest. Second, there’s a scene where two of the stars connect using… Tencent’s QQ video chat service. 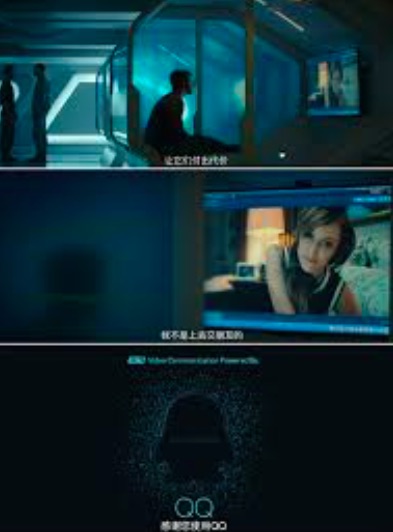 The reference might have flown past most Western viewers, but QQ is hugely popular in China with almost a billion active accounts. It holds the Guinness World Record for the most simultaneously online users of an instant messaging service, which I suppose is an impressive thing to hold. (The name, funnily enough, started out as a rip off of ICQ until AOL threatened to sue.)

Except to see Baidu, Alibaba, Didi and more coming soon to your local theater. And, speaking as Brit, I look forward to Americans feeling some of the same confusion I felt at seeing US only brands promoted in the movies of my childhood.