One of the hazards of business journalism is Schadenfreude.

It's one thing to feel some justice when a Turing Pharmaceuticals gets its comeuppance. It's another when, in the hyper-accelerated cycle of rise and fall in the tech world, a company stumbles, then declines, then face-plants, then tries to stand up and brush the dust off itself, then gets whacked in the back of the head, then – repeat this cycle for several years - just lies there waiting for it all to come to an ignominious end.

What does the tech press say then? In such cases, including downfalls that had been foretold before they happened, it's not just unseemly to take any pleasure, it makes little sense. So a different word is called for. Maybe Schadentraurigkeit? Or since my German is abysmal, how about the contemporary Americanism, “Sad!”

Whatever the apt term is, it deserves to hang around the corporate neck of Yahoo! As Sarah Lacy pointed out yesterday, following the minutiae of Yahoo!'s inevitable sale is like watching the later episodes of The Walking Dead. Yahoo! finds itself enduring past its expiration date in a post-apocalyptic nightmare. Watching for it to become ingested by some hungry entity is like watching those endless, increasingly indistinguishable scenes of the durable cast fight off the tireless walkers. Again. And again. And again.

And yet I couldn't help tune in to the latest episode of The Walking Yahoo! in which Marissa Mayer faced down investors in the annual shareholder meeting. After all, the 2015 shareholder meeting was something of a confrontational affair, as these meetings were conceived to be when a company is floundering.

Last year, Marissa Mayer asserted the “multi-year transformation” of the company was apace. "We're working very hard to take Yahoo, a very iconic company, and return it to greatness," she said. Investors pushed back, asking, what in fact is Yahoo's main focus? Mayer's answer then: “Our core focus is to be the guide to the world wide web.”

At the time, that answer was a little bittersweet. Because 20 years ago, when the company was ripe with dreams of world wide web domination, this is what Yahoo! was. @Home, Excite, Lycos aspired to steal its crown, but Yahoo dominated, thanks to reliable features like mail, financial data and sports stats. In 2005, Yahoo! was thriving.

Then came social, which Yahoo! had at best a tenuous grasp on. Then came Microsoft's $45 billion bid to buy the company. What looked back then as a suffocating acquisition for Yahoo! has become a lost opportunity. Yahoo!'s valuation has declined since, and is widely acknowledged to be as high as it is because of its stake in Alibaba. And as we've said, that minority stake in Alibaba is the tail that has been wagging the Yahoo! dog for some time.

Enough of Yahoo!'s history. This is about Yahoo!'s bleak present and whatever future stands before it. The shareholder meeting Yahoo! held yesterday was hardly a confrontational affair. It was more of a ritual of supplication. Mayer addressed the crowd in what can only be described in a cowed fashion. Her rehearsed hand gestures signaling awkwardness and defeat. Her pitch about “Mavens” ringing more hollow than ever. Her only substantial news being on the theme of retrenchment: The sunsetting of 130 properties. The sale of prime real estate in Silicon Valley for $250 million The nearly $10 billion in stock buybacks.

It's hard to watch this performance by Mayer. It's not easy finding the words to describe it.

The next time you find yourself in a stifling fit of self pity, watch it. Or, the next time you find yourself so gloriously high on top of the world your better self asks for a reality check, watch it. Or, the next time you need a reason to have a tall glass of whiskey, or a steaming-hot cup of chicken broth, or a moment in a fetal position with the blankets tugged over your head – whatever the urge is, just watch it. In my years of shareholder meetings and analyst calls – most of which are, I admit, dull to the general population but bizarrely interesting to me – I have never seen anything like it.

At 3:00 in, Maynard Webb, Yahoo!'s chairman, asks the crowd for a round of applause for Mayer. It's thunderously underwhelming, less than half-hearted. It's not the custom of a speaker soliciting applause to himself clap for others, but this is the position poor Mr. Webb finds himself in. Alternately pounding his fleshy hands together and picking up the sheet of paper that, Eleanor Rigby -like, nobody will celebrate.

At 16:30, general counsel Ron Bell announces Yahoo! will discuss earnings according to the increasingly outmoded non-GAAP results, and thanks the shareholders for understanding. Which they probably will never do. In fact, given the silence that greeted his gobbledygook, they already don't.

At 17:10, Mayer scoots up to a stage so much more prepared for her than she is for the audience. I recognize her body language in my own life. I've exhibited this same body language when my dog takes a crap on someone's lawn and I hurry, plastic bag in my hand, to clean it up. Here is a photo of the audience that greeted Mayer after the multiple appeals at a rapturous introduction for her. 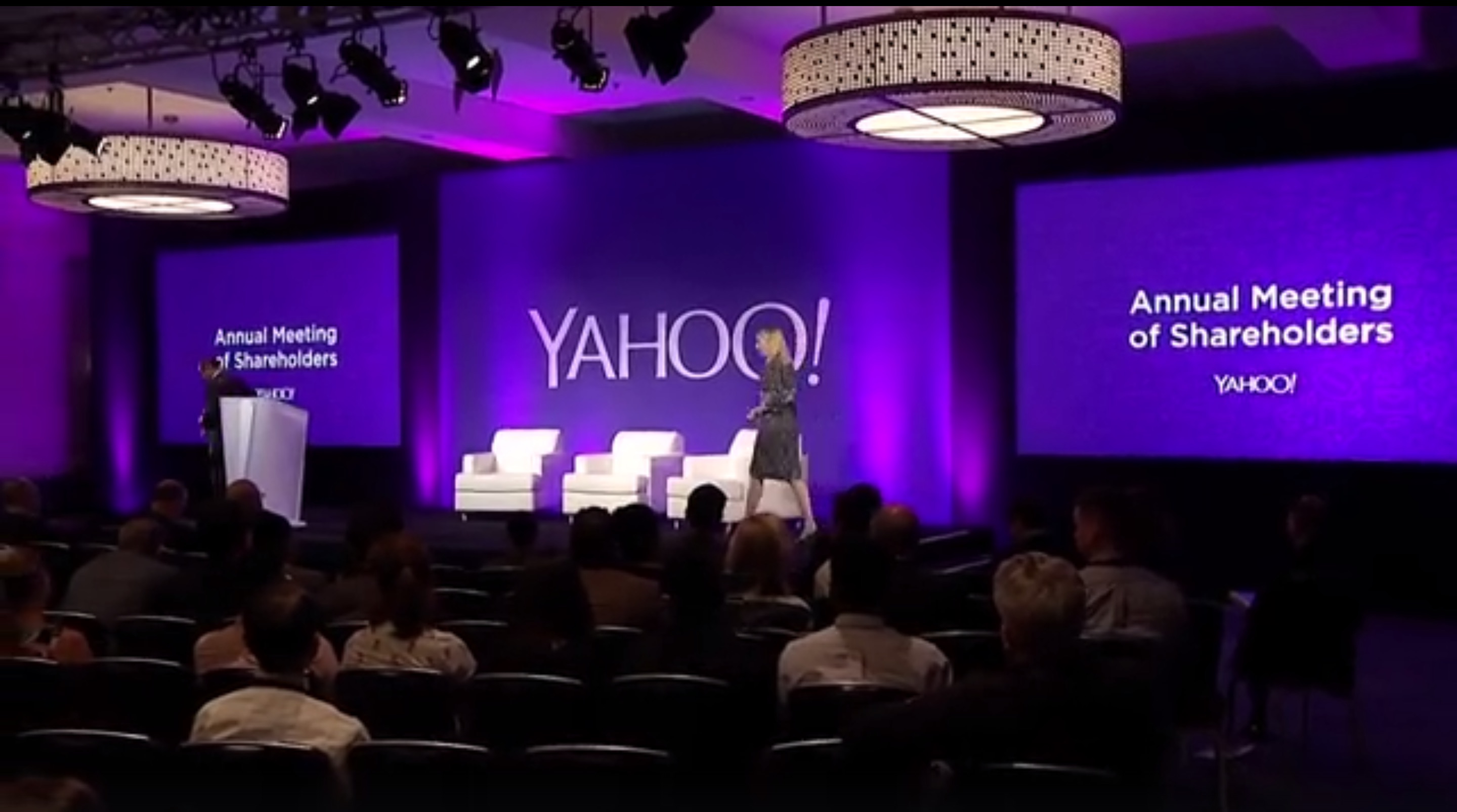 Is it the true believer in the open web, an ideal Yahoo championed long before it lost its way? No. Is it the arcane god of second chances, which brought Priceline and eBay back from the near dead? Nope. Is it the activist investors who drove Yahoo into a sale, or as Mayer insists it be called, a strategic alternative? Mmm, no, those guys are AWOL in this purple, cavernous hall.

Mayer's mike is out for part of her intro, so she ascends the stage while intoning these words: “...me to be asked here today.” Then adds, “Today is all about you, our shareholders.”

Who knows what that means? The shareholders, or the ones with any significance, are elsewhere. And so this should be a prime opportunity for some fuck-you moment. The chance Mayer has secretly craved for a few years now, to tell her adversaries to piss off, to reassert her instincts as a leader, to throw all that has been wasted beyond her own doing into a glorious bonfire that burns, gloriously but briefly, into a gesture that lasts for a lifetime.

Mayer didn't give herself that. Instead, the ultra-humiliating Q&A.

At: 28:45. This is the most painful, queasy moment of the call. Bell asks for questions and comments and looks back and forth...

What questions and comments do you have?

Finally, a shareholder speaks. He's wearing a white t-shirt and a black backpack as he speaks, a style distinguished from the button-down oxford, khaki-pants regalia of Silicon Valley that attends these meetings. Which speaks well of him. He thanks Mayer for giving him more money because buybacks have reduced the overall share count. Forget that Yahoo's earnings per share has been negative for the past couple of quarters.

Mayer nods sympathetically to this shareholder. “Thank you for holding on to your shares,” she says. The CFO, Ken Goldman, remains as resolutely silent as he's been today, an anomaly despite his chattily precise persona. The whole moment is weirdly still. The shareholder thanks Mayer for holding the shareholders meeting at 2pm instead of 8am, an hour when it's hard to don a t-shirt and backpack, apparently, and Mayer gives a nod of noblesse oblige, and Goldman wishes he were somewhere else.

This is Yahoo! today. I dropped that naive exclamation mark a long time ago when writing about the company, but I pick it up again now because the end of everything that this unwelcome act of punctuation ever thrust into your digital life is now so, so near. An exclamation can be a cry of ascendancy, as Yahoo! deserved 20 years ago. Or it can be a cry of despair (Sad!) once the end is nigh. A death rattle. Of sorts. And that is what I fear we've heard this week.

May it sound one more time, full of throat. May its punctuation echo forever unto the ears of startups that dare world wide web domination. Or any domination, really.

May it... Aw, fuck it. It's over. Even from the truest believers, we heard this. It's over. May the exclamation mark rest in peace.