When I first started covering this industry we didn’t talk about “venture capital” we talked about “alternative assets.”

It was a bundle that included private equity, other non-liquid investments and the tiny little asset class that venture capital was back then.

Then, the Internet happened.

We’ve already reported -- and predicted -- that the same macro trends we’ve seen in the funding market would continue in the second quarter of the year: More money, fewer deals, and an increasingly lousy environment for exits.

We’ve postulated that the surging cash in emerging markets-- which shows no sign of abating en masse-- is what’s continuing to fund most of the unicorn, mega-rounds.

And we’ve detailed at length just how much VCs have been wishing for some sort of correction-- particularly when it comes to these late stage rounds.

But digging through more of these second quarter reports last night, a thought struck me: Should we start calling this thing-- these billions of dollars that go into pre-IPO high growth tech companies-- something other than “venture capital”? Because the bulk of that capital isn’t actually venture capital, and venture capitalists themselves have lost all control over the most highly valued companies in the ecosystem. 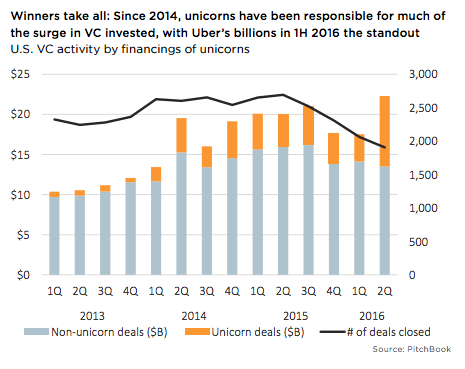 Sure, VCs influence wanes anyway when a company goes public. It becomes something else, VCs frequently rotate off the board eventually, and the company has a whole new set of problems and pressures. Frequently the management has to change to adapt to that.

But there’s a huge difference: VCs may lose control at the IPO level but they also are able to sell their shares.

There’s no difference in how big of a “win” Twitter is for Mike Maples as it languishes at a fraction of its former value and promise now, versus its earlier robust post-IPO self. Because post-IPO-- after various lock ups-- he was able to sell his shares.

But what if Twitter had taken the extreme anti-IPO position that many of the largest private companies today are taking?

That’s the gamble that some of these mega-unicorns are taking and all that late stage capital-- with high valuations and little to no strings attached-- is enabling them to do. Meantime, VCs are mostly sitting on the sidelines, frequently with no real board control, not enough of a voting stake to change anything, and no leverage of future cash because the cash has long since stopped coming from them.

Think of this another way: Almost all of these companies tend to have an arc to them. It’s hard enough for a company like LinkedIn or Yahoo or Twitter to seize on one major innovation or product people love. It’s harder still for that to translate into a large business that can go public and be worth billions of dollars, even rarer to be worth tens of billions of dollars.

But only a handful of companies -- Amazon, Facebook, Google, Netflix, and the like-- manage to grab onto a second thing. Or a third. To survive the next major inflection point, or be innovative, paranoid, or nimble enough to grab onto the next wave.

For everyone else-- and these include many amazing companies lead by amazing management teams-- they inevitably start to decline. The smart ones-- like LinkedIn-- grab onto a larger giant once it starts to happen. The more arrogant or delusional ones keep hoping they’ll acqui-hire or cut or pray their way to future relevance and that’s when it all goes sideways. The extreme of that is Yahoo.

So let’s assume that there will be, say, five companies with the luck, core business, and skilled executive team of an Amazon, Facebook or Google in the current crop of unicorns.

The rest-- at least the the lucky ones that survive -- will fall prey to this cycle.

Public market investors-- hedge funds, mutual funds and the like-- understand this. They also get that the biggest surge of growth for a company like Google and Facebook came just before and just after those companies went public. As companies put IPOs off longer, that’s the reason these investors started bidding up private stakes. The cycle of life was the same for these companies, the IPO was just being moved once the company was larger and a lot of growth had already occurred.

So far, that’s worked out OK for a company like Facebook, Twitter or LinkedIn because all three ultimately had successful (if choppy) first six months to a year trading as a public company.

What if that window gets pushed too far? What if the peak of a company’s value occurs when its still private? And not because it has an unreasonable valuation, but because the next wave of technology comes and the slow decline that would normally happen in the public markets happens before the company can even get public?

It’s possible that’s happening with Pinterest now. And it could very well happen to Uber. In the case of Uber, we see the inflection point. We know it has better funded competitors at that inflection point. Better funded competitors who have more of the pieces required to thrive in a self driving car world: Those would-be competitors have the hardware already (Google/Tesla), they have the brand (Apple/Tesla), they have huge installed bases as well (Apple/Google). Uber has a great driver management app, integrated with a mashup of maps and payments and other technology that already exists elsewhere. Lyft has a nearly identical app. Uber has an installed base, but Lyft and Uber have both shown that more subsidies can increase your base, so that’s really just a function of cash.

The one thing Uber has that no one else has is the one thing it keeps saying it can’t wait to get rid of: The drivers.

Uber could well surprise cynics like me when this inflection point hits. But it’s going to be much harder than what they’ve done so far, and a handful of companies have ever made a leap like that. But getting public with a $60 billion valuation is going to be a lot harder with those set of risks, versus Didi and Lyft and a crash cash burn today. Early investors will still make plenty. Uber executives and founders will. But the bulk of the cash that’s come into the company could be left with nothing.

Sure, that’s just Uber. And few companies are in its league when it comes to valuation, cash burn, late stage fundraising and all the things that so worry VCs right now.

But each cycle the dominant private company changes the rules around company formation and financing. Netscape changed the idea of what a company could be “worth” after 18 months. Google set new rules about how late you could go public, refusing to give guidance, having a dual class of shares, and tried to democratize the markets with its dutch auction IPO. Facebook pioneered trading of secondary shares for employees and early investors well before an IPO and changed how companies thought about acquisitions to ensure they didn’t get disrupted.

Each of those strategies worked for those companies and ripples of them are still mimicked by younger companies today. But each trend was also carried to unhealthy extremes. Hundreds of dot coms tried to do what Netscape did and wound up taking non-companies public, bringing on an epic crash. Google arguably left money on the table with its dutch auction. Facebook’s crazy quilt of secondary shares was seen as a disaster that smaller companies struggled to weather. Every startup is avoiding that fate these days.

For better or worse, this is Uber’s contribution to the continuum as the largest privately held company of this wave: Putting off an IPO later, allowing almost no one to exit, and gambling that it will make a second major inflection point of technology before anyone gets to record “a win.”

Back to my original question of whether we should even consider “venture capital” part of what’s enabling this trend: Ultimately, we have to. Because the fate of venture capital is tied to these late stage deals. Unless they can find a way to get liquid, it’s still very much their problem.