Funding is drying up in food delivery. Who has an actual business?

Shit gets real for the on demand world’s most overfunded segment.
By Sarah Lacy
Jul 13, 2016 · 3 minutes

Funding for food delivery companies fell for a second consecutive quarter in the second quarter.

Well at least one thing about the venture world makes sense.

As we’ve reported ad nauseum over the past few years this space is not only the most heavily funded segment of the on demand company in terms of deals completed, but it’s up for debate if any “solving dinner” companies will ever join GrubHub as stand alone public companies.

The meal kit companies-- even the ones that sell an amazing product and do a phenomenal job at execution like BlueApron-- only appeal to a fixed demographic, and I worry the churn of customers is astronomical. Munchery has done a better job at customization between offering meal kits and prepared food, all on demand, by subscription or one-off. But all that customization has to hurt operations and scalability. And unfortunately, Munchery just doesn’t have enough breadth of product to keep customers interested for long, in my view. Munchery is great when you have a new baby or a family emergency and need to just outsource dinner for a few weeks. But beyond that, the offerings are too monotonous and frankly, not that delicious and certainly not low-calorie.

I’m more bullish on the logistics players. Still, Instacart and other grocery delivery apps are in a difficult position amid Amazon, Google, Wal-Mart and others, and rely heavily on part time workforces not automation. Meantime, Postmates and DoorDash will run up against GrubHub, Eat24, Uber, Amazon, and the rest too. Maybe out of these there’s one big one. Or maybe if one emerges, Uber or Amazon or Google (or Lyft?) just buy it.

In a rare sign of a market rationally correcting, funding is way down. According to CB Insights, the category saw 44 completed rounds in the second quarter compared to 41 in the first quarter. The peak was in the fourth quarter of 2015 when 76 deals were completed. But the cash was way down. Those second quarter deals added up to just $320 million-- an almost 50% drop from the first quarter and the lowest amount of dollars going into the space in more than two years. 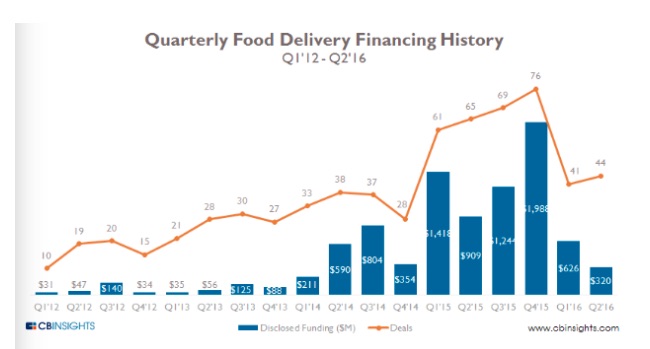 There’s some rare good news-- at least for US startups-- lurking behind these numbers: A lot of the overfunding of the category happened outside the US.

Perhaps because of the threat of the big incumbents like Google and Amazon, out of the top ten most funded food delivery startups, only two were based in the US: Instacart and BlueApron. Neither of them made the top five. They include Ele.me with $2.3 billion, followed by Delivery Hero at $1.3 billion, Womai at $320 million, FoodPanda at $318 million, HelloFresh at $278 milion. Comparatively Instacart raised “just” $275 million and BlueApron has raised “just” $193 million.

That’s fascinating, especially considering some of those like BlueApron and HelloFresh compete directly. I’ve tested both and BlueApron was hands down the superior product. That they’ve done more with less in a larger home market is impressive. Not impressive enough that I see them going public, but I’d much rather be a shareholder in BlueApron than HelloFresh.

I can’t think of any other category this hot in recent years where so much of the funded didn’t go to US companies. Should these trends continue the bulk of the carnage will be felt overseas.

We’re still not seeing tough decisions being made. None of the major companies have been shuttered, there are few reports of major downrounds, and we’ve seen no meaningful consolidation. With funding drying up, we’ll start to see pretty quickly who has a healthy underlying business and who doesn’t.