I guess we have to forgive Josh Tetrick for the weirdo eggs-without-eggs stuff now.
By Paul Bradley Carr
Jul 18, 2016 · 1 minute

Say what you like about print, but there's no digital ad format that comes close to the impact of this ad I flipped to, sitting by the pool of my Arizona hotel yesterday... 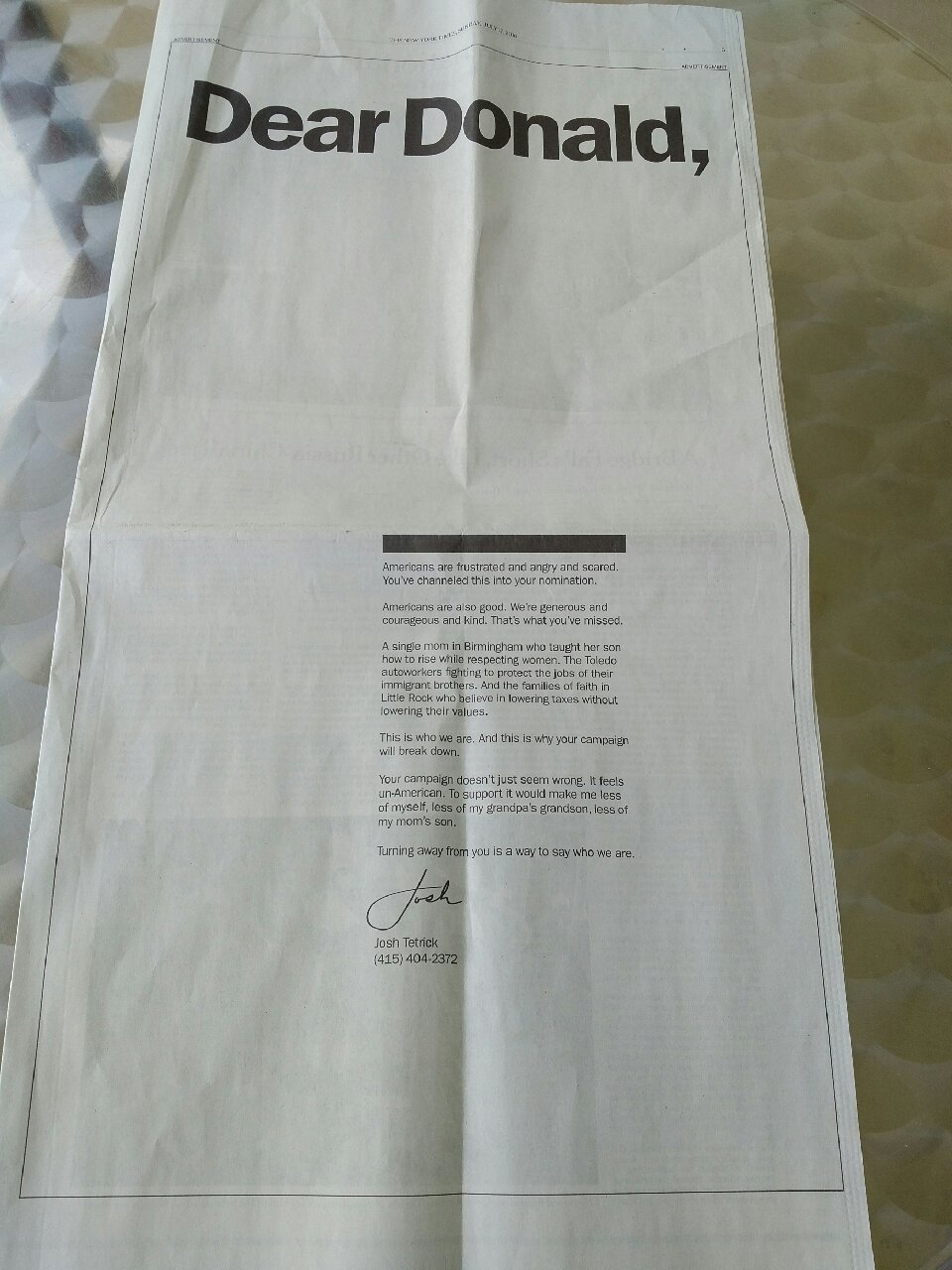 A variation on the ad also reportedly appeared in the Cleveland Plain Dealer.

When I first saw the ad, I wasn't near an Internet connection so couldn't look up the name of the guy who signed the ad, Josh Tetrick. Still, it sounded familiar and the 415 area code in the ad, plus the fact that a full page in the times costs somewhere around $190k, hinted that he was probably a tech guy.

It took me a few minutes to remember, and a half hour to actually check: Tetrick is the CEO of Hampton Creek, the weirdo "let's reinvent eggs" startup that Carmel DeAmicis wrote about here on Pando.

Reached by Quartz for comment, Tentrick explained why he was spending his own money on the ad:

And so say all of us, Josh.

Quartz did however miss one tremendous irony in Tetrick spending so much cash on an anti-Trump campaign. Among the investors listed on Crunchbase for Hampton Creek is Founders Fund, the investment firm headed by Peter Thiel (also a Pando investor, it constantly pains me to say). According to TechCrunch, Thiel's firm invested $1m in Hampton Creek's seed round.

Thiel, as the world knows, is a financial supporter of Donald Trump, and a Trump delegate. Thiel is also one of the few remaining "celebrity" speakers still scheduled to speak at the GOP convention in Cleveland after  Tim Tebow came to what might laughingly be called his senses.

So here we have a Thiel portfolio CEO spending close to $200k to fight back against the hatred, ignorance and bigotry promoted by Theil's prefered Presidential candidate.

Kudos, Josh Tetrick. I gladly take back all the loony eggs-without-chickens stuff. You do you.