Startups increasingly rely on the corporations they should be disrupting. What could go wrong?

In any other era, I wouldn’t devote this much time to covering a 60+ page report on the state of corporate venture capital.

Hell, I might not even devote this much time to reading it. And no one loves venture capital stats more than me.

To recap: We’re more than a year into the trend of deals slipping quarter by quarter, and yet dollars invested increase, bob up and down, or hold steady based on whatever study you look at. There’s been some evidence of deceleration of new funds, but no massive reckoning to speak of yet.

Here’s a snapshot from the MoneyTree survey, which shows slow deceleration in deals and choppiness in dollars, still way up from 2013 levels: 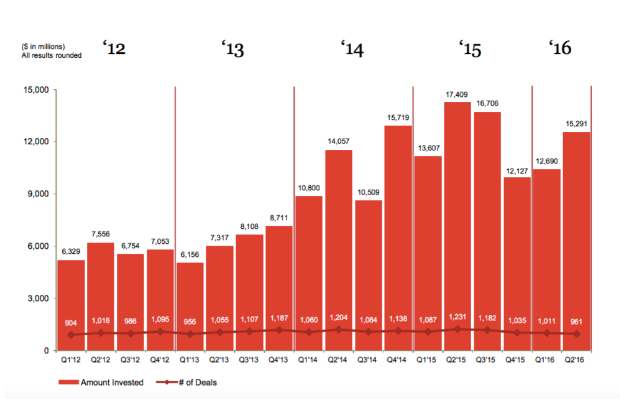 What it doesn’t show is a crash. Unicorns and mega rounds have slowed but they are still happening.

Traditional VCs blame “the tourists.” That include corporate VCs. Like international VCs-- another massive prop in mega rounds and valuations-- corporate venture capital shows no sign of packing their stuff and leaving.

Top line: The first half of the year shows a more modest version of the same trend venture capital has experienced generally. Deals were down just 6% while money increased 3%. In the second quarter specifically, both deals and dollars were down. Finally! A research report where both numbers actually fall in a quarter! 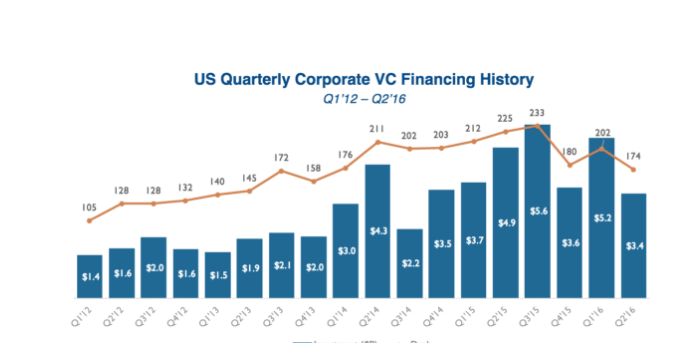 Still, 2016 is on pace to be a record year for corporate venture capital by a few metrics.

Some details that spell out just how reliant startups have become on corporations they should be disrupting, per CB Insight’s recent report:

2016 is on track to see a record number of new corporate venture capital funds. More than 50 made their first investment this year. Yunno, the year the venture markets were supposed to be contracting. 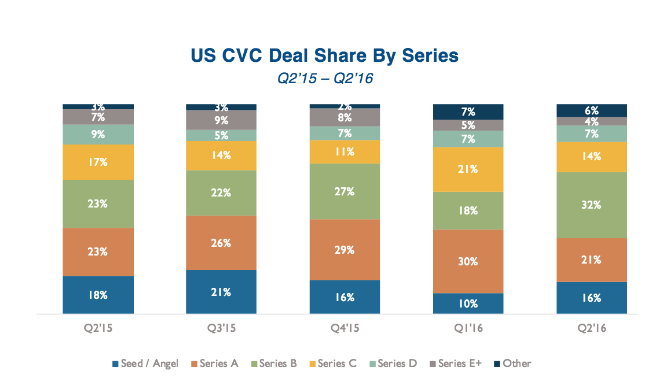 Speaking of vulnerable, the average deal sizes from corporate VCs are substantially larger than the average deal sizes from traditional VCs. Just another sign of the so-called “venture capital market” getting away from actual VCs. Deals done not by an actual corporate venture firm may be even riskier, because they are one-offs and there’s little precedent. Heed the lesson of Lyft: Your biggest dollar investors may not have your interest top of mind.

Intel Capital-- long the most active investor of any type-- has been dethroned by Google Ventures. You know, the group that has thrown portfolio companies under the bus. Also, note Google Ventures’ most successful investment is Uber… which Google is not competing directly with.

In North America 60% of deals had Corporate VCs. They hit a five quarter high in California. And yet! Those numbers undercount how much corporations are actually investing in startups. Those numbers only include deals by actual corporate venture capital arms. Add to it, investments by corporations generally-- like Apple’s surprise $1 billion investment in Didi-- and the picture looks like this: 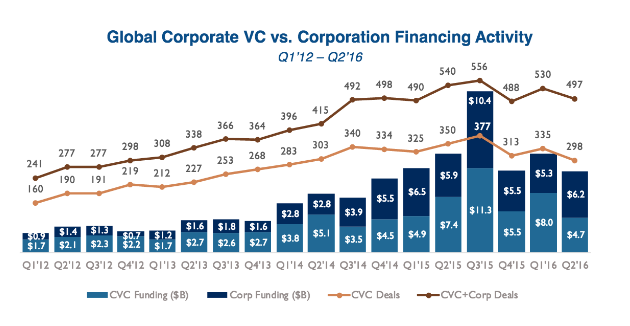 Look, I get how much cash matters to a startup. Cash is lifeblood. Cash is king. Cash is time.