When I first moved here, startups buying other startups was frowned upon.

It was something that failing or stalling startups tended to do to consolidate cash or build critical customer or user mass. Why? Because without a public stock they are messy. They take longer to negotiate. And they’re distracting.

But in the early 2000s we saw a flood of them, most of them falling into the bucket of “acqui-hire.” They were handy ways to buy a cool product that likely didn’t have a stand alone future, or pick up a top engineering team.

Pre-IPO and before it’s mega-deal phase was kicked off by Instagram, Facebook was one of the few tech leaders aggressive with acquihires-- and early on succeeded in making them work by killing the product, and reassigning the team to where big Facebook most needed them. From a piece I wrote on this back in 2012:

Facebook has quietly pulled off something remarkable: They have a strong track record of acquisitions and acqui-hires actually working…

...Here are some examples:

Of course there is a commonality with all these example: The people did well. Post acquisition, the individual talent made huge impacts on Facebook's preexisting core product. They were melded into The Borg.

Facebook acquired 29 companies before it went public. As tends to happen, the top private company in the ecosystem sets the tone. True to form, in attempting to compete with Facebook, Twitter acquired 31 companies before going public. Zynga and Groupon too went on acquisition sprees.

Acqui-hires flared up in part because Facebook made it look good, but also because seed funding surged, the cost of starting businesses plummeted, incubators and accelerators spawned like salmon and starting a company was basically way too easy, and tied up a lot of talent.

We’ve already seen them slow when it comes to mega tech buyers like Yahoo, Google, Microsoft and others. And CB Insights now reports that they’ve slowed among private companies too. 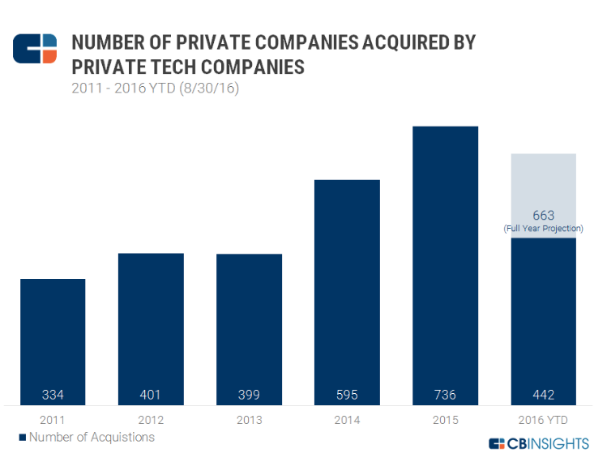 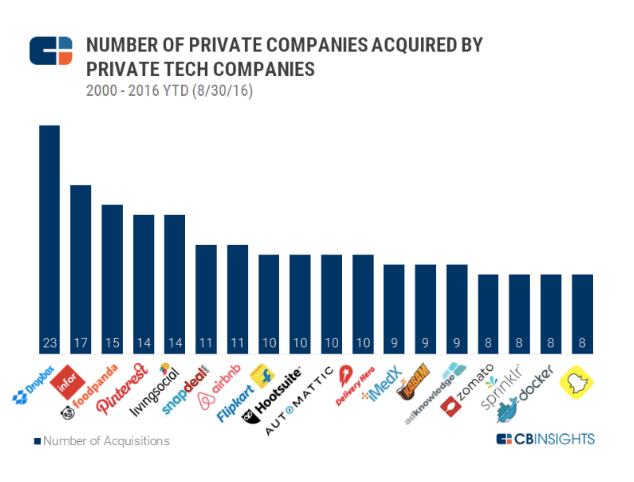 Dropbox, foodpanda, Pinterest, livingsocial, flipkart… notice anything? This in addition to the aforementioned Twitter, Groupon, and Zynga. A bunch of unicorns (and decacorns) who are struggling to grow into their one-time promise and valuations. Dropbox’s challenges have been well documented. Foodpanda is shedding its operations in countries like Indonesia, amid Rocket Internet’s broader struggles. I’ve described Pinterest as a “private Twitter.” LivingSocial… well, as the no. 2 to Groupon, it’s not surprisingly continued to struggle. Flipkart has been one of the very hottest Internet startups in India… but it too is struggling.

Ok, I’ll grant you non-struggling Airbnb is in that mix too. But I consider them the exception that proves the rule.

You know what company has utterly steered clear of acquisitions until one it made recently? Uber.

Like most things in the startup world, you can’t assume all private-to-private deals are a bad idea, nor can you assume they are all good. But the world seems to have realized that they are distracting, they always cost more (in real dollars and other “currencies” like time, staff, and distraction) than you think. The engineers you acquire as a result of the deal frequently go into “vacation” mode, particularly if you are a large public company. One-off products-- even popular ones like Dropbox’s Mailbox-- frequently don’t wind up being quite as good of a fit as if you’d come up with it out of your own product road map.

And there’s another huge cost if you are a pre-IPO company. You wind up with a ton of people owning little slivers of your company… plus all the randos who have ever backed them.