With a rumored $100m round, Postmates confounds the concern trolls

The Hillary Clinton of the sharing economy.
By Sarah Lacy
Sep 8, 2016 · 9 minutes

As Ezra Klein detailed at length, Clinton is constantly dinged in the media for refusing to play the game, whether that game is male politics as they’ve been established since the beginning of America, or, yunno, holding regular press conferences.

Here in Silicon Valley, Postmates, too, refuses to  play the game. From our previous reporting:

Postmates didn’t conform to the norm; DoorDash did. DoorDash came out of Stanford and was engineering centric. Postmates was started by a German whose LinkedIn account paints him as more of a sales guy, founder, and project manager. DoorDash got the YC seal of approval, followed by the Sequoia seal of approval. Postmates launched unceremoniously at Disrupt.

Valley VCs will back a “technical founder” any day, and the history of the Valley certainly backs that bias up. And yet, even DoorDash’s Tony Xu said at PandoMonthly last year the software was the “easy part” of this business. And much of the tech press simply assumed YC and Sequoia picked right.

“All this Postmates and Shyp stuff happened [in] ’99, with [the failed online delivery startup] Kozmo, [and] it’s the same shit. It’s the same shit. The smart phone helps a little bit. You have more data. But we’ll see. The question for all of those things has to do with core economics that’ll be proven out over time.”

Wow. For Benchmark-- which bet and lost big on WebVan one of the biggest overspenders of the dot com era -- to draw a parallel of that to Postmates or any company by name is damning. And it made major headlines, as you’d expect.

What didn’t make headlines was what two sources subsequently told us: That Gurley privately sat down one-on-one and apologised to Postmates’ CEO Bastian Lehman for how the comments “came across.” You know, the press. Always out to create friction where there isn’t….

Except the other ways, Bill Gurley continually undercuts Postmates in his Twitter feed-- the ultimate “talk your book” feed of any Silicon Valley investor. 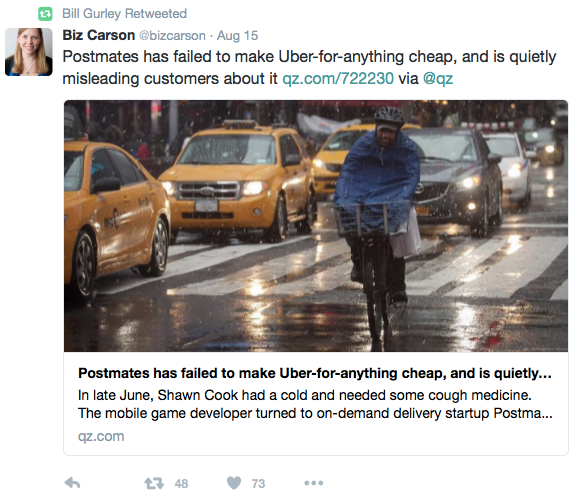 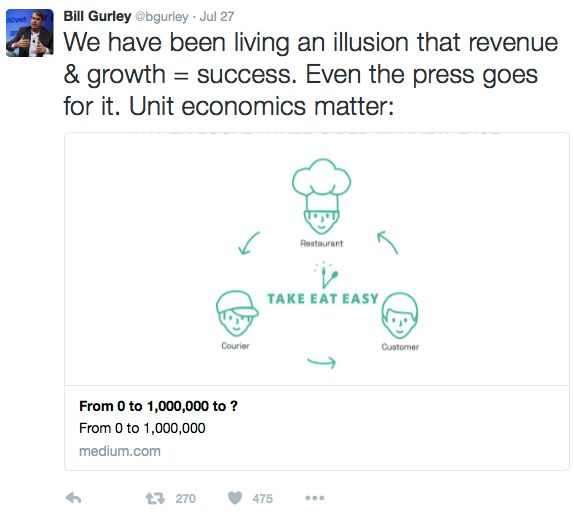 Let’s ignore for a moment that Gurley’s biggest bet Uber isn’t profitable in the US-- as it boasted months ago-- and has burned north of $1.2 billion in the first six months of the year alone.

As The New York Times reported (in a partially subsequently rebutted) report that Lyft got no acquisition offers this summer:

Lyft also struggled to find a buyer because of the challenging economics of the ride-hailing business. Companies like Lyft and Uber typically take 20 percent to 25 percent of the cost of each ride. With Lyft drivers expected to pick up an estimated $2 billion or so in fares this year, that meant Lyft’s annual revenue would be about $400 million, according to a person familiar with the company’s financials.

That $400 million shrinks after marketing costs are factored in. To win loyalty from drivers who can also work for Uber, Lyft also sometimes lets drivers keep that 20 percent to 25 percent of some rides, so the company effectively earns no revenue in those situations. And in some cases, Lyft provides drivers with additional cash incentives simply to get out on the road, adding to its costs.

The economic realities of the industry have set in for a number of ride-hailing players. Sidecar, an app that competed with Uber and Lyft, shut down in December, citing a “significant capital disadvantage” compared with others in the market.

The New York Times was wrong on one thing: Lyft did get offers north of its valuation and it may well regret not taking them. But the broader point on the entire on demand economy’s unit economics stand in particular in light of Bloomberg’s explosive reporting on Uber’s multi-billion annual burn rate.

It’s like Newt Gingrich coughing as he criticized Clinton for coughing.

But that’s how the concern troll has always gone with Postmates: It’s economics don’t work! Postmates supposedly unsustainable user economics are like Hillary Clinton’s cough. Sure, other people cough too. On sheer scale of burn rate, Uber has emphysema. But for some reason it sticks with Postmates. It’s a smaller company with a smaller valuation and fewer superstar investors and refuses to play the game

The argument, originally, let’s recall was that as soon as we’re in a crash-- which the likes of Gurley has said we are in-- Postmates would be first in line to be screwed. It’s same shit as 1999!

And lest you think this is only about Uber, remember Gurley is also an investor in Grubhub. And the pugnacious Grubhub CEO Matt Maloney (who I genuinely respect and think may be one of the only public company CEOs in the “solving dinner” space ever) had this to say of Postmates when we interviewed him at PandoLand. I asked him about rumors that Amazon or Uber may buy Postmates or Doordash:

I think those rumors are probably being started by Postmates themselves. Think about this: Amazon is an incredible company. They are logistically superior to everyone out there. Technically they nail almost everything they do….But one thing I know they will not do is buy a failing business. They will not buy a failing business. There is no chance. There is zero chance Amazon will buy Postmates or Doordash.

Jumping on that bait, when Postmates hired Qatalyst to raise their next round, the tech press assumed or was lead into the belief that the company had to be trying to sell. Because goodness knows-- and Bill Gurley has told us-- the company’s economics simply aren’t defensible.

From ReCode at the time:

Postmates’ hire of Qatalyst comes at a time when investors’ willingness to give rich valuations to fast-growing, unprofitable businesses is decreasing. Postmates is said to be growing quickly, but is not making money. The startup was most recently valued at around $400 million when it raised $80 million in June.

So what then to make of the news that Postmates is reportedly closing in on a huge $100 million or larger round in an era when mega-deals and unicorn rounds have slowed and in particularl the on demand delivery and “solving dinner” space has finally been experiencing casualties?

We’re hearing from sources that Postmates, which is among a few companies that are seen as operating in the difficult on-demand space, is raising at least $100 million in a round led by Founders Fund. Sources stressed that the round has not closed, and that things may change over time.

Despite the challenges of working in an on-demand economy — which can sometimes lead to punishing gross margins and high operational costs — we’ve heard that Postmates is actually in okay shape. Some leaked financial documents earlier obtained by TechCrunch dated last year highlighted gross margins of around 20%. Postmates’ CEO Bastian Lehmann has said before that the company is on track to hit profitability in 2017 — which, at the time we reviewed the leaked documents, we also heard was on track.

It’s worth noting it isn’t an oppressive regime, mutual fund, or foreign investor leading this round… typically the imprimaturs of “dumb money” or “tourist money,” even by Bill Gurley’s own admissions. It’s Founders Fund. (Disclosure: Founders Fund is a Pando investor.)

That’s not a shock if you’re a Pando reader. When we interviewed Founders Fund’s Brian Singerman a few months ago he isolated Postmates as a company he was particularly bullish on. He had this to say:

The contrarian answer to this is, yeah, [Postmates CEO Bastian Lehman] is really not good at playing the Silicon Valley game. That’s not his strength. That’s what I loved about him. Honestly, Postmates is one of the very few really early stage investments I’ve made recently. We did the Postmates Series A early, because Series A is really all about the team and Bastian was so not Valley, and yet so freaking smart on vision and business execution and his cofounder Sean was such a good tech guy that I was like, “This is a team I’m investing in.”

He was so good at actually having such strong business senses, which is so important to us.

When I followed up on what Lehman in particular had done well, Singerman said this:

Like hardcore business optimization, phenomenal business deals, which are big deals but don’t also drive the company under or take the focus away to solve one deal. They’ve got some huge names, and they are doing well with them. Some [companies] do well with big names and it drags them down. Not this company. He’s very sharp about knowing how much resources to put into [each one.] How much to subsidize and when to pull back. He’s very good at optimizing that business

He added this generally about what distinguishes Founders Fund as a firm: “We back the truck up when we have conviction”

It seems the truck at One Letterman Drive is backing up.

And let’s recall Founders Fund has some extra skin in the game in that it’s a major Lyft investor, and Singerman equally said he was still bullish on his investment in Lyft, citing that Uber and Lyft to date were basically commodity businesses. (We’ve argued this point as well: Similar apps, same driver force, mostly cash and subsidies dominates market position to date.)

So even if you dismiss the strengths of Postmates itself, anyone betting against an Uber hegemony benefits by bolstering a Lyft, a Postmates, a Gett, a Juno-- or to that point, a Google, or a Tesla, or an Amazon.

To date Postmates has been comparatively lean in the on demand space given its dominance, having raised “just” $138 million to date. Comparatively DoorDash has raised some $187 million. Both have been seen to be potential takeover bait by Uber, Amazon, or others.

Postmates, at least, it seems isn’t betting on it.