Tinfoil hats and Nazi clowns: Pando goes to (and escapes from) a Donald Trump rally

“Elect a man who cares about you, who loves you!”

Rudy Giuliani is on a small platform on the far end of the arena floor, flanked by a single American flag on his left side only, giving the last desperate cries of what I can only hope is a paid appearance. At least he didn’t have to wear the hat today.

Before me are two pinkly weathered, overweight white men with snowy, close-cropped hair wearing matching shirts featuring Donald Trump standing before his bespoke wall and atop a pile of cash, holding a big gun, next to a flag with an eagle, with a porno approximation of Sarah Palin kneeling at his feet, wearing a tiny red dress and brandishing a handgun next to her catchphrase (“You Betcha”). The shirt says “Let’s Make America Great Again!”, “Bristol Tennessee”, and “Runnin’ the Rage” and also has an homage to the ISIS flag, except this one is on fire and features a man fucking a goat from behind.

I’m not making this up. See for yourself (above).

We’ve been standing in this crowd listening to the murmurs of frothing supporters while observing the shpiels of infant college bros in tightly fit khakis as they search for unregistered voters. The soundtrack of this prelude to a shitshow featured such treats as “Let’s Spend the Night Together” (Rolling Stones and highly sexual), “Born on the Bayou” (“Songwriter John Fogerty set the song in the South, despite neither having lived nor widely traveled there”), and--seriously--opera.

The cognitive dissonance of hearing opera at a societally sanctioned white power rally is making me feel as high.

A boy in a “Hillary Sucks But Not Like Monica” shirt wanders aimlessly by.

I’m at the Donald Trump rally in Asheville, a cesspool of sin and pale blue dot in today’s sea of North Carolina red.

Walking up to the rally, my first thought is that somewhere, a high school creative writing teacher is crying. It’s all too pat. There’s a man in a Trump shirt sporting a globe of tin foil fitted to his exceptionally round head. Area punk kids hold signs up to the side of the venue, only to be met with bibles and confederate paraphernalia pressed against the glass from the inside in response. A legally blind woman attempts to swat down a rebel flag with her cane, only to smack the man holding it in the head instead. There is a clown in a skirt posing with Trump supporters and giving the Nazi salute.

When the clown came into the venue, security required him to remove his red nose.

You cannot write this shit.

Four years ago, I was here covering Mitt “Lemon. Wet. Good.” Romney’s campaign stop in these beautiful mountains. His rally was organized, deliberate in the simple touches that reminded one that they were about to be in presence of a man standing on the doorstep of the American presidency. The line to get in Mitt’s rally wrapped around the block and wound through rows and rows of metal crowd corrals. As you waited to go in, a huge jumbotron cast its gaze over the crowd, playing a succulent mix of Romney propaganda featuring Romney family home movies. The crowd had a noticeable “Sunday best” contingency, families in their Olan Mills fashion bringing their well-scrubbed Presbyterian children to see their respectable candidate.

The police had the protesters waiting across the street.

Not so here at Trump’s rally. Protesters here were right up on the doors. You had to walk a gauntlet of them to enter the venue, a move that felt calculating and hostile. I wanted to bolt immediately. It was so divisive.

Where as Mitt’s rally felt like outreach to drum up new voters, Trump’s feels like a pep rally for people who have a hard time having emotions.

Mitt was charismatic, even in his stilted Stepford kind of way. He had very hairy arms, which were humanizing. The tactical decision to roll up his sleeves seemed wholesome. He played the part, and we did not yet know that was something we should have been grateful for.

Trump plays no such part. In fact, he barely lives up to the show he’s taught us to expect from him.

He doesn’t have to, though. He’s running a well-oiled media machine, a clever piece of technology that’s stuck in a Sisyphean loop of eating shit and shitting it out and eating it again, in perpetuity, forever. It’s compelling and effective. He’s so clearly defined the edges of his character that he can put the whole show on autopilot and it just eats and shits and eats and shits and the crowd chants about a wall and the good ol’ boys “woooooo” and he uses the word “zimaphobia” and no one laughs.

It’s like Disneyworld. People come in with their fantasy of what it’s going to be like and, as long as you approximate what they wish to see, they will have exactly the experience they want. No need to fix the chips in the paint or the smell of that dumpster: the people who want to be there will see what they came to see.

You go to a Trump rally for the experience of a Trump rally, not to see a politician. As expected, protesters were kicked out, spat upon, some were assaulted. There was lots of yelling. Someone passed out. The whole thing was all tempers and rebel flags and long lines at the concession stand.

The creeping anxiety of being unwelcome had my shoulders inching ever closer to my ears, the bony ends of my collarbones drawn up with the self-protective instincts of a dismayed turtle. With the final scream of “MAKE AMERICA GREAT AGAIN” I bounced. The wide hallways, echoing with the exuberant irony of the Rolling Stone’s “You Can’t Always Get What You Want” tapered into a bottleneck of crowds leaking through the few sanctioned doors into a wall of desperate protesters. Following my companion for the event at close remove, we made it through the glass encasement of the concession stand fishbowl and into the anti-Trump contingency, my people in name in deed but, today at least, not in action. I threw up the same stilted peace signs I used to beg mercy through the entryway gauntlet and cast down my gaze, following the cheez whiz orange barriers that bisected the sea of resistance. There appeared to be no delineation between the sides, just shouting.

The crowds was messy and encompassing.

Were I a better journalist, who perhaps passed as more of a neutral observer and less of an outsider here today, I imagine I would have had the stamina to swim in this sea of hatred, but, as it happens, I wasn't trying to get fucking assaulted today.

So we bolted, getting just enough distance from the swarm to see Trump and his entourage peel out from the alley adjacent to the epicenter of today’s diarrheal pancake. There were too many angry men with their comically hostile stares, comical only in their over-the-top aggression and only worth a laugh at a distance of safe reprieve. I was so, so glad I wasn’t alone in there. We watched Trump, who was riding shotgun, give an animatronic wave as the secret service caravan fled the scene of his tactical provocation.

Alleyways turned into brick and mortar mazes as we wound away from the platonic ideal of American’s sphincter. We fell into a disgusted silence disguised as thoughtful contemplation. There was so much to say, what with all of that xenophobia writ large, and it manifested as an intense need for psychic excoriation. In such a state, we might as well carry on in silence with the weight of our respective want of absolution for crimes of observation. I paced behind him, on streets that once felt like ours but now teemed with hostility pleading for an outlet.

Walking through a nondescript parking lot, we slipped through a chainlink gate at the back of a parking lot, finding ourselves immediately in a hallway of hot garbage fumes lit by bile yellow lightbulbs as bare as naked greed. It smelled like someone puked on a tire pyre.

The corridor was lined with trash cans, the fetid detritus of consumables abandoned to rot alongside the memory of their plastic encasements, all crammed over and under and in between A/C units that belched oven-hot air into the trapped atmosphere of this netherworld.

Running down the middle of the floor was a sea of literal garbage juice, mustard-colored and frothy. There was a zippered net at the back of this dumpster hall, but the zipper was open and we went through. Here in the back, among the fermented garbage and exhaust, was a pigeon trying desperately to escape Trashland.

Dear trash pigeon, I want you to know that I see your struggle. I have watched your frantic flights towards the light. You look so tired and in need of help and yet I know I cannot help you. You are angry. I know that you feel you are trapped here in this hot seam of restaurant waste and human piss but I come bearing good tidings: you are not trapped. No, dear pigeon, this need not be your fate. There is a way out.

You just need to find it. 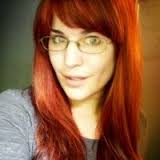 An erudite hussy, owner of a filthy mouth, master of scientific pedantry, and woman of letters.