Twitter is proving its unique indispensability at the same time it’s stock price craters because no one wants it. Has tech ever seen this before?
By Sarah Lacy
Oct 11, 2016 · 7 minutes

For at least a year now, it’s been pretty easy to call Twitter the new Yahoo.

A company that was core to the development and evolution of the consumer Internet, one beloved by many Valley insiders, and still a valuable asset. But also a perennial number two to a far stronger player (Google, for Yahoo; Facebook, for Twitter). Both too were/are valuable assets trapped inside overpriced valuations making an acquisition impossible until substantially more value was/is eroded and even then, the risk is that so much damage is done that it’s not worth an even reduced price.

And, of course, both hoped a returning founder could resurrect the company’s glory days. Just as Jerry Yang was stunned when investors ran out of patience with his plans for Yahoo after a mere 100 days back in the job, now poor Jack Dorsey has reportedly lost control to impatient investors, board members and co-founders who just want this thing sold already.

Back in 2008, I wrote about Yang: What did you expect? You came in after a long, slow decline was already underway. Did you think public market investors were going to be patient?

You could shout that even louder at Dorsey. He’s had even longer and has made smaller moves. And don’t forget: Dorsey started his tenure by throwing former CEO Dick Costolo under the bus and tanking Twitter’s stock. You only do that if you have a foolproof plan to rescue the company. Dorsey-- as has been made clear-- did not have a working plan A, let alone a plan B.

Honestly: What did he expect? He’s had his shot. A shot he probably shouldn’t have been given, considering he refused to give up his concurrent role as CEO of Square.

But after the last week, the morass of Twitter has become something different. The Yahoo analogy no longer quite fits.

This weekend I was absolutely glued to Twitter in a way I haven’t been in years, as we continue to watch the sad degradation of civic discourse and what used to be a functioning republic where presidential candidates didn’t boast of sexual assault and vow to jail political opponents. I was with my kids all weekend so couldn’t possibly have TV or radio on in the house, given words now used in this election. Usually I put my phone away on the weekends, but every time they ran off to play or got distracted I was on my phone-- on Twitter-- like a junky.

I know Facebook -- particularly Facebook Live-- has played an increasingly huge role in this election, but not for me. My Facebook feed is all pictures of my kids and Pando articles. Twitter is where my political rage is contained and pictures of my kids almost never appear. I have firewalled this ugly, horrible, life-consuming election onto one social network.

Compare my Instagram feed and my Twitter feed over the weekend, and you’ll see two wildly different realities. One with kids in knitted viking hats making necklaces and playing all weekend, and one in horror at how 40% of our country simply does not think women deserve basic rights over their own bodies, their careers, their self-respect.

Neither is fake. One is what I was doing all weekend, and one was what I was agonizing about. And the products are suited to each. Facebook hasn’t been horrible for me this election-- even though I’m friends with more people on Facebook who are Trump supporters, than I am on Twitter. Because of Facebook’s algorithm. I don’t get into politics, and I mostly don’t see politics in my feed.

I need Twitter. I need the rawness, the outlet, the place to scream my outrage and know my outrage is shared. I need a place where it is contained.

And, it seems I am not alone.

Fred Wilson-- an original Twitter investor-- said what many felt by the end of the weekend:

Last night was Twitter at its finest. Anyone who says it is past its prime, irrelevant, and failing is out of their mind.

Yes. He is absolutely right. And yet, at the same moment Twitter was proving to everyone just how valuable it is, it’s stock was tanking because no one wants to own it.

In that, it’s very unlike Yahoo. Yahoo’s decline was largely due to age and failing to make major acquisitions at the right time that could have fundamentally changed its own history and the history of the Web. Google and Facebook were just two companies Yahoo could have owned but balked at “outrageous” prices that are laughable in hindsight. Yahoo’s valuation trap was because that ailing and aging business was bolted onto accidental and massive growing assets: Yahoo Japan and Alibaba. Two assets that it took four CEOs to pull apart from the core business.

Twitter is very different. It is aging, yes. In a Snapchat world it looks old, and although it made smart acquisitions like Vine and Periscope, it did little with them, compared to, say, how much stronger even a pre-IPO Facebook made Instagram. Twitter has innovated little, refused to combat bullying citing the glory days of Twitter’s role in Arab Spring, and refused to give users basic features they’ve asked for for years. Yunno, like the ability to edit a damn Tweet once Twitter’s over-zealous autocorrect goes rogue and utterly twists the meaning of your 140 characters.

Nevertheless, in terms of global impact, we are currently witnessing Peak Twitter. Enabling the rise of Donald Trump is a bigger thing than Twitter has ever done before, horrible or not. And no one can stop watching. The Wall Street Journal reported today that Twitter Streaming’s audience grew during the Sunday debate as the TV audience slumped. It launched memes like Ken Bone, Tweet me your first assault, Muslims Report Stuff, and Pussy Grabs Back.

And yet, as Twitter’s importance in the world was growing, so too was its stock price slumping by billions of dollars in market cap. This is its stock chart in the last five days-- the same period in which Twitter became more indispensable: 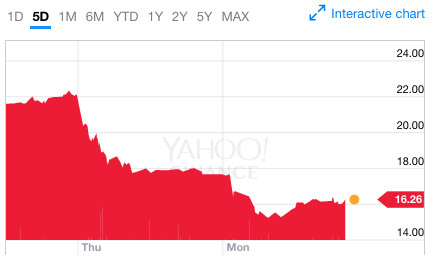 So while Fred Wilson is right, the fact that no one wants to own Twitter amid its peak moment of the world seeing exactly what it does that is unlike anything else, points to the fundamental brokenness of the company. It isn’t a Web 1.0 giant slowing fading away, still used by aging surfers who don’t realize things like Gmail and Quora and other chat modules exist. It is a company on the lips of every pundit and every reporter every day who is still cannot grow users.

Give Twitter and Dorsey at least credit for one thing: It’s flailing in a way I’ve never seen a major Internet property flail before.

Twitter has always described its challenge as a struggle to go mainstream. But if you are the platform of choice of a demagogue who is supported by uneducated masses…. If you are on cable news every moment of everyday… you are mainstream. The user growth isn’t a problem of taking a product “mainstream.” It’s a problem of people simply not wanting to use the platform, because they either “don’t get it” or find it toxic.

We didn’t even write about those rumors because what more can we say than we had already? Since Dorsey took over and acquisition rumors flew, all of our sources and common sense have told us it’s too expensive to buy given its lack of growth. We didn’t believe Google was serious. We didn’t believe Salesforce would take on the toxicity. We were right.

And so, we come back to the biggest reason that Twitter will keep getting compared to Yahoo, even though it’s decline is coinciding with its rise in awareness and usefulness: There simply doesn’t seem a near term answer to Twitter’s end game. Too vital-- and too big-- to fail. Too overpriced to sell. A looking glass of our political soul, too toxic to look away from, too toxic to be bought by a company like Salesforce.com who’d like it to be a customer service and marketing tool. One that can’t crack down on bullying, when its relevance is the platform of choice of the biggest bully on the world’s stage right now. The site that is neither fully destroyed nor saved by all the attention it’s gained from Donald Trump and this election.

This is Twitter. This is plan B. You are looking at it.