Twitter and the GOP: Willing victims of the same orange arsonist

This vast organization in in total disarray. It’s lame duck leader finds himself shackled to the billionaire fascist he formally endorsed. The organization is watching its own numbers plummet, even as its endorsee becomes ever more high profile.

If you answered “what is the GOP?” give yourself a point.

If you answered “what is Twitter?” give yourself a point.

And if you correctly identified Donald Trump as the billionaire fascist helping to destroy both of those organizations, award yourself a bonus point.

Facetious gameshow ledes aside, the overlap between the fates of Twitter and the GOP really is remarkable. The GOP and RNC chair Reince Priebus chose to support and endorse the rise of Donald Trump. despite all evidence that the result would be disaster. Sure enough, as Trump dominates every news cycle and has become arguably the most famous man in the world, the GOP’s numbers are tanking. Even now, as the flames lap their collective ankles, Priebus and his party refuse to formally unendorse Trump.

Now consider Twitter and Jack Dorsey. For months, Twitter has embraced Donald Trump -- verifying him, promoting him and refusing to suspend or censor him, even when he posts threats and abuse that would get anyone else on the planet booted from the platform. Meantime, the company has touted the traffic and attention bump provided by this election (read: Trump’s dangerous rhetoric, and his rivals responding to it) as evidence of the platform’s relevance and importance. In other words, while Dorsey insists he wants to rid Twitter of abuse and bullying, he’s appointed Donald Trump as his de facto brand ambassador.  And how's that working out? 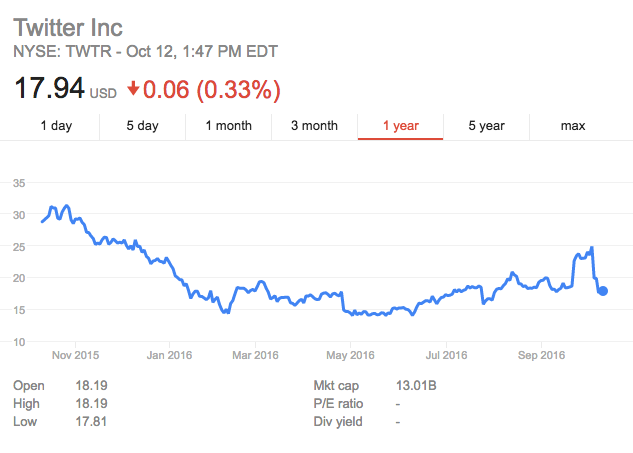 Twitter has become a stagnant cesspool and nobody, except perhaps Salesforce, wants to deal with cleaning up its shit. (And even Benioff has been pretty candid that he’d want to turn the whole thing into a customer service tool if he took over.)

Now. A couple of caveats to the comparison. Obviously the GOP and Priebus have done far more to endorse Trump than have Dorsey and Twitter. It’s not entirely fair to blame both organizations equally. But then again, Reince Priebus has also never appeared on stage with a tshirt urging us to “#staywoke.” Whatever shortfall Dorsey might have in direct culpability for Trump is more than compensated for by his abject hypocrisy.

And when it comes to the two organizations’ excuse for allowing themselves to continue being destroyed by Trump: They’re entirely in lockstep. We can’t dump, or even un-verify/endorse, someone who has been nominated by a major party as their presidential candidate. Trump may be awful, he may be killing us, but we have to treat him with kid gloves.

The subtext: We’re scared that if we dump Trump, he’ll say mean things about us.