Uber apparently wants some rivals to believe an IPO is coming soon. But why?

About a week ago, I started hearing rumors that, contrary to what I’ve been arguing for the better part of a year, Uber was planning to go public in the first half of 2017.

That the company was talking to bankers now.

The sources were highly placed, and absolutely confident this was the case. But the sources weren’t at Uber. They were part of a raft of potential Uber competitors: A long list which spans Lyft, ridesharing companies around the world (minus China), automakers, Apple, Tesla, and Google, and who knows? Maybe one day Facebook and Amazon. Facebook is already building planes and satellites and Amazon is a master of logistics.

Let me be clear up front: The point of this story isn’t to start an “UBER IS GOING PUBLIC!” frenzy or even predict that will happen. In fact, I’ve spoken with other sources who would all but certainly know if Uber was talking to bankers now, and they pooh-poohed the rumors.

The interesting thing to think about is why Uber or someone close to Uber may be actively floating IPO rumors to potential competitors. Uber-- more than any company I’ve encountered in nearly twenty years as a business reporter-- uses lies and rumors as a competitive weapon. As Paul has written, it’s the Donald Trump of companies.

My guess-- and let me be clear, it’s an informed guess-- is that Uber isn’t going public that soon. When it comes to ridesharing, I don’t believe anything until I look a founder, manager, or investor in the eye and see the words come out of their mouths. And even then, if those people work for Uber, I don’t necessarily believe it.

But I can think of a few reasons Uber might want potential competitors to think an IPO is coming:

A publicly-traded Uber would definitely change the market dynamic. But without seeing the numbers, it’s hard to know how. Again, Uber is a master of misinformation. Many reporters spent much of the year believing Uber had a solid, profitable core business in the United States before Bloomberg broke that it was burning billions in capital a year. It spent a year insisting it was succeeding in China, that China would be its most successful market, until it abruptly gave up in China.

If Uber is indeed “crushing it”, does have a strong underlying business model, and is maturing as a company, a public Uber will be far more formidable. It will have greater access to funds-- particularly debt-- and this is a commodity business. Cash is all that matters. Being public has made several founder-CEOs who’ve dominated their boards that much better, because they’ve been pushed in ways they weren’t as private companies. Perhaps Travis Kalanick-- like Marc Benioff and Mark Zuckerberg-- grows into a Jeff Bezos or a Larry Ellison in the role.

And then there’s the flipside of that argument: That Uber hasn’t yet proven its core business, international is a mess, its numbers are worse than anyone is expecting, and being public limits the company’s freedom.

When you are a private company doing well, you can ignore even an investor who has a board seat and owns 20% of your company. When you are public, you have to acknowledge an activist shareholder with even a comparatively miniscule holding.

And Uber has painted itself into a corner valuation-wise. It’s all but certain an IPO with a limited float of stock can be well enough engineered by bankers to be successful. But will they be able to justify a high enough price that it’s current near-$70 billion valuation increases more?

Look at Twitter: Very different company than Uber, admittedly. But the biggest problem with Twitter-- most of its life as a public company-- has been a valuation that’s simply too high given its size, business, and growth.

Uber could face a backlash from a lot of factors as a public company: From the possibly “criminal” tactics it’s used to silence enemies, it’s lousy track record on respecting women, one of hundreds of lawsuits it faces including the most recent one in New York that gives drivers employee rights and strikes at the core of its business model, or from companies like Google and Tesla aggressively stepping up competition.

Kalanick has been clear in two things: He doesn’t feel he should answer or cave to anyone, and that’s a big reason he’s vowed to put off an IPO as long as possible.

For what it’s worth, I think there’s a strong argument that Uber should do exactly what it’s whispering to potential competitors it will do: Go public in early 2017. The valuation will be hard to attain, but it’s one of the biggest consumer brands to come out of the mobile-first era and it can spin the stake in Didi Chuxing as a potential Alibaba-like bonus.

The bigger reason why: If Uber is going to go public at this kind of valuation, it absolutely must do that while it’s dominating a market. And now that it’s settled the money losing suicide mission in China-- with potential upside-- all it’s got in a competitor right now is Lyft. Nothing excites growth investors like a huge market, that still has huge future potential, and a company dominating it.

Fast forward a few years and this market changes completely with deeper pocketed competitors, some of whom have technology, mapping and hardware advantages over Uber. The closer we get to self-driving cars, the more uncertainty around Uber’s hold on this market.

Inflated valuations like Uber’s are dependent on growth, a huge market, and dominance. You’ve got those and you can spin a story investors will believe. Even Facebook hit a speed bump because it arguably waited too long-- until mobile was a major inflection point-- to go public. It was dominating an increasingly stale market, and there was uncertainty about the future.

Facebook weathered that, because it spent some $20 billion in well-timed and well-executed acquisitions. Facebook was lucky, arguably, that it’s potential competitive threats were startups, not larger companies with deeper pockets, like Uber potentially faces in a self-driving car era.

Right now, Uber controls how much of this market it owns by how much it spends in subsidies. In five years, there’s a lot outside Uber’s control.

Looking at The Atlantic’s fascinating “View from the Valley” makes my case further. The Atlantic polls more than 50 top tech thinkers, investors and innovators about the state of things. (Read the whole thing for juicy topics like which Peter Thiel scandal is considered the most troubling…)

Consider the following. Uber is not considered the most exciting startup: 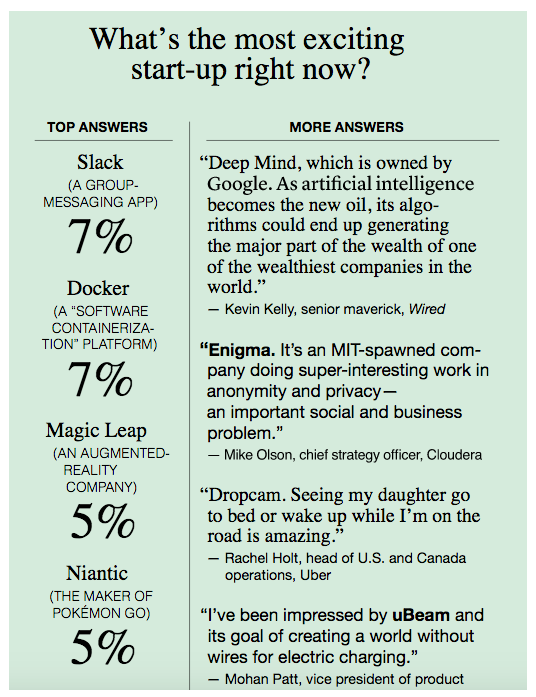 Nor is Uber considered prestigious to work at: 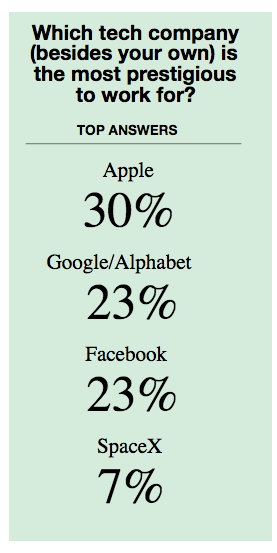 I cannot remember a time when the highest valued private company in the Valley wouldn’t have ranked in any of those categories.

And this DESPITE the fact that ridesharing and Uber in particular are considered the tech company that has most improved quality of life-- by a wide margin. 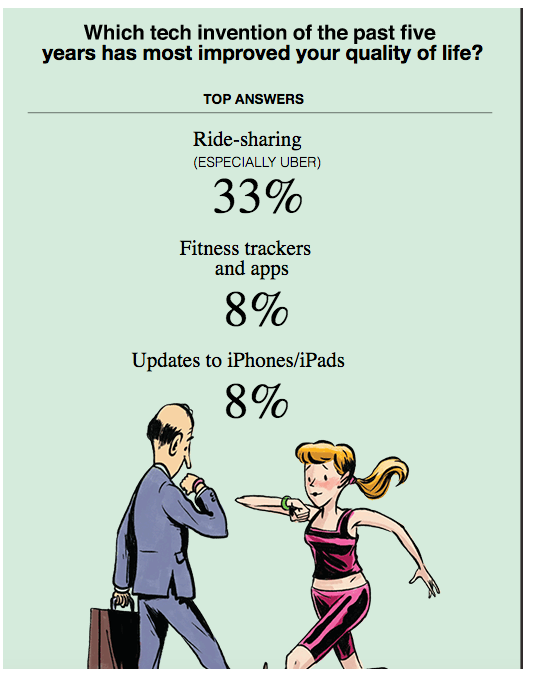 Reminder: These are top executives and investors in the Valley. They consider Uber the most life changing innovation in five years but don’t want the job running it or consider the company prestigious to work for. They love Uber the product; seem to ignore or disdain Uber the company. Something that shouldn’t shock a single person who has read Pando for the last few years. Turning down Uber has become a meme for female engineers, and it’s head of HR defected last summer for… Twitter. 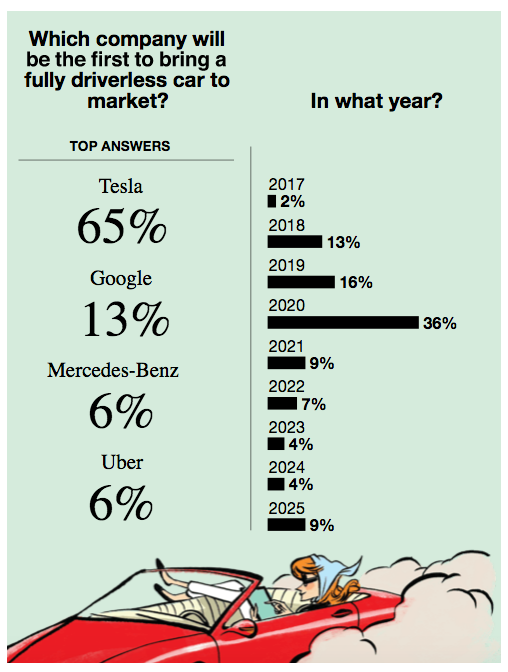 Respondents expect fully-autonomous cars on the market within four years. And only 6% think Uber is the company to do it.

Ouch. So much for Uber’s publicity stunt in Philadelphia last month.