The “Uber of $$$”: Why on demand funding is back up, negative gross margins be damned!

God damn this venture market refusing to do what well-placed VCs insist it must!

So: The on demand space. Yunno, the whole “it’s an Uber but for…” meme that’s dominated pitch meetings for the last few years. The most overheated segment of the market that every VC from Fred Wilson to Bill Gurley has been arguing is just trading VC dollars for gross negative margins and our (likely) future President Hillary Clinton has expressed concerns about…. That thing? The thing we were all pretty convinced was the most “dot com” and “1999” part of this whole unicorn wave?

Yes it is also the segment of the market that I, too, have argued is mostly unsustainable because it’s predicated on an “Uber of X” business model when the reality is almost none of these businesses have the broad appeal of ridesharing or the frequency of purchase.

So how is the great collapse of on demand coming?

Well, it’s not. Back in April, I debunked press reports stringing together a few poorly funded examples of companies going under and trying to make it a trend. Now, we get more evidence from CB Insights:

On-demand investment accelerated in 2015, when deal count jumped a whopping 61% and dollar funding more than doubled. The frenzy has cooled this year to some extent, and in the first three quarters of 2016 investors made 224 on-demand deals worth $12.2B in aggregate. At the current run-rate, full-year 2016 is on track to see roughly 300 deals and investment of $16.3B. These totals represent lower figures than last year’s, but are still significantly higher than funding levels in 2014. In fact, in 2016 to date we’ve already seen about as many funding rounds as on-demand companies raised in all of 2014.

Three hundred deals and $16 billion! The content business should “crash” so hard...

Prefer it in graph form? 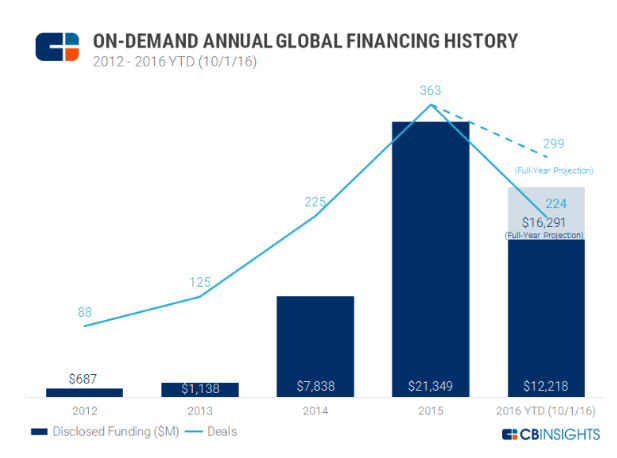 What the actual fuck?

What’s mystifying is there are signs of weakness here and there. Consider the space I consider the weakest: The “what’s for dinner” market. Market leader Postmates has reportedly struggled to close a rumored $100 million round, and reportedly had challenges when it tested the markets for a buyer. If Postmates is in trouble, DoorDash is really in trouble. Bloomberg has reported similarly that Square tried and failed to sell off its Caviar food delivery business, and Munchery is struggling to bring in a new CEO and struggling to raise new funding. And internationally, the category has been suffering too.

But meantime, BlueApron still insists it’s doing great and may go public, and we see new deals in that space despite companies that don’t seem remotely differentiated. This is simply not a market where three data points-- or even ten data points-- seem to illustrate a trend.

Back in early 2015, I wrote that the bulk of the sharing economy was really just Uber, and to a lesser extent Lyft and Airbnb. I illustrated it with this dramatic chart, also courtesy of CB Insights: 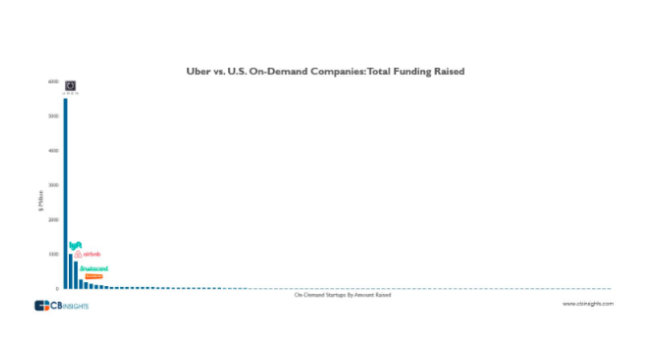 And certainly in 2016 Uber, Didi Chuxing, and Airbnb, have continued to dominate funding, particularly in the second quarter when Uber closed $3.5 billion in Saudi cash and Didi closed its $1 billion Apple deal.

But since I wrote that piece back in mid-2015, funding of other on demand companies has picked up. Even though companies like HomeJoy were already starting to look like cautionary tales.

Check out this graph. Sure the light blue is a big chunk of the market, but it’s not all of it: 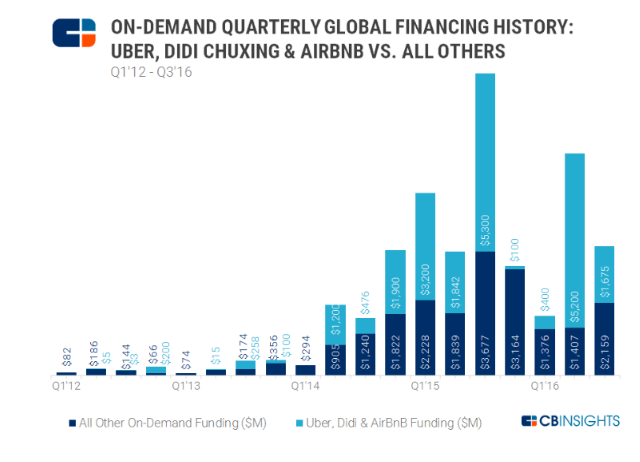 So the catalyst keeping this market everyone wants to crash alive isn’t merely just cash flooding to the big boys anymore.

Here’s one explanation to why this market that everyone seems to agree is over funded and unsustainable won’t contract that makes slightly more sense: A lot of it is not happening here.

Remember when we said that corporate cash and international cash were behind a lot of the continuation of the mega-round and unicorn insanity? Well, a lot of the on demand deals are not happening in the US. Again from CB Insights:

Deal share to China increased in 2014 and 2015 but has thus far fallen back in 2016. Deal share to the rest of the world has also increased, while the UK’s share declined since 2012. Other countries’ deal share hit a new high at 28% in 2016 YTD, boosted by a number of deals in France, Spain, Germany, Canada, South Korea, and elsewhere.

Those of us who were around in the late 1990s remember when overheated Indian and Chinese companies crashed after the dot com era. The contraction started in the US, and rippled more slowly to other markets. Indeed, Chamath Palihapitiya for one, has said we’ll see a major shakeout of Indian startups in the next 18 months.

That may well be the case, but this time, the dynamics are different than they were in the dot com boom. Emerging markets are bigger with larger middle classes than they were nearly 20 years ago, and there are generations of successful entrepreneurs and tech executives in more mature markets like China. There is also shit loads of international cash that has tried to wedge into US venture funds and partially failed.

Those burgeoning, smart-phone enabled local audiences are part of the reason that companies like Uber and WeWork are getting such large valuations; the global opportunity is thought to be so great. But unlike past eras of Silicon Valley, international startups are competing with Valley giants at the same time they are building their core businesses. Valley companies have to compete now if they want China, because Chinese entrepreneurs (and cash) won’t simply wait for you to get to them.

So while a big chunk of on demand cash may not be coming to companies based here-- it is absolutely making life harder for companies founded here.

The biggest example is the biggest company in the space: Uber. So far, it’s mostly had its ass handed to it internationally, because several international markets-- most notably China-- are no brainers to become the largest ridesharing markets in the world. Given that, Didi starts to look like a steal at a mere $35 billion in valuation, next to Uber’s -- what is it now? -- $70 billion. Uber is turning its focus to Latin America and still pretending it’s serious about messy and fragmented South East Asia, which I predict Grab wins and Didi ultimately acquires. Uber is still faces legal challenges in much of Europe and is still spending some $1 billion a year on India. I think Uber still has decent odds of winning that market through sheer force of capital, but right now, Ola is leading.

None of that is anywhere close to the world domination Uber’s investors anticipated.

Silicon Valley VCs have long bitched about the hundreds of “copycats” funded in the US who may not challenge a clear number one player, but certainly syphon off employees, customers, capital, and make life harder for the number one player. Now there’s a whole world-- and a near limitless trove of international capital-- playing that game.