I’ve been writing about corporate VCs a lot in the last few years and most of you simply don’t give a fuck.

Also this: A lot of people have been burned by corporate VCs in the past. A few years ago Fred Wilson said it about as plainly as you could in a PandoMonthly:

Wilson -- a man known for his strong opinions -- was at his most rabid on the topic of corporate VCs. "I am never, ever, ever, ever, ever going to do that again," he said. Adding in one more "ever!" just in case we didn't quite get it. He explains why in the [video], and notes that Intel Capital and Google Ventures might be two exceptions to his rule. But those two aside, Wilson says it's repeatedly gone so badly in the past that it might be the one thing that makes him leave a board in the future.

After that 2013 interview, Wilson took issue with that clip emphasizing that groups like Google Ventures act like investment-driven VCs and shouldn’t be lumped into the same bucket as others. He said he regretted being so harsh and apologized. And then he doubled down again at a CB Insights conference earlier this year, where he referred to corporate VCs as “the devil.”

Ah, yes, the gold standard of modern corporate venture capital: Google Ventures, or Alphabet as its now called. The company with so much capital its corporate VC group can be siloed off and not have any of the conflicts that people like Wilson have been burned by in the past. In many ways, it was Google’s modernization of a corporate venture capital unit-- siloing it, bringing in former entrepreneurs to run it versus mid-level execs, getting in competitive deals like Uber, and incentivizing partners on returns not synergies-- that made CVCs look sexy again.

How’d that work? Well most of Google Ventures superstar “partners” have already left a group that’s been in near constant turmoil, it’s bet on Uber has created all sorts of awkwardness now that Google is directly competing with Uber, and its investors have gone to bizarre lengths to throw founders under the bus.

None of that is normal venture capital at work, folks. Partners make a commitment for at least one full fund, and if they go after that they tend to slowly fade away, frequently still helping with companies during a long transition. Traditional VCs so assiduously avoid conflicts that Andreessen Horowitz famously couldn’t invest in Instagram beyond a seed deal because it pivoted into something that competed with another portfolio company, and VCs’ almost sycophantic loyalty to founders-- whether they’ve won or lost-- makes Kellyanne Conway look critical of Trump’s debate performance last night. No VC will criticize Uber’s tactics even when a judge declared its actions against a legal opponent to be borderline “criminal.” And while Google Ventures threw Secret’s David Byttow under the bus, Index’s Danny Rimer invested again in his next venture.

So don’t be deluded: Corporate venture capital is simply a different game, with different norms and different incentives, no matter how many “partners” at these groups will tell you otherwise.

And that’s important to know because corporate venture capital makes up a huge percentage of “venture capital” deals happening right now, it has only been increasing as the market has “corrected” and in markets like China, corporate VCs control even more of what gets funded and at what price.

A chart from Pitchbook: 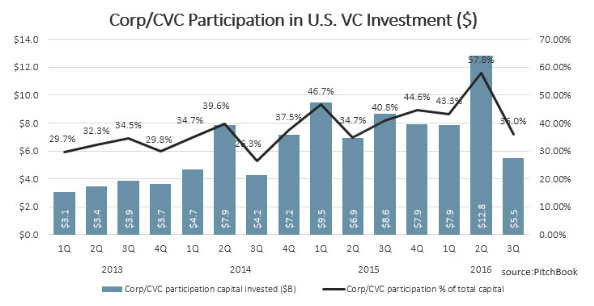 That’s right: Corporate VCs invested nearly 60% of the capital in the second quarter. As we’ve written: The rise of corporate VCs and the rise of international cash are the two biggest reasons this unicorn frenzy hasn’t really corrected the way most traditional VCs had hoped. A lot of hedge funds and mutual funds have pulled back.

But international cash and corporate VCs haven’t. And that was never on more display than in the second quarter of 2016 when Apple made a very uncharacteristic $1 billion investment into Didi Chuxing and Uber raised a record breaking $3.5 billion from the Saudi Government.

In some ways, this trend isn’t all bad, as long as you acknowledge taking money from a corporate VC has all kinds of risks entrepreneurs aren’t used to: Namely that the “partner” who invested in you may just leave in a few years or the sole “LP” in that “fund” may wind up becoming your largest competitor.

Some of the good: Shitloads more money, sometimes price-insensitive. Yes that can be bad for a macro ecosystem, and it’s not great for traditional VCs, but founders will never wring their hands about more money coming into the ecosystem. Cash is time and that’s life when it comes to startups. As much as those not raising capital like to say “the best companies will always get funded in any market” there are points on the journey where even the best companies don’t look so hot. The ugly truth of most startups story: Sometimes, you need that dumb money round to keep at it. Even Yuri Milner was considered “tourist money” back when he did that $15 billion Facebook deal that forever changed how late stage capital works in the Valley. LINK

Also good: Corporate VCs tend to invest heavily in different sectors. Intel and Qualcomm for instance have been some of the largest investors in areas like hardware and Internet of Things -- spaces where VCs’ appetites wax and wane. And-- as we’ve written before-- hands down the biggest investor in content companies are old media companies. Even the best content companies like BuzzFeed, Vox, Vice, Refinery29, Bustle and others.

That’s awkward… and may threaten the independence and future viability of these content brands. But at least there is someone who wants to write the mostly woeful content industry checks.

But startups-- and their traditional VCs-- should be wary, not just of taking a corporation’s money themselves, but of the larger trend. Increasingly, we live in an age of tech robber barons we have never seen the likes of before. Some of the biggest challenges Apple and Google face is how to spend all their cash. Meantime they-- and Facebook-- are vying to see who can become the first $1 trillion company. Apple, Google, Facebook, and Amazon show no signs of “fading” the way other tech giants have. And their ambition to gobble up or aggressively go after new markets no matter the cost is astounding, whether it’s Facebook’s left field $2 billion acquisition of Oculus Rift before it even had a product, or Google’s ambitions in Fiber, flight and transportation, or Amazon’s poetic launching of brick-and-mortar stores long after it was blamed for their demise.

If we had the same level of paranoia today we did of Microsoft back then, we wouldn’t have many startups because they’d all have to stay away from pretty much anything people, things, and data, and pretty much any ad based business since Google and Facebook are on pace to gobble up 85% of the display ad market.

It’s telling that the highest valued and most funded company in Silicon Valley history-- Uber-- is anticipated to be the underdog in the next wave of ridesharing next to Tesla, Google and (maybe) Apple. Should Uber push more into general logistics? Then, add Amazon into that equation.

That’s just reality of the competitive landscape a few decades into the golden transformative age of the Internet and mobile devices. Startups can’t escape that reality. But what they can do, is not opt into those same companies funding their very earliest days.

What happens when the Googles, Apples, Facebooks, Amazons, Baidus, Tencents, and Alibabas of the world not only control a startup’s fate when it’s lucky enough to create a successful product, but those companies also control what gets developed to begin with?

Or, say, control 50% of the funding market that determines that, meanwhile permanently altering the economic realities of traditional VCs now competing with them?

Of course, VCs have convinced themselves that they’ve seen this movie before. And that as soon as interest rates creep up and the tech market corrects (is that ever happening, btw, guys?) corporate VCs will dry up just as they did in the dot com bubble.

Maybe, or maybe the huge amounts of capital these giant tech corporations have and their way of thinking about opportunity cost if they don’t try to control this ecosystem has just changed the game for good.

One interesting sign came courtesy of a survey by Pitchbook this week: Base compensation for traditional VCs and corporate VCs is almost at parity.

This is a meaningful development for a few reasons. Traditionally corporate VCs didn’t have access to the best investing talent with the best deal flow because they couldn’t come close to the same compensation. Imagine the office politics, where the corporate VC makes more than most of the senior management, even the CEO should he invest early in the next Facebook.

If a corporate VC did luck into a talented investor, that person would be heavily incentivized to leave, for a firm where he or she could have more control and upside.

Check out the new numbers: 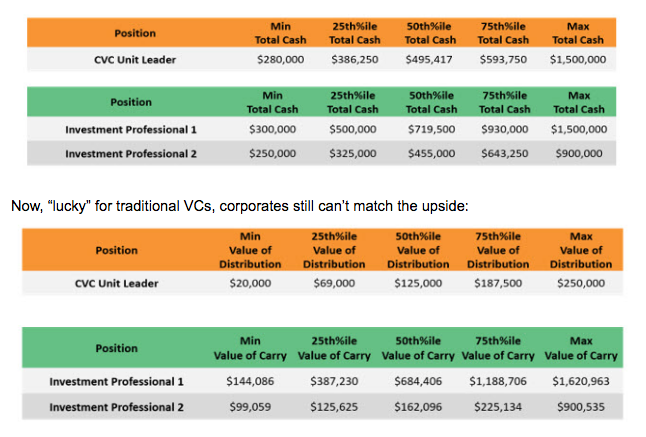 In theory that should mean the very best investors still want to be outside of corporations, and that should be of note to founders. Someone working inside a corporate VC arm generally does not believe he or she would have as high returns as their peers. That or they’re just cool making a fraction of what they would at a venture firm.

Still, the parity in base salary is a sign that many corporations don’t view these units as a fringe activity to be cut during a downturn in the market. It’s something they’re investing heavily in.