Ouch: 73% of techies perceive Uber’s culture as “bad/very bad”; 73% believe it is overvalued and only 19% are interested in working there

On Wednesday I wrote about the real reason the gender gap is widening in Silicon Valley: The glorification of the bro culture.

As part of a larger argument, I cited several women who refuse to work at Uber -- despite being the highest valued company in the Valley right now-- because of this gender hostility.

I was hit by a wave of Tweets and emails reminding me that many men too are disgusted with the bro-culture, particularly as personified by Uber. Indeed, I know several high level recruits who are men who have refused to join Uber for those reasons.

But my examples were anecdotal. I assumed overall, greed ultimately trump all that, the same way convenience trumps privacy concerns now that Uber is dipping into your calendar. Well, maybe not.

An app called Blind sent me a survey report after my story with some interesting insights about Uber.

A word about Blind first. It is sort of like an anonymous GlassDoor, and let me be clear: I hate anonymity apps. But Blind, at least, has worked to address some of the usual shortcomings of a toxic swamp like Secret. You have to have a verified company email address to join and  a company’s employees are only allowed to join once Blind has received 150 legitimate requests. As such the largest groups on Blind are employees of large companies like Microsoft, Google, Facebook and mega “startups” like Uber. According to the company, one in five employees at LinkedIn use Blind, one in seven Microsoft employees use Blind, and one in 10 Uber employees use it. Overall two dozen major US tech companies have clusters of employees using the service.

So what do verified employees at largest tech companies (including Uber) think of Uber? Blind surveyed more than 150 of its members.

The first slide had to do with the hype around self driving cars. On the upside: Uber has promised that self-driving cars will solve many of its problems with loud, discontented, expensive drivers. On the downside: Uber will face far more competition.

Uber’s “self driving car” photo opp in Philadelphia aside, when do techies believe this reality will really hit? Most expect it is at least five years off. 70% are in the 5-10+ year range. 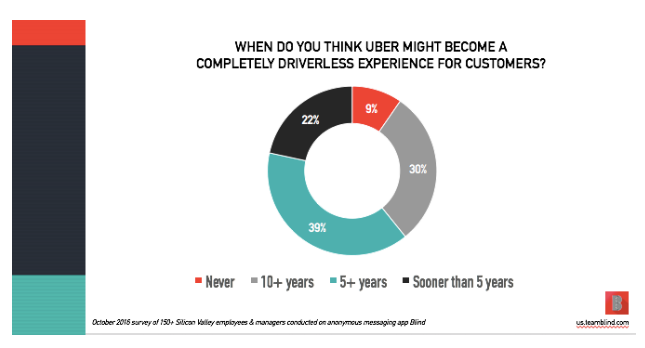 That doesn’t bode well for Uber owning the self-driving car era. Ten years is an eternity in tech. If that’s the future of ridesharing Uber could be too early.

And what about Uber’s valuation? It is, after all, the highest for a private company in Valley history. Watching the valuation trap Twitter has found itself in, this is possibly the most important question when it comes to Uber’s future.

73% of those surveyed believe the company is already overvalued. 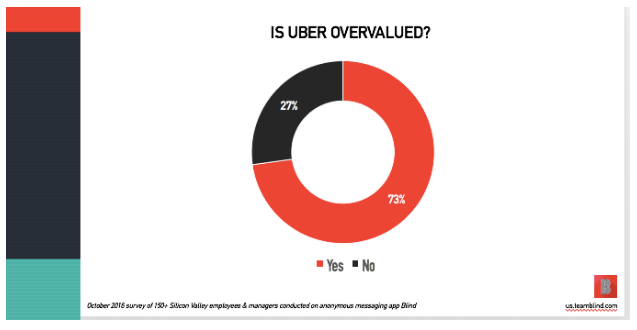 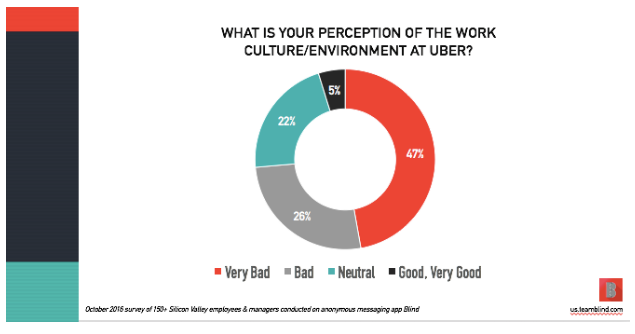 Lastly, Blind asked “Are you interested in working for Uber?” Despite a business that investors seem to fund at any price, 51% of those surveyed said no. 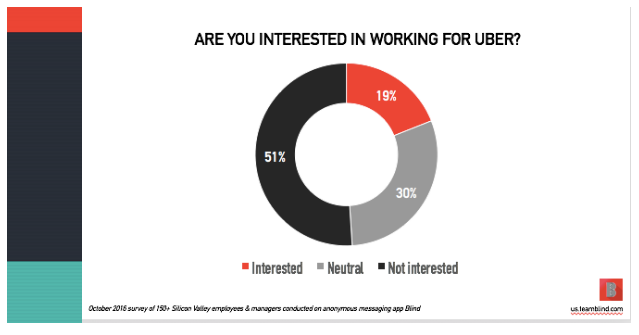 If true, this could explain why Uber’s head of HR quit to join Twitter earlier this year. (Twitter!)

This isn’t the first time Uber has been embarrassed by Blind. Earlier this fall, BusinessInsider published some leaked screenshots from Blind that highlighted some Uber employees concerns, specifically about the value of their stock options and if an IPO would ever happen, and about the company’s future margins if it becomes tantamount to another airline in an competitive, low-priced self driving car era.

This was particularly interesting. A poll to define what “Uber is...” 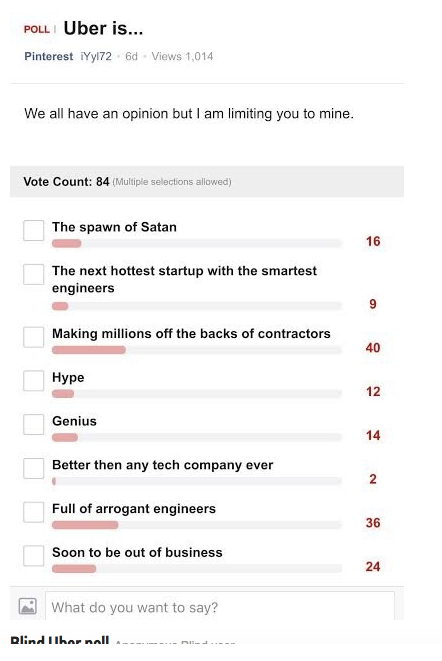 That’s right: “Spawn of Satan” outranked “genius” among verified employees of major tech companies. Bear in mind 10% of Uber workers are on this app. That should have theoretically lifted the hype, right?

It’s the first time I’ve seen numbers on something that’s obvious if you talk to enough people here: This is not a beloved company. When fortune turns for Uber, it’s going to turn hard.