So, it seems Snap has filed its IPO paperwork privately.

Not a shock. It has well under $1 billion in revenues per year, so it can, and it’s been clear that an IPO is coming. Bankers have been picked in Morgan Stanley and Goldman Sachs, and the company is reportedly looking to raise $4 billion at a valuation between $20 billion and $25 billion.

I’ve spoken to sources in the banking world who’ve said that Snap has already been making its case to investors. And appropriately, the pitch to bankers is every bit as orthogonal to Facebook as Snap’s ephemeral product, its “retargeting is creepy” ad philosophy, and its fixation with privacy.

That’s to say nothing of the orthogonal hardware strategies of the two.

Facebook: A $2 billion gamble on a technically impressive and yet wonky, gamer-focused, high-end Oculus Rift. (One that hadn’t shipped a product yet at the time of the purchase.)

Snap: A sexy “toy” in Spectacles launched in the an almost Pokemon-Go-like strategy of vending machines just popping up IRL around the country, followed by a Charlie-and-the-Chocolate-factory-like run on them. We wrote about how the initial messaging and roll out of Spectacles was brilliant. The vending machines took it to a new level.

Facebook needs Oculus to be worth something, and boasted at the time of acquisition it could be the next ad platform of the scale of mobile. That’s still a big bet despite the enthusiasm around VR and AR.

Snap meanwhile has positioned Spectacles as a lark that can be a failure and not cost the company much time or cash or distraction. 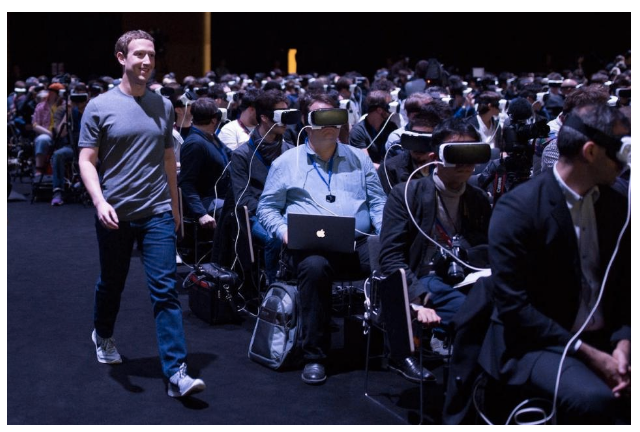 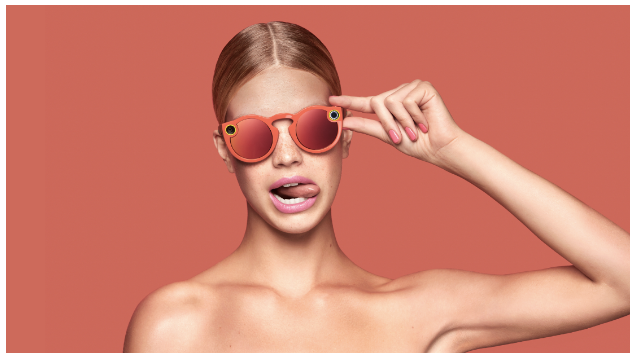 Both are kinda creepy. One is looks like a preview of post-apocalyptic things to come with a gooning overlord and one is… an homage to Miley Cyrus? One has only naked people it its campaign and the other…. Oh, God please let’s not see them naked.

It’s One Hacker Way vs. LA.

Facebook has bots and Oculus has this, an IRL “bot” that looks like Muno from Yo Gabba Gabba: 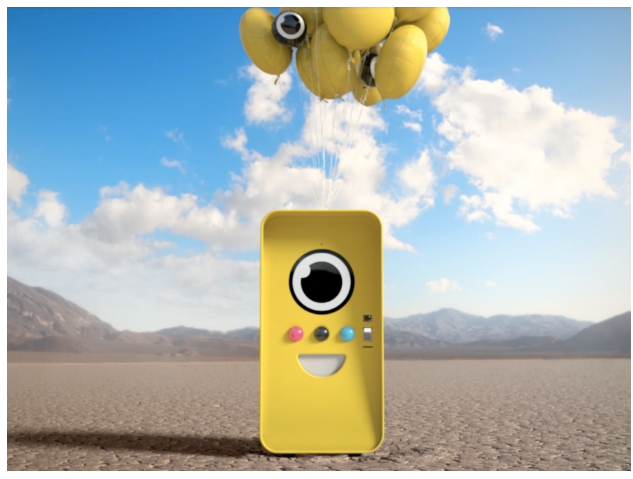 Given Snapchat’s virality has always been a more IRL form of -- Hey! Check this out on my phone!-- and less brute forced virality via emails, it’s a fitting second act that continues to define what sets this company apart. Every bit as remarkably un-Facebook as the core product.

So, it is not surprising then that Snapchat’s pitch to bankers is also every bit as orthogonal. Snapchat as a public company is gonna do more with less. Snap is reportedly telling bankers that it has no such grand ambitions to “connect the world.” It won’t rival Facebook in users, and won’t try. Snap hopes to grow users from 150 million to 500 million or so and use its creativity to monetize the shit out of them. The acronym to watch isn’t DAU or MAU but ARPU-- or average revenue per user.

Compare that to Facebook’s sheer scale and obsession with continuing to grow that scale.

The company is astoundingly-- and impressively-- paranoid about that user growth topping out. When big ol’ blue desktop version of Facebook appeared to be aging and not adapting well to the mobile age, Facebook aggressively spent some $20 billion on acquisitions and masterminded an aggressive Messenger launch that brute forced its user base into downloading a new app.

As a result: Facebook owns every major US mobile messenging platform except Snap. Which it tried to buy. Which it still tries to copy, recently going full-on Samwer, using its reach to launch its version of Snapchat in other countries before Snap can. Industry folks have joked that Facebook likely has more people “working on Snapchat” than Snap does.

Facebook doesn’t just go after the big guys: Remember its rip-offs of Quora and Foursquare when those apps were considered hot?

Facebook has to catch ‘em all. I don’t say this as a way of criticism, I say it in way of admiration. This is the reason I think Facebook competes with only Amazon in terms of sheer formidable power right now. It operates straight out of the Andy Grove, “Only the paranoid survive” playbook.

Snapchat has done the opposite. It has consciously limited its appeal of who it’s “for” by rolling out features that are tantamount to a “Millennials Only!” clubhouse sign. For instance, its bet on Discover at the time in its life when it should have been trying to expand its user base, the way Facebook distanced itself from being a “thing people in college use.”

In fact, when Snapchat started to go aggressively down this road, we saw journalist after journalist throwing up their hands saying they just couldn’t get Snapchat because they weren’t the demo. Anecdotally, I saw a huge drop off in the activity of the people I knew using the service at the same time. Which is a shame because Snapchat is a brilliant utility. There is nothing about the functionality that should feel limited to a certain demographic. Rather, it’s the company’s positioning of the app that has given off that vibe.

I’ve been hugely critical of Discover and, aside from Evan Spiegel’s sexist college emails, it’s the only thing I have criticized Spiegel on. He’s embraced being the next VICE instead of the next Facebook.

And in doing this, Snap may have actually created a bigger challenge for itself. Sure amassing billions of users is obviously pretty damn impressive and hard to replicate. But for the last ten years, the holy grail of the consumer Internet has been building a site that can excel and grow as a public company despite not having the maximum amount of users.

Yelp tried it. Twitter tried it. LinkedIn tried it. Foursquare tried it. Pinterest tried it. And LinkedIn may have been the most successful, because it didn’t solely rely on advertising. But even LinkedIn tapped out, snagging a $26 billion life-raft after its first major stumbles.

Can Snap continually grow ARPU on a more modest user base simply via Doritos and Gatorade filters? Particularly in the age of the dreaded fear of …. (duh duh duh!) THE AD LOAD.

Morgan Stanley did not mean [those facts] as a compliment…

...[Adam Bain] is the one who’s arguably done the best job since Twitter went public. He’s done such a good job that Twitter is charging too much for too many ads, given its size.

How fortunes have changed since Twitter’s early days, when everyone asked how it could ever make money. It makes plenty relative to what it is today. And that’s why it just got a big honking downgrade.

That was more than a year ago, and Morgan Stanley was right to be concerned: Last July, Twitter missed earnings, because its ad products had such a premium price, while its user growth stalled and new platforms like Snap surged. In October, the company did better relative to expectations and yet, ad sales growth also flattened out: They increased just 6%, compared to a 60% jump for the same period in 2015.

Even Facebook has warned of an increasing ad load slowing its growth in the coming year.

Now, Snapchat is a better run and more innovative company than Twitter, no question. It has only had one CEO, and one that has a dictatorial lock on the company. That eliminates tribalism and feuds and leaks that plagued and distracted Twitter pretty much all of its life. While Snap only does $250 million to $350 million in annual ad revenues now, it predicts that will jump to $1 billion next year.

Even its own “do less” plan assumes more users than Twitter and LinkedIn (although not much more) and it may well monetize them better.

Culturally, I think it’d be great for the Internet if Snap did prove it could build a $100 billion+ company without the largest base of users on the Web.

I guess my question if I’m a potential Snap investor is the same as the one I’ve had the last few years: Why not have both?

I don’t believe there is anything “niche” about Snap as a product, and Spiegel is clearly a product and marketing genius. I want those Spectacles for taking pictures of my kids opening Christmas gifts as much as some douche wants them for recording his pals playing drinking games at a BBQ. And take it from every musician, actor, trend spotter, game designer, media property, and Web platform: YOU DO NOT STAY HIP WITH THE KIDS FOREVER.

Snap is smart to break with the decacorn ranks and go public comparatively early, while so much growth is still ahead of it. Perhaps the half-a-billion user cap is a way of setting expectations. A way of avoiding the potential of a Twitter trap: A valuation based on being a Facebook comp that it could simply never grow into. Of course, Snapchat’s aspirational $25 billion valuation isn’t exactly modest for a company with 150 millions users. But today Facebook is also that much bigger of a comp than it was when Twitter went public.

Or maybe Spiegel really does want to be somewhere between the next VICE and the next Facebook. He’s never aspired to be Mark Zuckerberg in terms of product aesthetic, maybe he doesn’t want to build the first $1 trillion global Web utility either.

Bankers are good enough, Spiegel is good enough, Spectacles is buzzy enough, and the core product is revolutionary enough, I’m betting the IPO will be successful. Spiegel will be vindicated for refusing to sell to Facebook years back. But whether Snap becomes “the Facebook” of the mobile first generation seems to rely on a very LA velvet-rope-like gamble on users cool enough to use it, lucky enough to get massively monetized by it.