While trust-related scandals rock Facebook, Snapchat quietly pitches itself to bankers as the ultimate alternative

Is Facebook getting ephemerality envy?
By Sarah Lacy
Nov 23, 2016 · 7 minutes

Right about now, plenty of journalists all over America are coming up with hackneyed leads that bend the whole idea of “giving thanks” into whatever story they are being forced to write before a well-deserved four day weekend.

(Trust me, the hackneyed PR pitches are even worse.)

Fortunately, I don’t even have to try to bring Thanksgiving into my lead. No contortions necessary; the lead just writes itself. Ready? Here we go:

SNAPCHAT AND ITS BANKERS CERTAINLY HAVE A LOT TO BE THANKFUL FOR: ALL OF THE SUDDEN FACEBOOK CAN’T STOP SCREWING UP!

Yes, it’s been quite a November for the $350 billion colossus who seemed invincible just earlier this month when it reported earning reports so stellar, journalists had to come up with new superlatives on Twitter just to one-up one another.

Facebook’s Mark Zuckerberg has made it clear he wants to build the first $1 trillion company. And he appeared to have as good a chance as anyone in tech for reasons we’ve detailed at length.

Sure, the company’s CFO cautioned that the next year would be an “investment” year for Facebook, sending shares down. But still, it’s Facebook! The incredible growth machine that has somehow bent the laws of large numbers and the hexes on high-dollar acquisitions in the tech world, making it all just work.

And then the election dramatically broke Facebook’s stride.

Four scandals have plagued the company, piling in one on top of another:

First and the biggest is clearly the whole fake news thing. The second I heard that Zuckerberg claimed it was “crazy” to think fake news influenced the election I felt teleported back to 2007 when Zuckerberg didn’t handle user criticism of the introduction of the Newsfeed so well. Since then, he’s learned to apologise, he’s cultivated a humble image, he’s become as close to a diplomat as I’ve seen any tech leader.

The problem is that came several weeks into Facebook digging it its heels and the media howling, even amid a rare employee mini-revolt. Even after Facebook’s board member Peter Thiel was already working on Donald Trump’s transition team. Even after Zuckerberg-themed fake news became a meme: 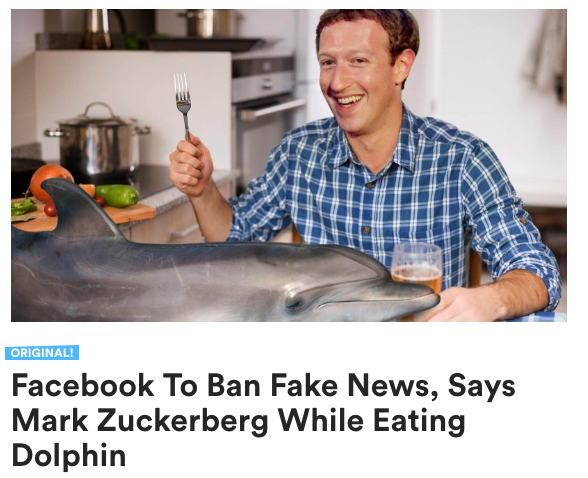 We’ve covered this at length, including Kevin Kelleher’s piece yesterday describing Facebook’s potentially unwinnable war with “truth.” So let’s move on to other scandals for a moment.

Second, there was the news that Facebook-- once again-- miscalculated ad metrics. This came just a few months after Facebook admitted to “overestimating” video views. I mean… this is a technology company, right?

These two scandals alone were enough to worry some investors. But Facebook wasn’t done.

Third, there was the bizarre story about Facebook’s Aquila drone, which Bloomberg reported had a structural failure during its first test flight, several months after The Verge reported that was a success. But although the Verge’s Casey Newton admirably fell on his sword for that story, he was essentially sold a bill of “fake news” by Zuckerberg himself in a rare interview:

My account, which was based on interviews with Mark Zuckerberg and members of the team that was present on the ground for the June 28th flight, presented the flight as an unqualified success.

Newton chided himself essentially for believing what the CEO of the company told him straight to his face.

We’re not done. Last night Mike Isaac of the New York Times reported that inside Facebook, the company’s ambitions to get into China have apparently outstripped its previous stand against censorship. From Isaac’s piece:

The social network has quietly developed software to suppress posts from appearing in people’s news feeds in specific geographic areas, according to three current and former Facebook employees, who asked for anonymity because the tool is confidential. The feature was created to help Facebook get into China, a market where the social network has been blocked, these people said. Mr. Zuckerberg has supported and defended the effort, the people added.

Facebook has restricted content in other countries before, such as Pakistan, Russia and Turkey, in keeping with the typical practice of American internet companies that generally comply with government requests to block certain content after it is posted. Facebook blocked roughly 55,000 pieces of content in about 20 countries between July 2015 and December 2015, for example. But the new feature takes that a step further by preventing content from appearing in feeds in China in the first place.

Facebook does not intend to suppress the posts itself. Instead, it would offer the software to enable a third party — in this case, most likely a partner Chinese company — to monitor popular stories and topics that bubble up as users share them across the social network, the people said. Facebook’s partner would then have full control to decide whether those posts should show up in users’ feeds.

Throughout the fake news scandal, Paul has been saying that Facebook always makes it decisions not out of empirical right or wrong but from looking at the data. It seems after some seven years of being banned in China, it could no longer ignore “the data.” Not everyone at the company takes such a robotic view: Isaac also reported that several employees had quit Facebook, after having misgivings about the project.

The only seemingly unshakable institution that’s had a worse November than Facebook is American democracy.

Let’s think about what these four scandal (and counting!) have in common. They all come down to trust, which has always been long been a weak spot between Facebook and consumers. (Remember the whole fucking with our emotions in the name of data thing? The Burston Marsteller scandal? The many privacy freakouts from the Newsfeed to Beacon?)

The other thread in common: Employees who’ve imbibed on the Facebook Kool-Aid expressing regrets to one another and reporters.

Now reconsider the warning of an “investment year,” and Facebook suddenly looks human. It suddenly looks vulnerable. The way Google did just before Facebook went public when it wondered it if had missed the next great thing in social and half-assedly tried to compete with Google+, even growing so desperate it broke it’s own hard and fast ethical rules never to tamper with search results.

Assuming you bought that Facebook’s next wave of growth was messaging, which Zuckerberg has said is far bigger than social. Well, there’s exactly one American company that has a top five messaging platform that is not owned by Facebook. And it’s already filed to go public.

If you must have the curse of having Facebook as a public market comp, the timing couldn’t be better.

Wait, I take it back. It could last up until the IPO early next year. If you are Snapchat meeting with bankers watching this you have to feel a bit like the Hillary Clinton campaign did when the Access Hollywood “grab ‘em by the pussy!” video came out. Sure, it’s great… but can we extend the shock and scandal of it all the way until November 8?

It helps that Snapchat-- from its earliest incarnation-- has done every single thing possible to be as orthogonal to Facebook as it could. That includes its software, its hardware, its headquarters, its culture, its thoughts on creepy retargeted ads, and-- as I detailed last week-- its pitch to bankers.

In tech it all goes back to the product: And the reason for Snapchat to exist initially? The overreaches that Facebook made when it comes to user’s privacy.

That gulf in fundamental organizing principle between Facebook and Snapchat is as vast as the one between machine oriented Google and human and emotion powered Facebook.

You couldn’t have scripted it better.