Three years ago Marc Andreessen predicted the death of retail. Does BestBuy prove him right or Amazon prove him wrong?

Brick-and-mortar economics were unsustainable, but software alone may not be the answer
By Sarah Lacy
Dec 12, 2016 · 5 minutes

Back in 2013, we published a story that got a lot of attention: An interview with VC (and Pando investor) Marc Andreessen in which he predicted the absolute and unequivocal death of physical retail.

...he talked about how the macro story of Ecommerce 2.0 is really only going to hit its stride in the next three to four years. That's a dramatically different view from people who believe it's petering out as innovations like flash sales and subscription commerce are becoming overused gimmicks.

Instead, Andreessen expects this wave to keep building and high drama to come by the end of the decade. "Retail guys are going to go out of business and ecommerce will become the place everyone buys. You are not going to have a choice," he says. "We're still pre-death of retail, and we're already seeing a huge wave of growth. The best in class are going to get better and better. We view this as a long term opportunity."

That somewhat extreme view could explain the bets the firm has made on companies like ShoeDazzle, Zulily, and Fab at extremely heady valuations, relative to their size and the multiples of a company like Amazon -- not to mention weaker ecommerce companies. It might also bode well for the struggling eBay, which Andreessen is also on the board of.

"Retail chains are a fundamentally implausible economic structure if there's a viable alternative," he says. "You combine the fixed cost of real estate with inventory, and it puts every retailer in a highly leveraged position. Few can survive a decline of 20 to 30 percent in revenues. It just doesn't make any sense for all this stuff to sit on shelves. There is fundamentally a better model."

But what will really bring retail to its knees isn't just the baggage of physical stores and inventory -- or at least excess inventory that isn't intelligently matched to what consumers want. It's the shopping experiences that companies like Fab and ShoeDazzle are starting to create, he says. The fun, the browsing, the entertainment, and the social aspect were largely what was keeping malls and traditional retail alive. But Andreessen believes the online world is finally starting to compete. "Malls are going under, and there's more to come," he says. "These chains are much closer to going under than you think."

...And what about the excitement around massive new retail brands like H&M and Zara who have capitalized on modern supply chains, fast-churning sales and low costs to create some of the biggest entrepreneur success stories in traditional retail? Andreessen views their success as "more transitionary than permanent." "I'd bet on the pure plays in ecommerce," he says. "Software eats retail."

It was a controversial bet that invoked a lot of debate at the time.

To those critics, a couple things are obvious three years later. The first is that Andreessen is no longer on the board of eBay, and it’s stock has struggled post PayPal spin-off. The second is that those bets on ShoeDazzle, Zulily, and Fab had mixed results for the firm: Fab was an unmitigated disaster, Zulily was the lone one in the space to make it to an IPO before selling for a sad amount to QVC, and ShoeDazzle failed but sold to JustFab which is reportedly a 2017 IPO candidate.

There are firms that did worse than Andreessen Horowitz, but none of these companies are stars of the portfolio.

Not only that but many of the surviving ecommerce 2.0 companies are increasingly leveraging physical retail-- existing retail or their own stores. That includes Bonobos, Walker & Co, Harry’s Shave Club, Warby Parker, Birchbox, Honest, and Madison Reed -- which is opening a Dry Bar Style “root touch up” location in New York this month.

But these are hardly the unicorns of the startup world, and most of them are growing at slow rates, compared to pure software companies. That could just as easily bolster Andreessen’s point.

Last week, Amazon may have dealt seemingly the biggest blow to Andreessen’s “software eats retail” theory when it announced it was opening a chain of physical grocery stores called AmazonGo. It’s unclear how big of an initiative this is, but if Amazon-- the company that shoved so much of commerce online, creating a superstore of near-endless “inventory” and low, low, low prices-- is investing in brick and mortar, clearly stores is not done.

And yet… it bears noting how different these stores will be, and how different the pop-ups, guideshops and other retail efforts of the Ecommerce 2.0 survivors are. Amazon will dramatically change the economics of these stores by automating check out, and guide shops and the like change the economics by not carrying inventory, but rather shipping your goods to you later on.

And AmazonGo is as much of a potential threat against Internet companies as retailers. For instance, I’ve long been arguing for years that meal kit companies like BlueApron and Plated should partner with existing brick and mortar stores like WholeFoods who already have the food in house, make fresh meals and snacks, and could help loosen up the way-too-rigid subscription plans of these companies. Guess who’s gonna be selling meal kits? AmazonGo. You can bet they’ll be available for delivery too if the strategy takes off, without the rigid weekly subscription. Some viewed the move as a sign of just how hard pure-delivery only groceries had proved for Amazon.

So while the trend may not extend as far as Andreessen argued three years ago, both efforts do change the economics that he said were broken in brick-and-mortar. There’s also this to bolster his original argument. Take a look at this chart that’s making it’s way around the Web and was in my morning CB Insights newsletter: 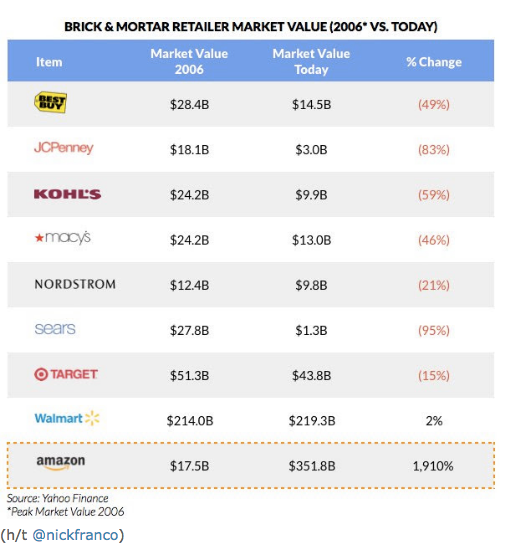 So take it all together, and how has Andreessen done on his bold prediction as we near the end of the decade, the time when he said things would really start to get dramatic:

Did startups like ShoeDazzle and Fab change up the shopping experience moving the fun of browsing online? No.

Will innovative fast-fashion give way to pure ecommerce, software only solutions? So far, it doesn’t look like it. In fact, the ultimate software play-- Amazon-- is going physical.

Were retail chains a “fundamentally implausible economic structure?” Look at the chart above. Yep.

Does carrying inventory and having traditional fixed costs still work? Taking together Amazon’s strategy, that of the ecommerce 2.0 companies above and the chart above, it doesn’t seem so.

Retail may not be dying, but Andreessen was right in diagnosis its ills… and detailing just how far from insolvency some of the biggest players might be.