With a $70 billion valuation on the line, why won't Uber stop punching itself?

Since last fall, there’s been a fascinating slow and steady erosion in the press and the public’s confidence that Uber’s record breaking valuation is warranted.

It started with Uber’s sudden capitulation on the China market, after insisting for more than a year it was gaining share-- even excelling. That capitulation meant that Uber would not be the world’s largest ridesharing company in the world. It was Uber’s first unequivocal defeat by a deeper pocketed competitor playing its own game. It was the first time Uber looked fallible even to its do-no-wrong fans.

Then there were leaks showing that it’s in no way profitable in the US, and indeed its business model may not even work.

Even Lyft finally decided it finally could take a punch at Uber, with an aggressive ad campaign, that seems to be landing. I saw this on Twitter the other day: 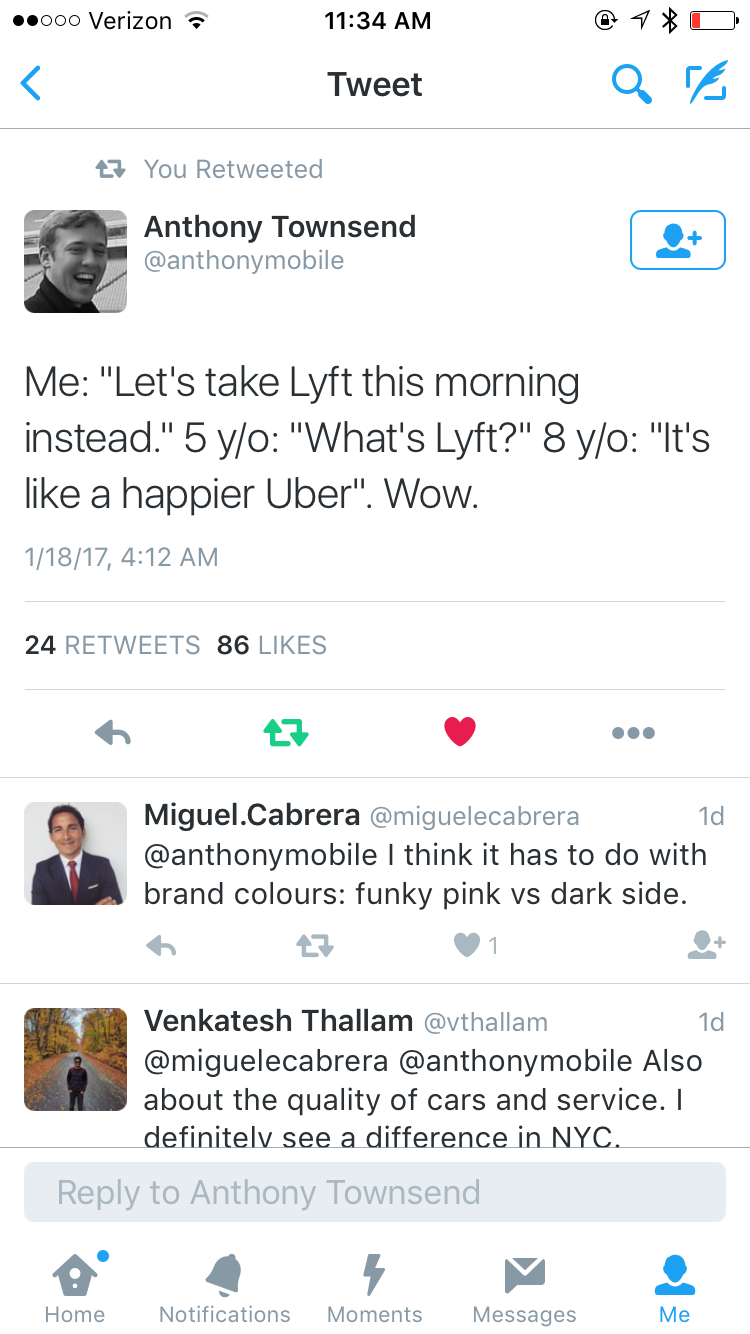 The Information noted yesterday that despite breaking funding records, Uber needs more cash, because it’s global competitors together have raised about as much.

And that matters because this is a commodity business, and those are won in cash. DiDi Chuxing, at least, proved that local matters greatly in other countries. And detente aside, Didi is still directly funding Uber’s competitors in other parts of the world.

Where are the next billions going to come from? Hard to know. Uber has already gone the oppressive regime route, even giving the Saudi government a board seat. Two prominent investment banks already declined to sell Uber shares to high net worth clients.

The drivers play an interesting role in this high-stakes $70 billion universe of problems. There is no love lost between Uber and its drivers, there have been protests, lawsuits, and Uber has continually cut rates and refused to cave on even the simplest driver demands, like allowing people to tip through the app as Lyft does.

Uber has spent years saying it can’t wait to disrupt its own drivers with self driving cars. And yet, many have argued that Uber’s edge in the coming 20-company-plus throw down in self driving ridesharing is its data from millions of rides and installed base of passengers, something that wouldn’t be possible without those expensive, inconvenient, uncontrollable humans.

Uber needs drivers if it has a shot of reaching this inflection point.

And drivers need Uber too. We’ve noted before that Uber has not been particularly coy about the terms of operating on its platform, clear that it never intends to offer benefits, tipping, and that it can’t wait until it doesn’t need them. If you take all that in and still drive for them, you’re either a masochist or you don't have options.

Thanks in part to those billions of dollars raised, Uber is where the riders are, no matter where the drivers wish they were. And this is why Uber feels like they can be such assholes to drivers.

Wanna understand this in chart form? Take a look at The Rideshare Guy’s annual driver survey, released yesterday. It’s one of the largest such collection of data that is free from the normal Uber/Lyft marketing spin.

Less than 10% of drivers “strongly agree” that they are satisfied driving for Uber.

Drivers hate UberPool even more, which is bad news because Uber hopes that’s the future of the business. It allows for more efficiency and lower fares.

Compare that to Lyft. 33% of its drivers “strongly agree” that they are satisfied driving for Lyft.

Why? As much as Lyft may argue it’s about meet-up, moustaches, and nice guy culture, the data doesn’t show that. Only 3% GAF about company culture. Less than that-- just 1.1%-- wanted benefits, despite the court battles over whether drivers are employees or not. They just want better pay and flexibility.

A big chunk of drivers seem to drive for both services. 43% of those surveyed said they drive for two on demand companies.

And yet, despite triple the satisfaction, higher pay, far more drivers list Uber as the company they drive the most for. By a huge margin.

So taken together what does this tell us? Lyft is doing a decent job getting Uber drivers to also sign up for Lyft. That proves my argument that these aren’t tech companies, nor are they network effect companies. They are commodity products, an almost identical app, that offers the same service at roughly the same price point, with a massive overlap in the person providing the service.

Uber has acknowledged this itself when it named a marketing guy from Target it’s number two executive. This isn’t Facebook and Twitter, this is Coke and Pepsi. That will present a cultural challenge in the shift to autonomous vehicles. Uber already saw the playbook isn’t the same when it tried to ask forgiveness for launching self-driving cars in San Francisco, and was swatted down by the DMV, with the public mostly on the DMV’s side for once.

But this data also tells us something else: Uber’s biggest problems with drivers-- churn, dissatisfaction, them preferring the competition-- are completely unnecessary and completely self-inflicted.

Let’s agree that getting more drivers, rides, and passengers are essential for Uber to get to the stage where it can get rid of drivers. That Uber needs to dominate Act I in order to go public at this valuation. That that is Uber’s theoretical edge against a company like Tesla that’s being positioned as the new Apple and against Google which has a capital and technology advantage.

And let’s agree that Uber is under pressure to prove its US model works. That means it needs to be able to pay less to acquire drivers and get more out of them.

This survey actually has good news: These drivers don’t want to be employees. They want flexibility, which also helps Lyft and Uber’s argument against fingerprinting in US cities. All they want is more pay, and Uber can easily do that by caving on one single driver demand. One that doesn’t hurt Uber’s already woeful margins: Enabling people to tip through the app. There’s a reason tipping features prominently in Lyft’s ads. Because to the outside world, it just seems mean that Uber won’t encourage or enable riders to tip.

In one move, Uber could eliminate the single biggest product differentiator between itself and Lyft, make drivers dramatically happier, and score a massive “Oh! They’ve changed!” PR win. Twitter’s no. 2 executive Jeff Jones has already tried to posture a shift in caring about drivers, with a fuzzy LinkedIn post called “In business, you have to have ears as well as a mouth.” This is an incredibly easy way for him to say “See! I listened and it worked!”

But if past is prologue, Uber won’t do this because it really, really needs the world to know it doesn’t take orders from anyone. Even the people its valuation and potential IPO rides on.