Now is the time, @Jack

Not banning Trump from Twitter sooner will be Jack Dorsey's biggest regret. (And here's how he could do it now.)
By Paul Bradley Carr
Jan 31, 2017 · 6 minutes

A decade from now, or maybe sooner, Jack Dorsey will sit down for an interview with a major newspaper. In that interview he’ll be asked a question: What’s your biggest regret?

He won’t have to hesitate for a second before answering: “My biggest regret is failing to ban Donald Trump’s account much sooner.”

Future Jack is right to feel ashamed. His failure to enforce Twitter’s own rules on trolling, abuse and harassment is unforgivable and hypocritical. Many thousands of Twitter users have already been banned for behavior that pales in comparison (and scope) to that of Trump.

Stranger still, failing to ban Trump from Twitter is also against Dorsey’s own best interests, and that of his company. From the murmurs I’m hearing from inside Twitter, there’s large and growing outrage amongst employees that the biggest troll of all -- a guy who, with the flick of his pen, sentenced countless refugees to death and countless more to a life of misery -- is still able to ply his despicable trade on the company’s platform. Meanwhile, for all the sound and fury, Twitter’s user growth remains flat-to-stunted and its stock graph still looks like this… 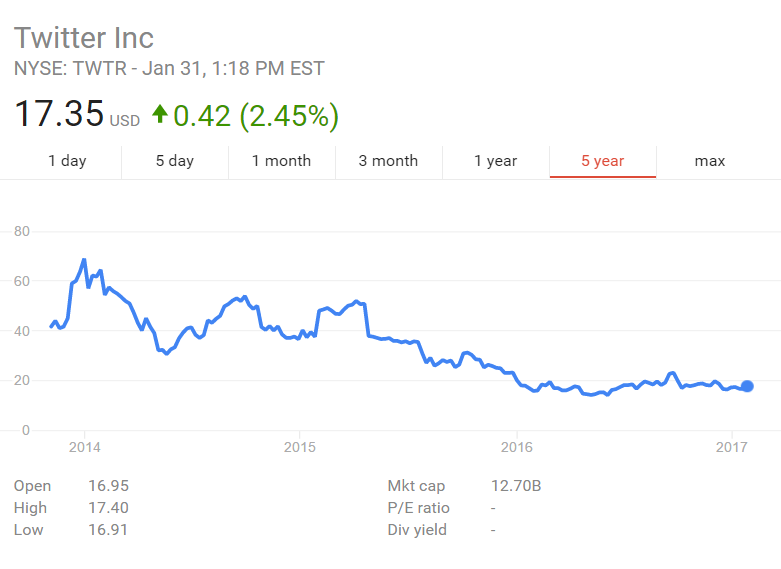 (And forget an acquisition: Ask Salesforce how potential acquirers feel about the idea of buying a Twitter synonymous with trolling and abuse.)

Let’s quickly dispense with the excuses:

Dorsey has a fiduciary duty to employees and shareholders! I’d guess there isn’t a single Twitter employee who would hold a grudge against Dorsey if he made the tough decision to ban Trump and it ended up damaging the company. Twitter has already been cut out of Trump’s inner circle. We’ve already seen mass walk-outs at Google, internal protests at Facebook and, from what I understand, even Uber employees are mad at Travis Kalanick for surpassing even his usual level of awfulness. Does anyone really believe that Twitter is a secret hotbed of Trump supporters? Shareholders: Maybe. But, take another look at that stock price. Clearly Trump has done nothing to help that so far. And if Dorsey really believes keeping Trump’s account will turn that around in the long term then, again, it just means he’s putting profits before humanity.

Banning Trump is an attack on his free speech! Trump is the President of the United States. It’s called the bully pulpit for a reason. No one is restricting that guy’s speech, nor could they. Also, this isn’t about free speech, it’s about consistently applying Twitter’s own terms to all users. If you’re arguing against that, then we’re having a different -- much more stupid -- conversation.

We should keep Trump on Twitter so we can monitor his craziness! This one’s my favourite. The world already knows he’s nuts. We don’t need more 140 character examples.

The infuriating thing is Jack Dorsey already knows all of this. He’s not a monster. He knows that allowing Trump to stay on Twitter is bad for the world, bad for employee morale, and will ultimately be his biggest regret. He knows it’s time to act.

So what’s stopping him?

Cowardice. Extreme cowardice. A conscious decision to put his own comfort (and by a handy coincidence, his net worth) above doing the right thing. You know that, I know that, every Twitter user, employee and shareholder knows that.

But Dorsey knows if he bans Trump, all holy hell with break loose - not just for the company, but for him personally. Trump will be on every news network, surrounded by Adolf Bannon and his whole loony army of enablers calling Dorsey and “failing Twitter” every name under the sun. I wouldn’t put it past him to sign an executive order demanding that Twitter be taken over by the National Guard.

Because that’s precisely why now’s the time Dorsey should finally grow a spine and ban @realdonaldtrump from Twitter. Now more than ever, the more unhinged Trump is behaving towards a SIlicon Valley social network, rather than thousands of refugees and others who can’t fight back, the better.

You don’t need me to tell you that Trump’s first few days have been an unmitigated disaster. According to reports, even his own family is furious at him for indulging Steve Bannon’s insane fancies. There are protests in airports, marchers on the streets and a new constitutional crisis every ten minutes. Tomorrow will be worse, and the next day and the next day.

The only thing that can save us now is for those Republicans still supporting Trump through silence to finally decide enough is enough. Some of them are close, but they need another push. Specifically, they need Trump to get just a bit crazier, to do or say something just a little more unhinged. Like, say, getting into a protracted, public fight with Jack Dorsey while the rest of the world is burning would.

On the bravery issue, here’s the best part, Jack. There’s actually a very, very simple way for you to do the right thing, drive Trump nuts but still retain plausible deniability that you’re not, actually, being brave.

The secret: An oft-overlooked paragraph in Twitter’s terms and conditions. A paragraph that Twitter has previously used to shut down the account of at least one alt-right leader…

Creating multiple accounts with overlapping uses...  is not allowed.

Now that Trump is POTUS, he has access to the official presidential account. That’s the very definition of “multiple accounts with overlapping uses.” Twitter would be absolutely in its rights to close the @realdonaldtrump account by invoking that clause.

Why does that help if Trump still has a second account? You only need to glance at the two accounts to see that Trump has been careful to restrict his craziest rants to his personal account, which he then retweets into the @POTUS account.  This separation of craziness is probably not out of any real respect for the office, so much as an understanding that @POTUS is an official government record, archived for eternity as the permanent record of the Trump presidency. Trump’s Republican enablers know that too.

There’s a significant difference between sitting silently by as Trump acts like a lunatic on his personal account and sitting by as he does so under the banner of @POTUS.  Forcing @POTUS -- and therefore the American Government -- to own all of Trump’s crazy rants would be a significant escalation of humiliation for the White House and the GOP. With that, Silicon Valley (and corporate America) takes a meaningful shot across Trump’s bows, and Trump himself take one tiny step closer to impeachment.

At best, banning @realdonaldtrump gives Trump’s silent enablers the excuse they need to act and Jack Dorsey puts his dent in the universe and becomes the new hero of Silicon Valley, and billions of people across the globe.

At the very least, Twitter is just as troubled as it was yesterday but Future Jack Dorsey gets to sleep at night.