Facebook had another great quarter. But which side of history will it be on?

“We hope to change how people relate to their governments and social institutions.”

So said Mark Zuckerberg five years ago, when Facebook filed its initial S-1 to take the company public. Into Facebook's long-awaited prospectus, Zuckerberg tucked a smug little letter saying a lot of now naïve-looking things like “we don't build services to make money.” And he had the temerity to post his letter again on Facebook yesterday – a victory-lap gambit cribbed from Jeff Bezos' playbook, but which Bezos can pull off more convincingly.

Reading the letter again, there were several comments from Zuckerberg that stood out. One of them was, “We have a saying: 'Move fast and break things.' The idea is that if you never break anything, you’re probably not moving fast enough.” Just last week, as the Times'Mike Isaac noted on Twitter, Zuckerberg was testifying in a court case when he was asked about this very saying. That motto was retired, he said.

"Our new motto is build fast by building stable infrastructure,” Zuckerberg testified. “It doesn’t have quite the same ring to it.”

Good one! Or maybe, not so good. In the comments of the republished founder's letter on Facebook, Zuckerberg said that it could have been written today “except for the part about our community only being 900 million people!” (The original founder's letter published on Feb. 1, 2012 actually mentioned 800 million users, not 900 million – it was revised upward in later filings. A small point, yes, but you'd think a founding CEO would remember such milestone moments). So, no mention of the revised motto there. Nor was it brought up in an investor call later on,when  Zuckerberg talked about what he wrote in the founder's letter: “I believe that now more than ever.” So which motto is true? Last week's or this week's?

There has always been a fake naiveté among Zuckerberg's public pronouncements – bright declarations of good intentions while a sin of omission hovers darkly nearby. It's as if Facebook were the good twin constantly trying to cudgel the evil sibling into permanent silence. But evil, as Facebook's own platform has shown in recent months, is hard to shut up once it gets started.

Take the example of how Facebook helps citizens interact with governments, which Zuckerberg highlighted in his founder's letter. Here's how Zuckerberg explained that new, Facebook-powered dynamic.

We believe building tools to help people share can bring a more honest and transparent dialogue around government that could lead to more direct empowerment of people, more accountability for officials and better solutions to some of the biggest problems of our time.

By giving people the power to share, we are starting to see people make their voices heard on a different scale from what has historically been possible. These voices will increase in number and volume. They cannot be ignored.

On the one hand, Zuckerberg had good reason to say this. After all, Facebook had become a powerful organizing platform for protests and revolutions in Tunisia, Egypt and other countries during the Arab Spring in early 2011. On the other hand, Zuckerberg, in May 2011, told members of the G-8 that the movements composing the Arab Spring, dubbed by some the Facebook Revolution, was in fact “not a Facebook thing.” It seems Facebook didn't want to alienate some governments who might not like the idea of Facebook as revolutionary.

Fast forward nine months, and here is Zuckerberg touting to investors, of all people, the company's potential to foster true democracy: Power held to account, better solutions, the people will not be ignored!

Now fast forward again to the present. Nevermind that some governments, during and after the Arab Spring, have been monitoring protesters' Facebook accounts. Or that ISIS would come to rely on “the power to share” of social media platforms like Facebook to organize it own agenda. Zuckerberg today stood by his conviction that Facebook is a force that enhances democracy: empowering its noblest impulses, debilitating its worst.

And why shouldn't he double down? He's right. Facebook did indeed, in his words, “change how people relate to their governments and social institutions.” Not just in the Arab Spring, but in the consequent Winter of Oppression. Not just in its voter-registration campaign in the 2016 election, but in the fake-news scandal that may well have negated its impact. It was never Facebook's fault. It was just that the evil twin proved better at engineering the change Zuckerberg promised. When Breitbart complained about a liberal bias in trending topics, Facebook got right on it. Problem solved. But when Facebook's algorithms opened up a flood of misinformation that had a more tangible impact on reality, Facebook first denied, then vowed to work on the problem.

Why, Facebook is working on that problem even now! “In the past, we have taken steps to reduce spam and clickbait,” Zuckerberg said inTuesday's investor call. “And we are approaching misinformation and hoaxes the same way.” Forgive me, but I hope it's not too ambitious to read into his comments that CEO Mark Zuckerberg can actually solve those problem in time for Mark Zuckerberg the candidate to run for president.

While Zuckerberg was making his anodyne promises, further south in California Twitter ex-CEO Dick Costolo was being more forthright. Twitter is enduring a plague anti-social bullying just as pernicious as Facebook's plague of socially-shared misinformation. Costolo said he wished he could turn back the clock and stop such abuse. Specifically, as Axios' Dan Primack paraphrased it, social media should treat abuse like spam: “Make it more time-consuming and expensive to be the abuser than the abused.”

Costolo's point is a fascinating one. Like most successful tech innovations, social media has thrived because it removes friction from everyday tasks. Friction is sometimes an economic concept, sometimes a business buzzword, but it always signifies some unidentified something that keeps us from getting what we want.

The idea of freeing us from the world of friction is a core tenet of Silicon Valley and the starting point of many startup business plans aiming to succeed by solving a problem. So we'd expect to find it embedded in Facebook's mission – “make the world more open and connected.” Facebook did indeed eliminate the friction of friendships that had always emerged, unwanted, as lives drifted apart, not just year by year but even day by day. And that was good.

I'm being hard on Facebook, intentionally so – anyone who has followed Facebook for at least the past five years should expect better. It's a story, first, of decent earnings and outsize impact on the world, then a story of obscene earnings and unprecedented influence on the world.

So yes, the usual caveats and to-be-sures apply here. For one, Facebook is just one of many companies. But it's a tech leader, and the tech industry has always looked to its leaders not just for financial returns but also for real returns on idealistic dreams. (Otherwise, start a hedge fund.) Apple kept this esteemed but reluctantly worn mantle of tech leadership for years, but for no fault of Tim Cook's, it's now a toss-up between Facebook, Alphabet and Amazon. Among these, Facebook has the greatest influence over everyday lives.

And while we're on the to-be-sures, Facebook's platform helped organize marches and protests. And was a loud venue for those voices. Reed Hastings said it most bluntly in a Facebook post, of all places: “Trump's actions are hurting Netflix employees around the world, and are so un-American it pains us all. Worse, these actions will make America less safe (through hatred and loss of allies) rather than more safe.”

Plug in to cable news for a week and you will not find a tighter, truer summary. By contrast, Zuckerberg drew, like a child, a family tree back to his great grandparents and gabbled things like “I'm also glad the President believes our country should continue to benefit from 'people of great talent coming into the country.'”

Now contrast again this I-for-one statement against the bolder Zuckerberg of five years ago...

These voices will increase in number and volume. They cannot be ignored.

...and one can only hope Hastings is helicoptered into Facebook as its new CEO. I mean, he's much better at shareholder returns. 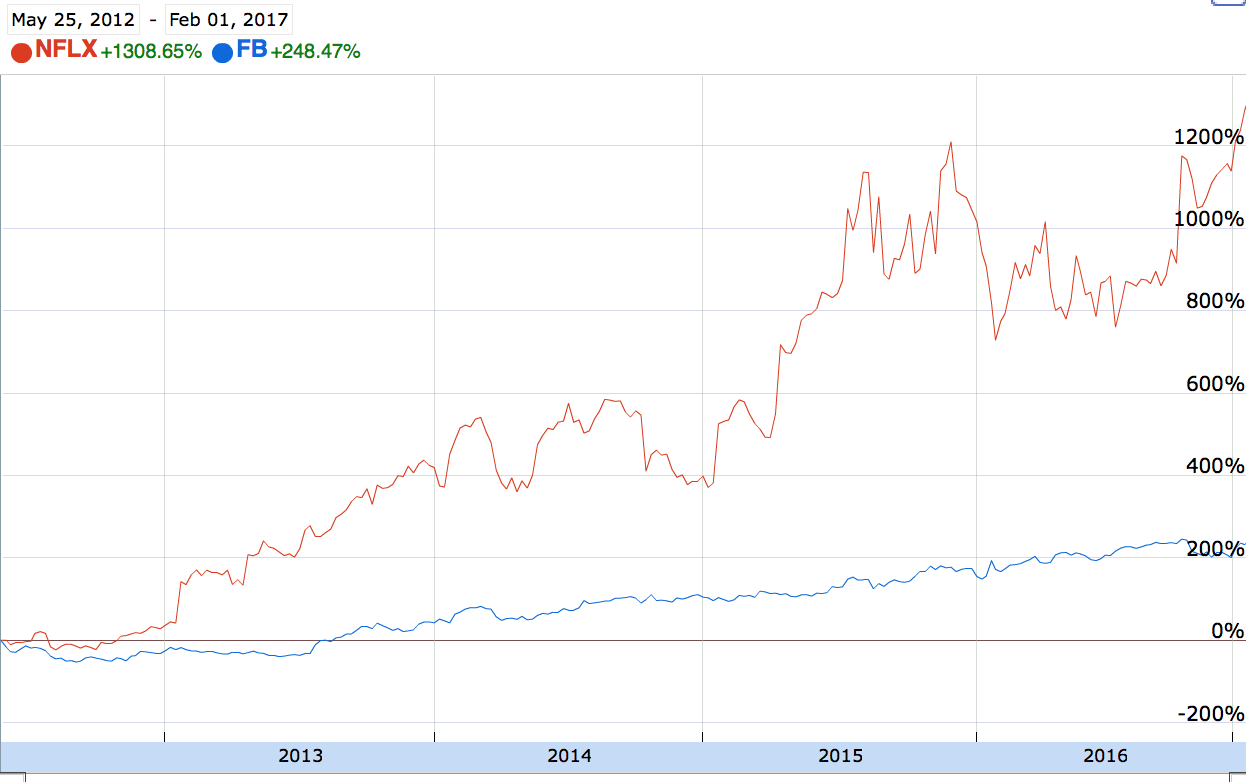 Facebook also reported yesterday another one of its glorious quarters. Revenue grew 51%, and less than half of that revenue was spent to keep its business growing. In other words, for every dollar Facebook made, 52 cents clattered down to its operating profit. Daily active users grew 18% to 1.2 billion. Monthly active users rose to 1.8 billion, half the online Internet population. This company isn't slowing down.

Nor is the scale of its power diminishing. But a corollary of the chestnut that power entails responsibility says that, with great scale comes a great chance to create an unholy mess. The leadership of Facebook doesn't seem to recognize this or, if it does, doesn't know how to handle the fact that the scale of its global impact is proportionate to the scale of its immersive technology.

Facebook shareholders showed mixed sentiments after its earnings. The stock shot up more than 3% initially in after-hours trading, then erased all of those gains overnight. That volatility seems a metaphor for the ambivalence that must be felt by a Facebook employee compensated by stock. A company connects the world. A world, once connected, starts to fall apart. The company grows more valuable, chaos notwithstanding. What do you do now?

What did you do?

I'm reminded of a debate I witnessed long ago, before Facebook was founded. A software engineer was confronting an aspiring painter about creativity. Isn't computer code just as creative a medium as paint? The artist had no coherent answer. I remember thinking both were equally creative. And since then I have often wondered whether the coder wasn't the more creative one.

The flip side is, maybe the engineer was more creative because the world was at peace at that moment. Coders live to solve problems, artists live to make sense of them. It was not a fair fight back then. But now, it's the artists who are speaking up with full throats. The man who proclaimed the Hacker Way is weirdly mute.

Another common saying Zuckerberg cited in that founder letter all those years ago was “code wins arguments.” He was talking about resolving workplace disputes, not anything so large it expands beyond a company and into the world at large.

But all of us – coders, artists, whoever – are now pushed into that world at large, where there is no bigger argument than that between democracy and authoritarianism. And I wonder, is code enough? Facebook's code has been – for better or worse – a powerful voice in that argument, and still one that could play a key role in deciding which side wins.

I'd like to think hackers on Hacker Way are up to this task. As someone once said, your voices can only increase in number and volume. You cannot be ignored.