You know what’s more exciting than the journalism being produced by women’s magazines today? The army of girls reading it

If women don’t get “radicalized” until their 30s, imagine what generation Teen Vogue will become.
By Sarah Lacy
Feb 7, 2017 · 10 minutes

Yesterday, Lily Herman had a Tweet storm that was actually worthy of the overused format.

In response to shock all around that Cosmopolitan broke major political news, Herman-- a contributor for Teen Vogue and managing editor at WayUp-- listed the many scoops and impact pieces women’s magazines have had of late.

Since people are still SHOCKED that Cosmo broke that Kellyanne Conway story, let's go over A+ political reporting by women's mags, shall we?

She concluded: “If the content of women's publications in general (not just mags) is a surprise to you, you've got some reflecting to do.”

Waiting for the manternet to realize that women have always and will always care about politics (TY @lkherman!) https://t.co/9H6RVp1YoH pic.twitter.com/l7WdQ5GFm3

Caring about politics and caring about makeup are not and have never been mutually exclusive ?? https://t.co/lvhXtlk12q

Yes: Women are not one-dimensional and never have been.

And yes: These are not flukes, and you should no longer be shocked about this industry-wide trend. Every grizzled Washington insider I know now subscribes to Teen Vogue. This is beyond a thing.

And, yes, it has been building for a while now. I wrote two years ago about how a reporter from Marie Claire was one of the first journalists I’d seen anywhere to demand Uber actually give data to back up its claim that its cars were safer than cabs. (They couldn’t. They never have. And yet many tech publications still cite it as fact.)

The women cited in this Tweet storm-- and more like them-- are hardly following some sort of rising tide of fearless political reporting and commentary. They are leading it. Look at the work Teen Vogue was doing at the time The Wall Street Journal and NPR wouldn’t even call Trump lies “lies.”

But...there is a reason that people continue to be shocked by it: For most of the decades women like me have been reading some of these same magazines, they didn’t do this kind of work. To not acknowledge that there has been a shift, doesn’t give near enough credit to the women working at these magazines today. You have done something my generation didn’t. Couldn’t, for whatever reason, as much as we were also multi-faceted women who cared about politics and lip gloss at the same time.

It does a disservice to the women working at Women’s Magazines today to view this work as business as it’s always been done at Conde Nast and Hearst. Own this achievement, because it is an achievement.

The closest we had when I was growing up to feminist politics in a women’s magazine was Sassy, which didn’t even last ten years. For most of my teen and adult life, if I had a long flight coming up and cared about both politics and lip gloss, I had had to buy an Economist and a Glamour at the airport. Throw in a BusinessWeek too.

Part of this is an overall trend that Buzzfeed has pioneered: Jonah Peretti’s belief that the same person wants cat videos, listicles, and investigative journalism. When he described that vision five years or so ago, the idea of Buzzfeed having a reporter in the White House Press Corps seemed far fetched. Now the Buzzfeed reporter seems to belong there more than… the guy they’re all covering.

To not acknowledge this is change, takes away from what’s so encouraging about it. What I see reflected through Teen Vogue and other magazines right now is a hope that the post-millenial generation of women may not have a lot of the gender baggage and hang ups that my generation did.

They will not be put in a box.

They will not be forced by any patriarchy into becoming a “queen bees” or “catty women” tearing one another down. They are all congratulating each other on their coverage, amplifying one another’s coverage and the trend at large.

The loudest among them are not scared of your trolls because they get this medium better than a bunch of old misogynist Twitter eggs do. They probably faced worse growing up.

If this is who this generation is, it’s not just the magazines that are radically different from the ones I had in high school and college. It’s the girls the magazines are speaking to. Think of what Sheryl Sandberg described in “Lean In”-- the girl who is too scared to raise her hand in class because smart girls don’t get asked to the prom. That entire book was encouraging women to take a seat at the table. These young women’s magazines are not just grabbing a seat at the table when it comes to making their voices heard, they are standing on top of the table and shouting in your face loudly with a megaphone. It’s like this new Teen Vogue girl has some heretofore undiscovered kryptonite to all the patriarchy’s usual tricks of benevolent sexism carrots and hostile sexism sticks.

This is a shift! Let’s acknowledge it and celebrate it!

This group of women has finally grasped the very thing thing that misogynists hate most: Brilliant women. Two other stories in the news yesterday that amplified this. The first is Trump apparently being mad at Sean Spicer that SNL cast a woman in the role of mocking him. Let that bizarre sentence sink in. The entire Internet is calling for Rosie O’Donnell to play Steve Bannon next week, and Meryl Streep to take over the role of Trump.

Margaret Atwood famously said: “Men are afraid that women will laugh at them. Women are afraid that men will kill them.” Apparently it’s even worse when women laugh at a man, and also impersonate the man making the entire country laugh.

In fact, Twitter moments grouped the two stories together: 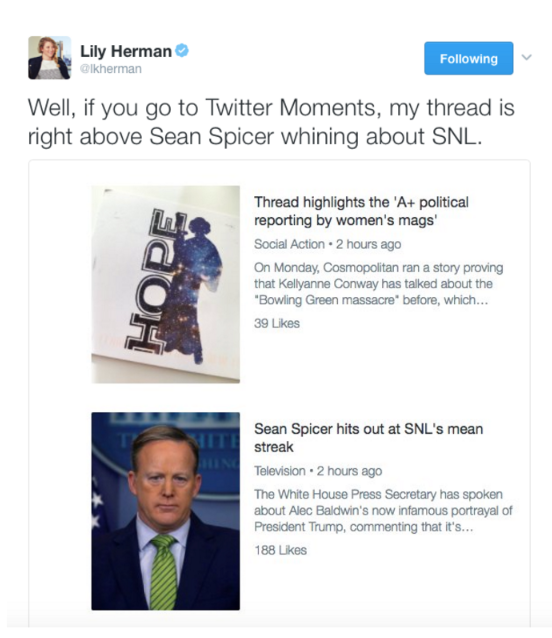 The second example actually had nothing to do with the White House. It was this story in

BackChannel about how a Wikipedia editor who became a target for trolls fought back by building out more and more pages on powerful female scientists.

Her breakthrough: “What do misogynists hate more than successful women?

This is the new aspirational brand of young womanhood. A gang of women in their teens and twenties who don’t have to wait until their 30s and 40s to “get” sexism and get radicalized.

The Teen Vogue generation could grow up to be the one who finally forces the United States into joining the rest of the developed world and having federally mandated parental leave. Could we actually see that long held feminist dream of subsidized child care coming to pass in the United States?

It’s hard for me to wrap my head around what has changed so greatly from four years ago when Sandberg published “Lean In” and women everywhere nodded their head at the depiction of girls afraid to look smart or take a seat at the table.

Is this a counter trend to the vapid Kardashian selfie movement? The extrapolation of Beyonce’s dancing in front of the word “FEMINIST”? Is it the hell of teenaged social media forging them into impenetrable diamonds? Is it all this hypermasculinity and hyper-sexualization of girls that have forced them to a badass DGAF place?

These magazines’ burst of new life, category wide, is remarkable because for a long time these publications seemed unable to adjust to digital or modernize in any way, giving publications like Refinery29 and Bustle an opening. Now political coverage has lead to viral hits, writers with surging social media followings, and so much buzz that these publications transcend even the huge category of “young women.” These are suddenly publications that middle aged white dudes in DC must own. The White House fears a call from Teen Vogue, Elle, Cosmopolitan, or Marie Claire, more than it fears appearing on Sunday Morning cable news. I don’t remember George W. Bush feeling that way.

We are shocked! Let us be shocked. It isn’t an insult. This is a remarkable achievement and saying women’s magazines have always been this way doesn’t give the women working there enough credit.

To me, the best part about this trend is the heros that female journalists like Lauren Duca have become to young women because they are outspoken, fight back, and don’t take shit. I hope hundreds more follow in their footsteps.

You have to absorb a lot of shit being a female journalist, but if you can get past the trolls (mock, block, move on, repeat) and the hate mail and all that, it’s an amazing hack on working in a male dominated world.

Do you know how few professional women can say that? It’s pretty much just journalists.

Two weeks ago, after my post about Sheryl Sandberg “Leaning Out” I had dozens of conversations with women who said they wish they could publicly amplify my story, but they feared either some sort of retaliation as they’re still building careers in the Valley or simply don’t want to look like they are “playing the woman card.” Many of these women were far more senior in the tech world than me. But they still live under pressure to play the game.

The point of my story was how even Sandberg, herself, was in a bind about speaking out. Facebook could face very real business risks if it is seen as looking hostile to a President Trump regime. Sandberg had to be publicly goaded into backing up a stand on women’s rights that she had chosen built her brand on. A super radical view that women should have equal pay, respect and opportunities as men.

Think about it for a second: The most powerful woman in tech was still in a situation where she couldn’t speak her mind about something this important to her.

It was not lost on me as I wrote that story, how lucky I am to be in a job where I’m not caught between conscience and “fiduciary duty.” They are one in the same.

I hope we’re going to see a raft of startups getting founded by and designed to go after this “girl.” An edgier Birchbox that pairs lipgloss with postcards to send to senators? Dating apps designed from the ground up for the woman’s point of view could take on a whole new importance as a category. Maybe even a social media or messaging app that’s dreamed up by the teenage girl demographic that made companies like Facebook and Instagram so rich, with an eye on how you do it better, with less bullying.

These girls know the consumer Web. They consume it more than any other group. I think they could make it better.

Gloria Steinem famously said men get more conservative as they age; women get radicalized. If the Teen Vogue girl hasn’t been radicalized yet… well, I can’t wait to see her in her 20s and 30s.