I’ve been writing for months that the only battle that will matter when it comes to self-driving cars will be the war over talent.

Depending on your agenda, loyalties, or world views, you can argue any of the 20+ players vying to win the consensus future of how we will get around cities has an edge.

Alphabet and Apple have more cash and own the hardware cars are getting ordered on, but small startups have the ability to be nimble. Automakers understand how to manufacture, market and scale cars on a large scale, but don’t know anything about building a service. Tesla is the only one in the Valley actually making real cars, not just software operating systems. And Uber and Lyft have installed bases of riders and data on rides taken. Google’s WayMo has some of that data via Waze and also has mapping technology.

Everyone has a chunk of what one player will need to actually win this market.

The one thing that is up for grabs from anyone is talent. There’s precious little of it and if you do the math on the Cruise and Otto acquisitions it’s priced at $10 million a head. It’s swapping around like crazy between those big giants, and quitting to start new companies. And why wouldn’t you if the per-head acquisition prices are that great?

To put this into perspective: In a study released today by Silicon Valley Bank, 90% of tech executives say finding talent is either challenging or extremely challenging. The problem is historically so bad in Silicon Valley that once upon a time the largest and most admired companies illegally colluded to artificially suppress engineer wages. That was before the era of unicorns, which has only made it worse. And, the administration’s view on immigrants isn’t helping. Some executives told Silicon Valley Bank they were considering moving offices overseas to be able to hire enough foreign workers.

That’s the normal talent crunch in Silicon Valley. The struggle for autonomous vehicle talent is extreme, even compared to that.

There is every sign that there is going to be insane escalation of the price for talent as this market heats up. There is just so much cash in this fight. Uber has raised more capital than any other startup in Valley history, and yet that near $9 billion is nothing compared to the other companies coming into the fray.

Last week, Ford committed $1 billion to an autonomous car startup called Argo AI, as just part of its strategy. The old economy companies said to be in this fray are worth a combined trillions of dollars.

And that’s nothing compared to the tech giants in the fray.

Last week, Horace Dediu noted that Apple will likely have half a trillion dollars in cash this year, about half of which is cash on hand: 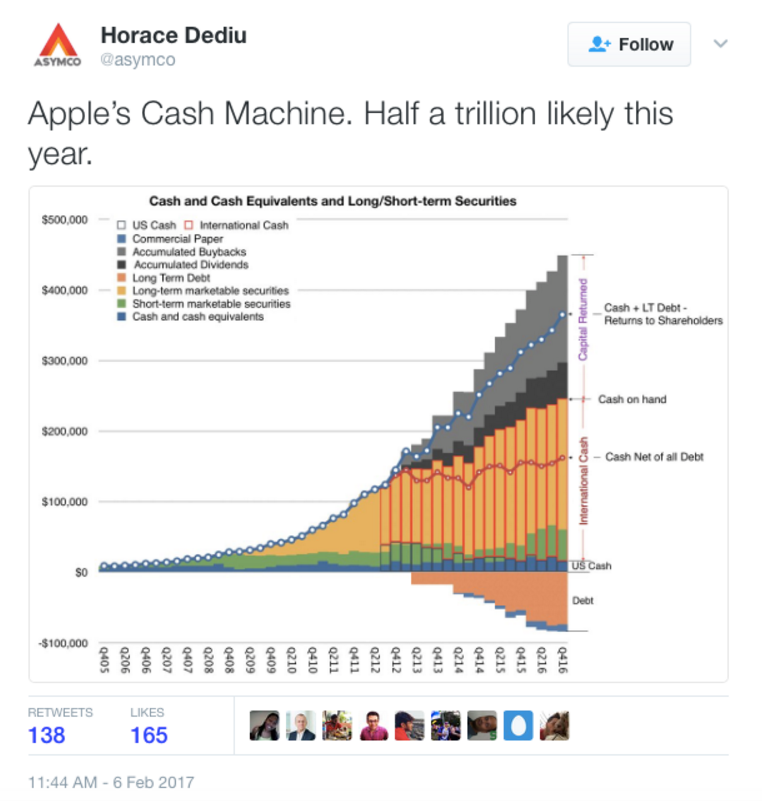 And none of these companies views self-driving cars as a must win market, quite like the startups or Uber and Lyft. Still, if they get remotely serious about winning at all costs, it’s one of the first tech battles where multiple companies can fight as if money isn’t an object.

And this is mostly just the US-centric players. Don’t think China is going to sit this global battle out. Didi Chuxing is already the largest ridesharing company on the planet in terms of volume.

But here’s the thing about talent: It’s not just as simple as how much you can pay someone.

Bloomberg published an insane story yesterday, detailing how Google actually hurt its ability to retain talent by… paying them too much. Google came up with a novel way to pay and incentivize people in this division, in hopes of retaining them. From Bloomberg:

“The payouts contributed to a talent exodus at a time when the company was trying to turn the project into a real business and emerging rivals were recruiting heavily. The episode highlights Alphabet's difficult transition from a digital advertising giant into a diversified technology company with varied groups of employees requiring different incentives. Other new businesses, including health care unit Verily, use different compensation systems too, but they have yet to generate huge payouts like the car project.

The unorthodox system started in 2010, soon after Google unveiled its first self-driving vehicle. It was constructed to tie employees' fortunes to the performance of the project, rather than Google's advertising money machine. In addition to cash salaries, some staffers were given bonuses and equity in the business and these awards were set aside in a special entity. After several years, Google applied a multiplier to the value of the awards and paid some or all of it out...

...Part of the problem was that payouts snowballed after key milestones were reached, even though the ultimate goal of the project -- fully autonomous vehicles provided to the public through commercial services -- remained years away.”

There are a few factors that will motivate talent: Cash, equity, prestige, and reality of shipping.

On cash, any of the large publicly traded companies can compete. For some key positions, Uber likely can too, although its core business is not profitable or public so there are limits on that.

On equity, only startups can compete. 73% of techies think Uber is overvalued and that was before #DeleteUber. And it still needs to raise more cash before it goes public, so joining now offers little clear upside.

Prestige is subjective, but I’ve argued before I think Tesla has the edge here, as Elon Musk is easily the most admired tech leader in the world right now. Automakers most certainly don’t have an edge. Uber is particularly challenged among the tech set. There was already plenty of evidence-- anecdotal and otherwise-- that Uber is not a widely admired company that people want to work for. And that was before employees had to walk past protesters to get to work. That was before an angry Indian drivers strikes, prompted by a common Uber practice of promising higher wages than it actually delivers. (In the US, the FTC fined Uber $20 million for these kinds of deceptive marketing practices.)

Reality of shipping? It’s hard to asses because everyone in transportation is suddenly dealing in Vaporware. Even that $1 billion Ford investment had the fine print of being doled out across five years.

No one seems to know how committed Apple is or isn’t. Auto companies have been aggressive, but come on. Most of the tech companies have given up on making cars, but we think auto companies are going to build sophisticated, consumer-facing ridesharing services that beat Silicon Valley’s? It’s the most unlikely scenario, in my mind.

Google was the earliest in the autonomous vehicle game. Google has maps. Google has a carpooling service operating via Waze now.

Tesla has cars with these capabilities in the hands of owners now.

Those two seem to have the edge to me, and according to a survey of tech insiders by the Atlantic shows I’m not alone: 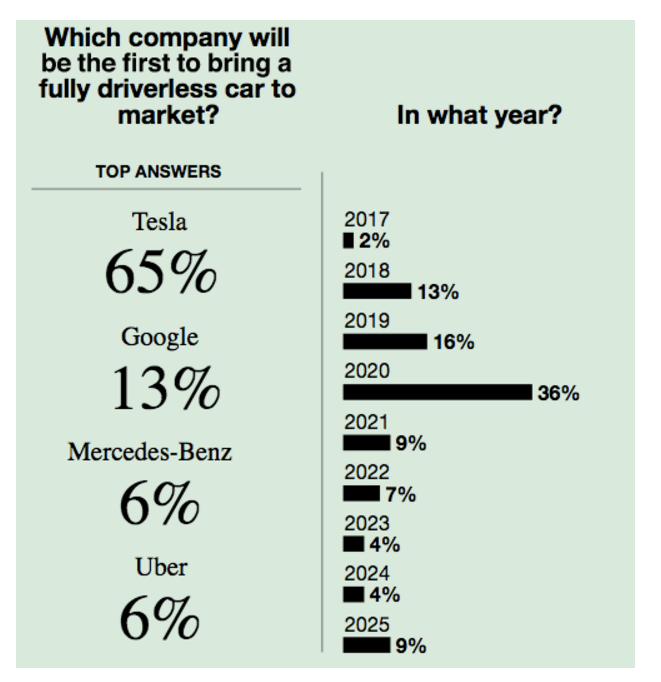 And only one company -- Uber-- has said winning self-driving cars is “existential.”